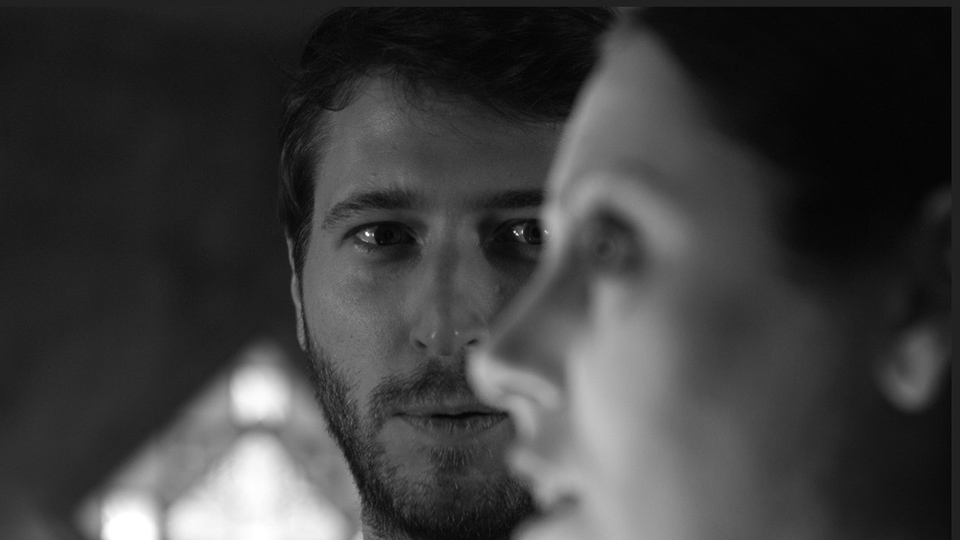 Handyman Jack (MacLeod Andrews) is hired to clean a house and get to the bottom of why its owner is struggling to keep tenants. Jack enters the house when the latest family cuts short their lease and he camps out there while he carries out his work. With his own issues filling his head, Jack is surprised to learn that a ghost – or spectral agent as she prefers to be known – called Muriel (Natalie Walker) is haunting the house to drive people away. As Muriel steps up her attempts to get rid of Jack, he unexpectedly starts to fall for her.

A Ghost Waits is the feature film debut of writer and director Adam Stovall. As with any first films, particularly those from independent film-makers, this effort has its fair share of issues but it has a considerable amount going for it too. The premise is a sound one with Jack making an instant impact on the audience as a likeable lead that you want to root for. Following the initial set-up where you see a family driven from the home, the film switches gears as it gives Jack time to acquaint himself with the house. There are spooky occurrences going on around him, which he largely doesn’t notice, and they are enough to hook in the viewer.

It’s made clear from the outset that Jack is a bit of a loner who feels that he does plenty for other people without ever getting anything in return. This is shown through a series of phone calls that leave him increasingly frustrated as he asks for favours and is frequently turned down. All the while Muriel is creeping around the house and she doesn’t reveal herself to Jack for around 40-minutes, which I thought was a little too long a wait. It made the second half of the story, where Jack falls for Muriel and a sub-plot around Muriel’s inability to get Jack out of the house felt a bit rushed, making it hard for me to buy into what was unfolding.

The single biggest issue with A Ghost Waits is that it tries to do too much. The introduction of the spectral agency, while an interesting idea, doesn’t have the opportunity to breathe in the short run-time of the film. It also distracts from Jack and Muriel, which is the plot you want to see more of and that you buy into once the two become known to each other. I’m also not entirely sure why the film was shot in black-and-white. I didn’t mind that it was, it’s just that with the story set in the modern day, I was a little confused as to the reasoning behind it.

In MacLeod Andrews, Stovall has a very strong leading man. He impressed me in last year’s The Siren, and he gets the chance to show off his comedic skills here. Andrews is very charismatic and he pulls the audience on side very quickly. Unfortunately, he’s not matched by Natalie Walker as Muriel. She can’t bring the same depth to her performance that Andrews manages, and that results in a lack of chemistry between the two. Still Andrews has a much bigger role in the film than Walker so there’s still enough there to hold your interest when the cracks start to show.

For a feature debut, Stovall gets a lot right. His casting of Andrews is a winner, the premise of his story is sound and the screenplay, for the most part, is solid. With a bit of tweaking to the pacing and a better matching of the on-screen talent in terms of chemistry and ability, A Ghost Waits would have been elevated. Most importantly though, Stovall shows promise and I’m certainly keen to see what he comes up with next.