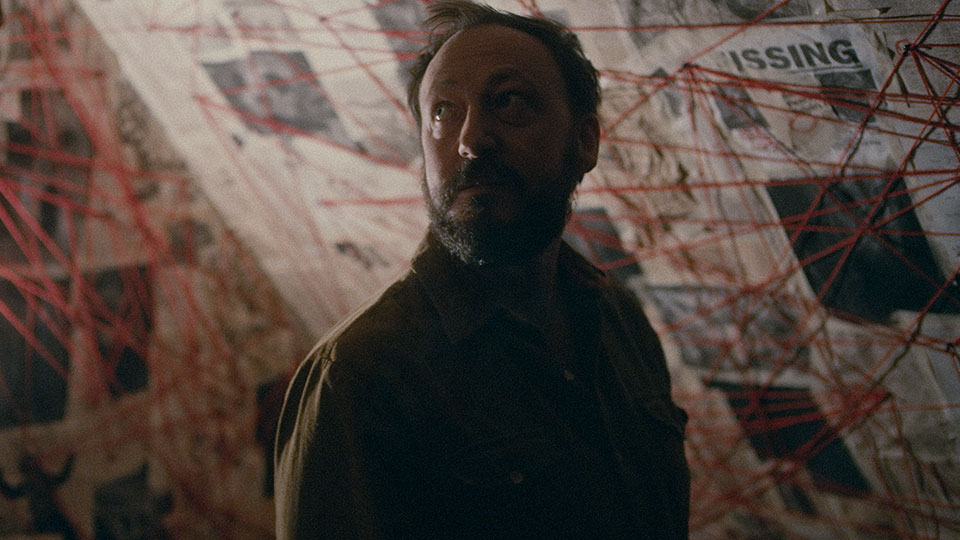 Steve (Scott Poythress) lives alone in a remote house and is surprised when his brother Matt (AJ Bowen) and his wife Karen (Susan Burke) turn up unexpectedly to spend Christmas with him. Despite his best efforts, Steve can’t convince them to leave. As Matt and Karen attempt to pretend everything is normal, even though Steve is on edge, they are shocked to discover that Steve has a man locked in the basement. Steve insists that the man is actually the devil but his family don’t know if he’s telling the truth or suffering from a paranoid delusion.

I Trapped the Devil is the directorial debut of Josh Lobo, who also wrote the film. Centring on just three characters, the film is a deep dive into paranoia as Steve, Matt and Karen try to separate truth from fiction. To Matt and Karen, it’s clear that Steve has had a psychotic break and kidnapped a random man, but to Steve, he’s caught the devil and warns that if he’s let out all hell will break loose. As Matt tries to get through to his brother, Karen is left to wander the house piecing together a series of disturbing finds.

Lobo does a good job of keeping you on edge. The whole films hinges on the man trapped in the basement and Lobo cleverly ensures that the audience switches their point-of-view between the three characters. You’re willing to go along with Matt and Karen but then doubt starts to creep in that perhaps there is some truth in what Steve is saying. Perhaps if the man in the basement isn’t the devil, maybe he’s someone that’s done something truly heinous so keeping him locked up would be beneficial to everyone.

The dynamic between Steve, Matt and Karen continually shifts throughout the film. Karen is the most gung-ho of the trio, sure that the police needs to be called and Steve carted away so they can release the man in the basement. Matt is pretty much in agreeance to begin with but as he communicates with his brother, and sees his deep-rooted fear, siding with Karen doesn’t seem like such an obvious choice.

The three leads are fantastic, bringing the family history to a nice simmer as the tension between them rises. Scott Poythress gradually falls over the edge while AJ Bowen and Susan Burke are the sense and reason of the piece. As the three actors are required to evolve the stance of their character, things get more and more interesting.

What lets the film down a little is that once you put the paranoia and tension to one side, there’s not much else going on here. The climax will inevitably be divisive, as it always is with this kind of film, and the expectation of any real answers is likely to be disappointing. Lobo chooses style over a substance a few too many times here and that’s a real shame.

I Trapped the Devil is a slow-burn psychological thriller that definitely succeeds in drawing you into with its ever-increasing tension. Unfortunately, the payoff isn’t quite worth the journey, despite the stellar performances of the actors, and when you get to the credits, you may be left wondering what the point was. There’s enough here to make you want to see what Lobo does next but I Trapped the Devil doesn’t pack the punch it needed to fully soar.

I Trapped the Devil will be released by FrightFest Presents on 21st October 2019.