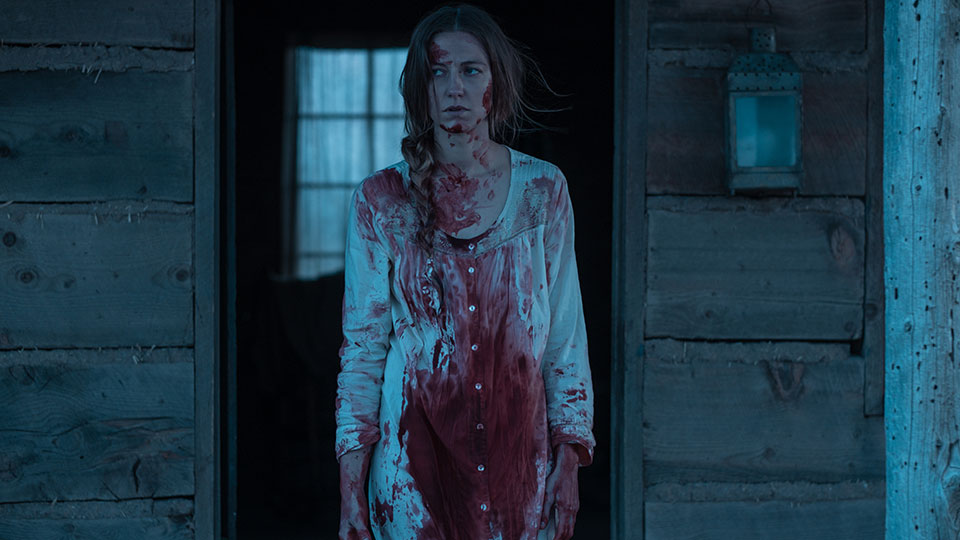 Lizzy Macklin (Caitlin Gerard) and her husband Isaac (Ashley Zukerman) live on the plains in the late 1800s. Used to living in peace and recovering from the loss of their child, the couple is surprised when Gideon Harper (Dylan McTee) and his wife Emma (Julia Goldani Telles) take up residence across the way from them. As the couples get to know one another, tragedy strikes and Lizzy can’t tell if there’s a dark force at work or if she’s on a rapid descent into madness.

The Wind is a slow-burning and unnerving film from director Emma Tammi that unravels in a seemingly random way. Choosing not to deliver its plot in a linear way, The Wind jumps back and forth through time in a bid to make you feel as confused as Lizzy is. Left alone in her home when Isaac goes to get supplies, Lizzie replays a tragic incident over and over as she becomes convinced that the wind signals the arrival of a demon that’s going to wreak havoc.

The lack of a linear narrative will likely put some viewers off. Add to that a rather glacial storytelling pace for much of the film and The Wind will most definitely not be everyone’s cup of tea. This is a psychological horror and while there is some blood, violence and gore, and for that matter scares, aren’t the order of the day. Instead The Wind is an exploration of one woman’s fight to keep her sanity when he world seems to be falling down around her and she’s clinging on to whatever normality she can.

Pivotal to the story is Lizzy’s relationship with both her husband Isaac and newcomer Emma. The loss of a baby has clearly taken its toll on Lizzy and Isaac’s marriage and the arrival of Emma gives her a firm friend, the likes of which she’s not used to. It doesn’t take long before that friendship sours though and Lizzy’s paranoia battles to get the best of her. I thought the dynamic between the three characters was one of the film’s most interesting parts and the way bits were revealed at random, held my interest.

A showcase for Caitlin Gerard, The Wind really lets her flex her acting chops. She gives a nuanced and layered performance, making Lizzy incredibly sympathetic but also giving her an edge that stops you from completely trusting her. Gerard excels in the more emotional moments of the film and she impresses when Lizzy needs to be tough. While there are a handful of other actors in the film, it’s really all about her performance.

The Wind isn’t as effective as it could have been but it’s a decent enough watch. As long as you’re not expecting something fast-paced and punchy, you’ll be happy to go along with the story as it slowly unravels. There are intense moments along the way but there’s never anything truly terrifying and that’s a bit of a shame. The Wind has lots of good ideas but it never quite capitalises on them, which let me having enjoyed the film but feeling it could have delivered so much more.