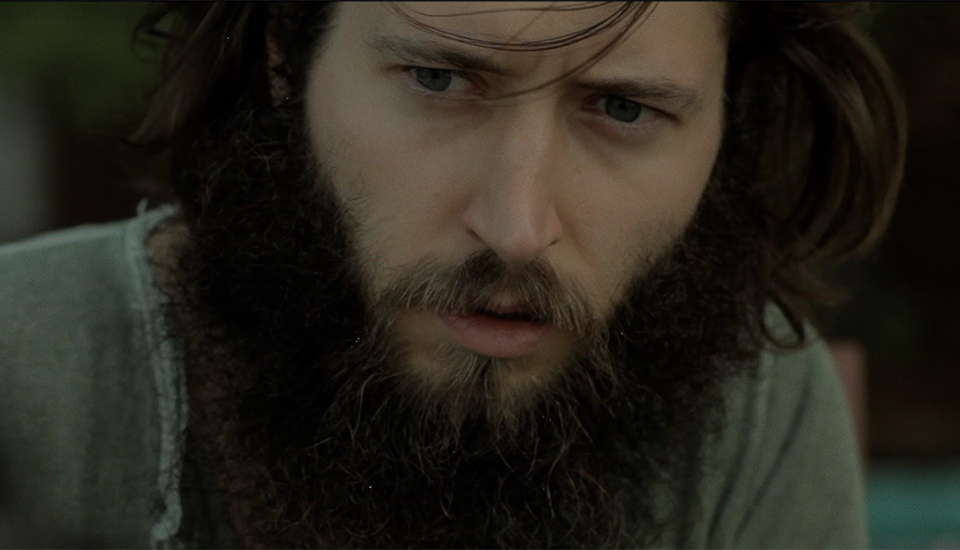 Tom (Evan Dumouchel), a mute Christian man, hires a cabin next to an expansive and beautiful lake. He has trouble getting the power to work in the rental so he asks local Al (MacLeod Andrews), a man who lives near by and whose husband drowned in the lake. The two men strike up a friendship but the arrival of the mysterious Nina (Margaret Ying Drake) threatens to cause a rift between them. As Tom becomes infatuated with the beautiful water-bound woman, Al starts to realise she could be the monster he’s been searching for that’s responsible for his husband’s death.

The Rusalka is an unusual and mesmerising film by writer/director Perry Blackshear. At its heart it’s a monster story but it’s also a tragic love story that easily lets you get swept away, putting the darker elements of it to one side. The build-up to Nina’s introduction is superb as Tom suspects that someone is lingering around his cabin but he doesn’t manage to find out who for a little while. He notices hand prints on the concrete and hears strange sounds, and during that time he learns about the death of Al’s husband.

Once Nina and Tom meet, the tragic love story begins and Blackshear makes you root for this unlikely couple, in spite of Nina’s actions. She’s a creature that has to stay in the water to survive but she’s overcome by the desire to drown people. That directly conflicts with her feelings towards Tom and through daydreams, we see the life she is desperate to build with the handsome stranger. That works well in ensuring the audience becomes emotionally invested. The level of dread you feel as the film progresses when you realise a happy ending is very unlikely, is intense.

While the love story unfolds, Al starts piecing together what really happened to his husband and he becomes obsessed with Nina once he suspects that she was involved. That plot line acts as a ticking time bomb throughout the film and you know it’s only a matter of time before it comes to a head.

Something I found really interesting with the film is the way that it turns a few horror tropes on their head. Nina, as the only female in the main cast, is in no way objectified, and there’s a nice moment where she’s observing Tom as he undresses in his cabin. I also found it refreshing how the villain of the piece was a woman and that she was so layered and complex. It would have been so easy for Nina to be two-dimensional but thanks to Margaret Ying Drake’s performance and Blackshear’s writing and direction, she’s so much more than that.

The three central performances in The Rusalka are magnificent. Margaret Ying Drake manages to switch from innocent to malevolent within seconds while MacLeod Andrews is quietly unnerving as the grief-stricken Al. The standout for me though is Evan Dumouchel who puts in a remarkable performance as Tom. Playing mute is no easy task and Dumouchel is so expressive, even without his voice. Tom is the character I really invested in, and it’s his story that kept me riveted to the very end.

The Rusalka is a very different kind of horror movie and that’s one of the things that makes it stand out. The direction from Blackshear is masterful, the cinematography beautiful, the music gorgeous, and the performances outstanding. If you like monster movies, you’ll appreciate the wonderful twist The Rusalka puts on the genre and even if you don’t, you’ll get caught up in Blackshear’s superb skills as a film-maker.

The Rusalka will be released on DVD as part of the FrightFest Presents range by Signature Entertainment in June 2019.