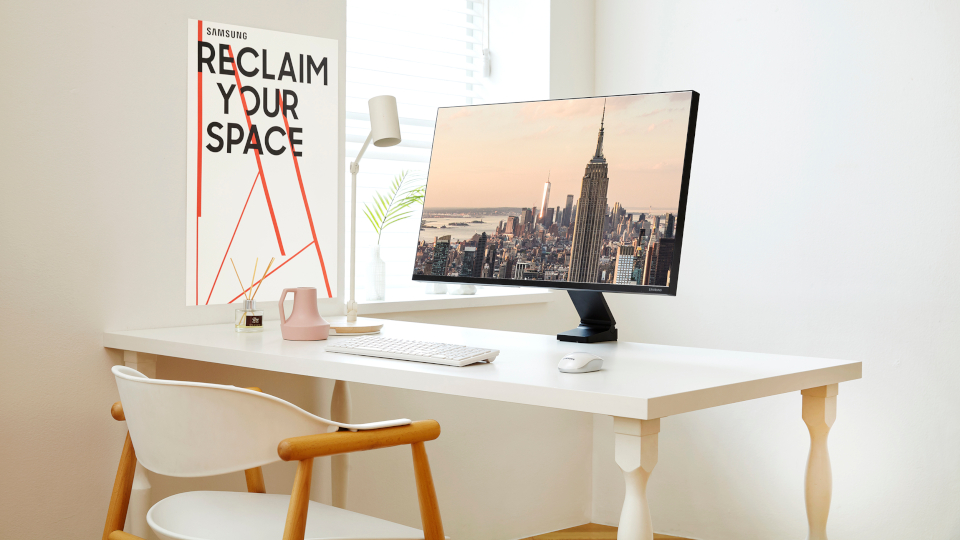 Monitors have come a long way over the years, they used to be massive lumps of plastic that would take over most of your desk space. Thankfully LCD screens are now much more affordable and take up much less space. Samsung are taking this space saving to the extreme with the new Space Monitors. The Space Monitor comes in two sizes, 27-inch and 32-inch. We’ve been given a 32-inch display, which currently sells for £439, to have a play with.

Inside the box, you get the monitor, the arm, an HDMI/power splitter cable, power brick, back plate and instructions. Setting up the monitor is really simple. Four screws attach the monitor to the stand and the stand simply clamps to the edge of your desk. It is worth noting that the clamp won’t be suitable for all desks out there though. The clamp will fit desks with a thickness of up to 90mm but any more than that and this is no good for you. You could also struggle if your desk has any impediments underneath where the clamp will sit so keep this in mind before making a purchase.

The arm itself is incredibly sturdy and is very easy to move, whilst being very easy to change position at the same time. Not once did I experience the monitor moving on the stand on its own. There are some limitations, however. To adjust the height means moving the monitor closer or further away from you rather than simply vertically. You also can’t rotate the monitor so it can’t be used in portrait mode. You should also consider how flat your desk (or the floor it sits on) actually is given the lack of rotation. It turns out that my floor isn’t as flat as I though resulting in the monitor sitting at a slightly off angle.

The monitor itself continues with the minimalist design concept. There are three bezel-less sides and the complete lack of buttons gives it a sleek look. Rather than buttons, there is a joystick mounted on the back of the monitor which is used to navigate its menus. On the back of the monitor, there are only two connection (HDMI and mini-DisplayPort) options which might be an issue for some people, plus there’s the power port and one USB port.

You’ll notice in the list of ports that there is no option for connecting audio in or out, no USB-C or Thunderbolt either so this is also something to keep in mind depending on your requirements. Personally, I would have expected more connection options given the price of the monitor.

In terms of visual performance, the monitor is great for everyday tasks and 4K content looks great. Comparing the spec of the Space Monitor with other similarly priced options it does fall slightly short although I’m not convinced a normal consumer would really notice. If you want a monitor with the best possible spec then you might want to consider something else. If the clutter free aspect of the monitor is what you’re interested in then look no further.

It also lacks in the spec department if you are a gamer. The refresh rate is capped at 60Hz and there is no support for FreeSync or G-Sync. Once again if you are after the best possible spec for gaming this isn’t the screen for you.

In the last two paragraphs I’ve described who the Space Monitor isn’t for, so who exactly is going to want one of these? I feel that the Space Monitor is being aimed at the design savvy out there, people who want great, minimalistic looks and want to free up space on their desk when the screen isn’t being used. I was genuinely surprised how big my desk actually felt with the monitor pushed all the way back. Overall the Space Monitor is a great looking piece of kit with a good enough spec for most users out there, but there are also quite a few limitations to keep in mind before diving in.

For the full list of specs head over to the official Samsung page.

In this article:Samsung, Space Monitor