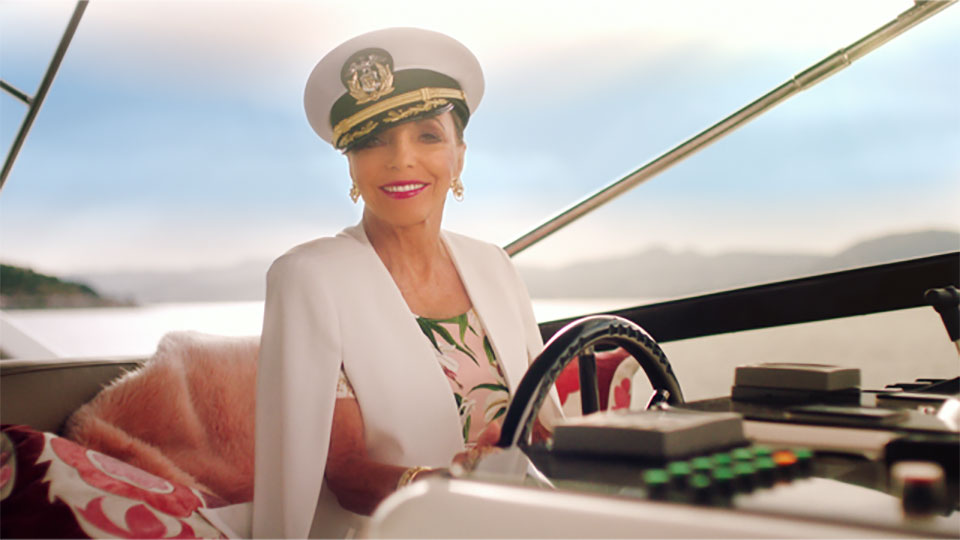 Three UK has teamed up with Hollywood icon Dame Joan Collins for their ‘ditch and switch’ social media campaign.

The campaign comes as new legislation takes effect allowing mobile customers to switch networks by by simply sending a free text message, which enables them to move networks as quickly as one working day.

the fab @joancollinsdbe has never settled for a relationship or 📱 network that didn’t… float her boat 💁🏻‍♀️. it’s never been easier to switch, so jump ship to @ThreeUK & live your best life. all aboard, darlings 👉 http://bit.ly/SwitchToThree (link in bio) already onboard? we salute you 👊

In the advert Collins draws on her dating experience to encourage viewers to take control and not stay in an unsatisfactory relationship. The Golden Globe star is seen living the high life on-board a yacht in sunny St Tropez, with playful nods towards the benefits of choosing ‘the one’, before she turns to the camera to say: “I’ve never settled for anyone or anything which didn’t float my boat… It’s now easier than ever to switch. So darling if they’re not satisfying you, then just… ghost them. So, take control – ditch and switch to Three.”

Dame Joan Collins said: “Having been married a few times, I can tell you now that staying with someone just to be in a relationship won’t make you happy. It took me a long time to find ‘the one’ because I was never ever going to settle for second best. The relationship you have with your mobile network shouldn’t be any different – when you start to feel unloved, dissatisfied and you can’t see past those niggles, it’s time to move on, darling.”

Shadi Halliwell, Chief Marketing Officer at Three, said: “We could all do with being a little more ‘Joan’ and not settling for anything less. And now is the time to take action – it’s never been easier to switch networks.

“Our network has always been built for data and now we’re building the UK’s fastest 5G network*. Our customers use more than 3.5 times more data than the industry average and that’s only going to increase. With the launch of 5G on the horizon and two awards in our cabinet – Best Network for Data and Best Network for Roaming – Three is the obvious choice!”

Mobile customers can get the code they need to switch networks by simply sending a free text message – rather than having to call their current provider – and can switch mobile networks.

Three is currently offering new and upgrading customers six months half price line rental, on its Unlimited tariff (24 month Advanced Plan). This offer is available now until 22nd August, on a range of handsets, Home, Tablet and SIM only plans.

For more information about switching to Three, visit www.three.co.uk/switching.

In this article:Dame Joan Collins, Three