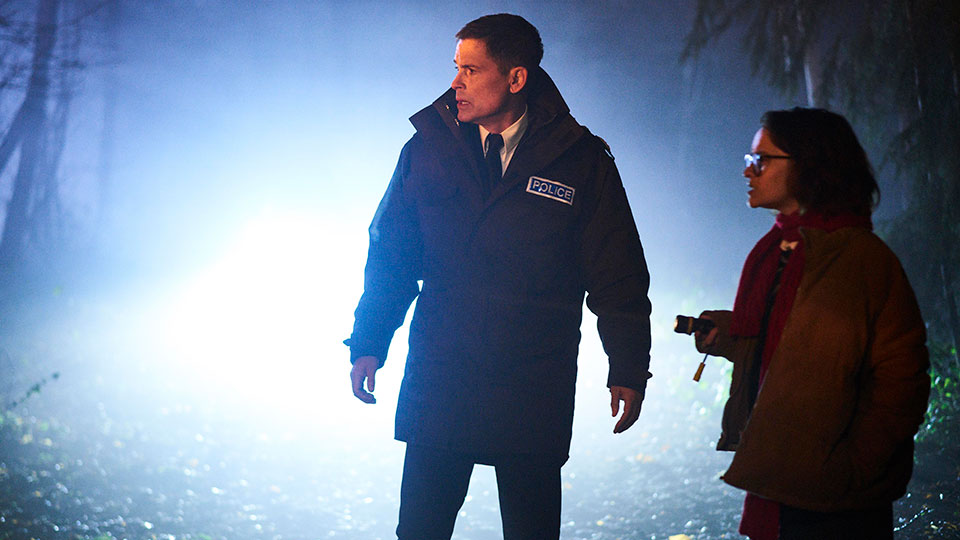 The discovery of a body between two rival farms was the case that Bill (Rob Lowe) was tasked with solving on the latest episode of Wild Bill.

Bill was driving Kelsey (Aloreia Spencer) to school when he came across a road block and found out about the dead body that had been discovered. The team let him through as they continued to investigate the crime scene.

Muriel (Bronwyn James) was told that the victim didn’t die where his body was found and that his fingerprints had been burned off so they couldn’t identify him.

After dropping Kelsey at school, Bill headed to the station and was immediately accosted by Lydia (Anjli Mohindra) over his decision to let one of the team go. Bill answered her in a steely way, not taking his eyes off his computer screen.

Sean (Anthony Flanagan) returned to the farm to meet with Ray Gilchrist (Con O’Neill) one of the farm owners, who was carrying a wooden cross. Asking questions about the body, Sean didn’t get much out of Ray.

Muriel went to see the people that owned the other farm and she upset the woman in charge, Audrey (Lisa Palfrey) by saying that the body was found on her property. Their conversation was interrupted when Lisa (Angela Griffin) turned up to interview Audrey.

Keith (Tony Pitts) had a meeting with Bill to get an update and ask him to get Audrey on side as his would do him a favour. Bill then watched a video of Audrey ranting about being robbed 8 times over 2 years.

Bill headed to see Audrey and got a minor electric shock from the gate at the front of her property. Audrey wasn’t very receptive and joyfully pointed out that where he’d parked his car, would make it impossible for him to drive away without a tow truck.

Muriel called Bill to tell him the victim was William Mowbray and after he got that information, he hung up on her. His attention was drawn to some pallets and he discovered a bloody spade hidden among them. As Bill made that discovery, he heard a gun being loaded and turned to see Audrey pointing it at him.

Audrey was taken in for questioning and set the tone by spitting in the coffee she was offered. Muriel tried to appeal to Audrey to get her to talk but was met with resistance. Audrey made it clear that she’d kill anyone who tried to rob her farm and she attempted to leave. Bill stopped her telling her that they’d found the murder weapon, only to be contradicted by Muriel who told him the blood was actually from a pig.

Audrey pointed Bill to the Gilchrist family who owned the rival farm. Bill found out more about the family from Muriel and told her that he wouldn’t look where Audrey was trying to send him.

Bill had lunch with Mary (Rachael Stirling) who gave him the backstory on the rivalry between the farms, which had been going on for years. The conversation soon turned to Kelsey with Bill explaining that he hadn’t told her about their relationship yet.

At school Kelsey was bullied by a group of girls but made friends with a boy called Alex (Esha Gopal) who warned her to keep her father’s identity a secret.

Muriel went to see Will’s sister who explained that Will was often taking drugs and calling her when he was out of it. She made a comment that if she had a pound for every time Will called her while high, she would have been able to get her and her younger brother Scott (Felix Butterwick) out of Boston.

Bill picked Kelsey up from school and Alex rode back with them. Kelsey explained that Alex was gay, which made Bill feel better about having a boy in his home. Muriel was waiting to tell him her latest discovery and she told him she didn’t think Scott had murdered Will, but she did think Scott may be dead.

Muriel and Bill oversaw a search between the farms and were met by an aggressive Audrey. A ring had been found and Will’s sister was on the site helping look for her brother. Bill and Muriel then went to see the Gilchrist’s to ask if they knew or had seen Scott, and Muriel pressed Ray for answers. She pointed out that he had anger issues and he told her that he’d atoned for his past discretions.

When Muriel asked Ray if he recognised the ring, and Bill suggested they leave. As they chatted about Ray, Bill and Muriel were told that a car had been found. Suspecting that Scott may be in the car, Muriel tried to call his phone and they heard a ringing in the boot. Bill broke into the car to open the boot and they found Scott’s phone and realised it had been planted there. The family who the car belonged to looked on in horror.

Bill picked up takeaway and got home to find that Kelsey and Alex were gone. He tracked them down in the woods where Alex had revealed he was friends with Scott. They found rubbish burning in the woods but no sign of Scott. Bill took Alex home, discovering that he was Lydia’s son, and that added further tension between the already warring colleagues.

The next day Lydia tackled Bill about the redundancies and he changed the conversation to the murder. Bill went back to the woods to see the remains of the belongings that had been burned and he spotted Audrey driving away so he followed her.

At the station Muriel was researching the Gilchrist’s and see saw an old photo of Albert Gilchrist (David Hargreaves) with a woman who was wearing the ring they’d found. Lydia then presented some information about who had worked on the Gilchrist farm, causing Muriel to dash out of the station in glee.

Bill went to the church that Ray had been making crosses for and saw it had a history with the Gilchrists and with Audrey’s family. Bill’s next stop was to see Audrey where he revealed that he knew that Audrey was going to marry Ray and then accused her of murdering Will. Audrey ignored him and asked him to leave.

Muriel tackled Ray after finding out that he hired ex-convicts and she caused him to have a meltdown while Albert dropped some cups.

Bill was joined at Audrey’s farm by PC Drakes (Divian Ladwa) and they looked around the premises while Audrey was gone. Climbing to investigate an electrified hatch, Bill found Will’s fingerprints burned onto it and behind it was a surveillance room where he found an empty ring box. Continuing to investigate, Bill found Scott on a dirty bed and was held at gun point by Audrey.

Scott revealed that Will had abandoned him and Audrey, who admitted she had wanted to kill both boys, said the last time she saw Will was when he was running towards the Gilchrist farm. Audrey confided in Bill that her father had told her that Ray wanted to marry her so he could get her family’s land put in his name.

Muriel spied on the Gilchrist’s and she saw Ray inspecting a spade. He tried to run away with it but Muriel stopped him. Albert rushed at Muriel and hit her with the spade before winding Ray with it too.

Bill arrived in the nick of time and it was revealed that it was Albert who had killed Will. Ray stopped Albert from hitting Bill with the spade, and Bill dashed over to help Muriel.

Albert was arrested and Ray told Muriel and Bill that he didn’t know what his father had done. He admitted that when he discovered the shovel, he realised what had happened. Audrey watched from afar and pulled out a necklace that had the missing stone from the ring on it.

Later that day, Bill went to see Mary and smooth things over. As they were talking he saw Mary’s ex-husband walk past and he made a quick exit. Kelsey was waiting in the car and he told her Mary wasn’t hungry before they drove off.