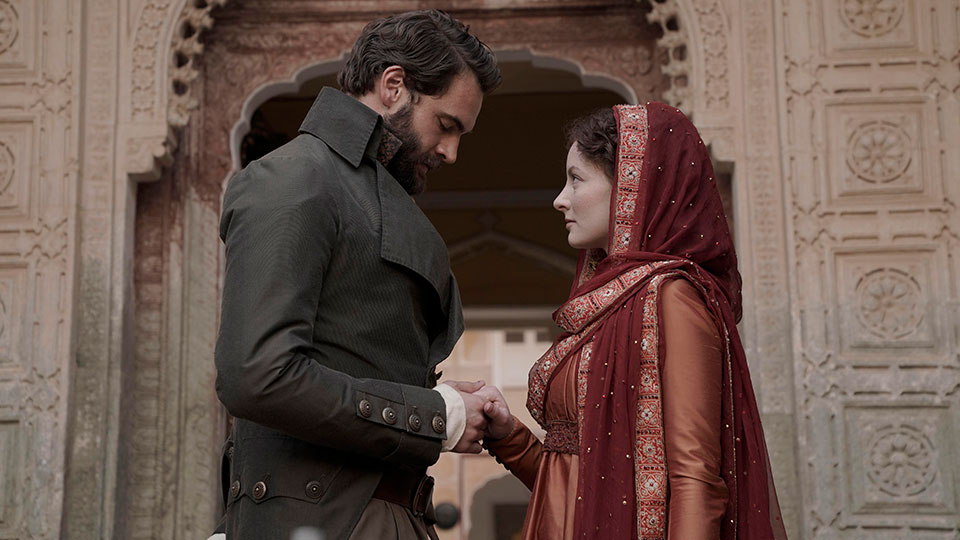 Beecham (Tom Bateman) set his sights on solving a murder on the latest episode of Beecham House.

Henrietta (Lesley Nicol) and Violet (Bessie Carter) were escorted to the kitchen to inspect the ingredients going into the food they were eating. Both women were shocked to discover they’d been drinking buffalo’s milk rather than cow’s milk.

Beecham returned home where he was greeted by Baadal (Viveik Kalra). He asked if Margaret (Dakota Blue Richards) had been to visit and was disappointed to find out that she hadn’t. Margaret meanwhile was discussing leaving India with Roshanara (Medha Shankar) who told her she should stay around as Beecham would eventually marry her. The conversation moved on as the women went to see the Empress.

Roshanara received a dressing down from the Empress for her forceful nature and Margaret was made to feel like a failure as she wasn’t married. Asked to stay to teach the Prince, Margaret tried to decline but Roshanara accepted on her behalf.

At the house Henrietta continued to complain that August didn’t look English enough, suggesting they put him in a suit to rectify the situation.

Chandrika (Pallavi Sharda) notified Beecham that it was time for August to try solid food, explaining it was a custom that they had to honour. He agreed but looked concerned after she left the room.

Castillon (Grégory Fitoussi) met with Samuel, who admitted that Beecham had no idea he was there. Samuel tipped Castillon off about the present that was due to arrive for the Empress and he refused to be drawn on his reasons for betraying Beecham. He did explain that if Beecham was refused his licence, he would have to return to England which is what Samuel wanted.

Henrietta panicked when her opium ran out and she asked Violet to help. Seeing an opportunity, Violet asked Henrietta to help her gain Beecham’s affections. When she was met with resistance, Violet made it clear that she would only get opium for Henrietta, if she helped her first.

Chanchal (Shriya Pilgaonkar) was interrupted by Ram Lal (Amer Chadha Patel) when he saw her getting close to Daniel (Leo Suter). He reminded her that she had a duty to August and shouldn’t be using the baby for her own pursuits. She ignored his words and made plans to rendezvous with Daniel somewhere more private. Baadal watched on in silence.

At breakfast Henrietta tried to make Violet more appealing to Beecham but her efforts fell on deaf ears. She then turned her attention to Daniel telling him to stop being friendly with Chanchal. Beecham agreed with his mother telling his brother to keep the relationship kind but formal. Daniel responding by saying he would be leaving as soon as his wound healed.

Beecham and Samuel went into town to find Gopal but he was nowhere to be found, nor was the statue. He spoke to a local man asking about Gopal’s whereabouts and was told that he may be on the next boat in a couple of days. Beecham realised something was wrong after revealing Gopal had written to him to confirm that he would be on the boat.

Chanchal and Baadal visited the bazaar and he asked a local trader to show him his best fabric. Looking over her shoulder, Chanchal saw Daniel and found a way to sneak off to see him leaving Baadal in the market. On a rooftop Chanchal and Daniel found some privacy but when he leaned in to kiss her, she pulled away. Baadal went looking for Chanchal and saw her on the rooftop with Daniel.

Determined to find out what happened to Gopal, Beecham continued to push the local man for more information. When the man refused to help him, he explained that if Beecham wanted to complain he would have to do so to Castillon. As they were walking away, a commotion attracted Beecham’s attention and it was revealed that Gopal’s dead body had been found in the water.

At the house August’s rite of passage was taking place. Beecham arrived as it was beginning and Henrietta was very uncomfortable watching the ceremony take place. He fed his son solid food while Henrietta continued to loudly voice her opposition.

Beecham delivered the bad news about Gopal and vowed not to rest until he found out who had been responsible for his death.

With Samuel by his side, Beecham went to visit Castillon who was wrestling whilst being cheered on by a lively crowd. Winning his match, Castillon washed and dressed while Beecham demanded to know what happened to Gopal and his statue. Castillon played hardball as Beecham grew frustrated, knowing that he had the statue, and he taunted Beecham to leave Delhi whilst he still had his life. Beecham responded by threatening Castillon.

Beecham’s next stop was to see Margaret, who informed him that her return to England had been delayed. He confided in her about Gopal’s murder, explaining that the gift for the Empress was stolen and pointed the finger at Castillon. Margaret didn’t want to believe what she was hearing but offered to speak to Castillon on Beecham’s behalf. The two held hands and shared a tender moment.

Violet ventured out to the bazaar to get the opium for Henrietta. As she left, she was attacked by a man but fought back pushing him to the ground and stamping on him. When she arrived back at the house, Beecham was on hand to help her and she played up her injuries, giving Chandrika a cheeky smile as she passed her.

Daniel lured Chanchal for another private meeting and she expressed her sadness over Gopal’s death. Her grief pushed her to make a move on Daniel and the two finally kissed with Baadal witnessing it.

Margaret stayed true to her word and manipulated Castillon to find out if he was involved in Gopal’s death. She played dumb when he mentioned about Beecham’s shipment being stolen and realised that Beecham had been telling her the truth.

Worried about finding another gift for the Empress, Beecham and Samuel agreed to divide and conquer to secure a replacement.

Henrietta apologised to Violet but she admitted that Beecham’s concern made the ordeal worthwhile. Daniel interrupted them and started asking questions about what Violet was doing at the bazaar.

Margaret rushed to Beecham to tell him that Castillon was definitely behind Gopal’s death and the missing shipment. She shared information as to where the statue could be and suggested a time when it would be unguarded so Beecham could get to it.

Beecham, Ram Lal and Daniel hunted for the statue while Murad (Adil Ray) entertained the Prince that was a potential husband for Roshanara. Beecham found the statue and he was almost caught from stealing it back.

Back at the house, Samuel shared the gift he’d found with Beecham and failed to hide his shock when Beecham announced that he had retrieved the statue. Daniel picked up on Samuel’s reaction and looked at him warily.

Beecham presented his gift to the Emperor (Roshan Seth) and it was received warmly. The Emperor declared that the Empress approved. Margaret introduced Beecham to the Empress and in return Beecham took Margaret to a quiet place to thank her for her help and he kissed her hand. The Empress looked on and pondered how Beecham could have afforded her gift.

Chanchal and Daniel gave in to their lust and had sex. As they lay together, they were disturbed by Henrietta who appeared to be sleepwalking in the grounds. Chandrika visited Beecham in his bedroom, while a shocked Violet watched from the other end of the corridor.