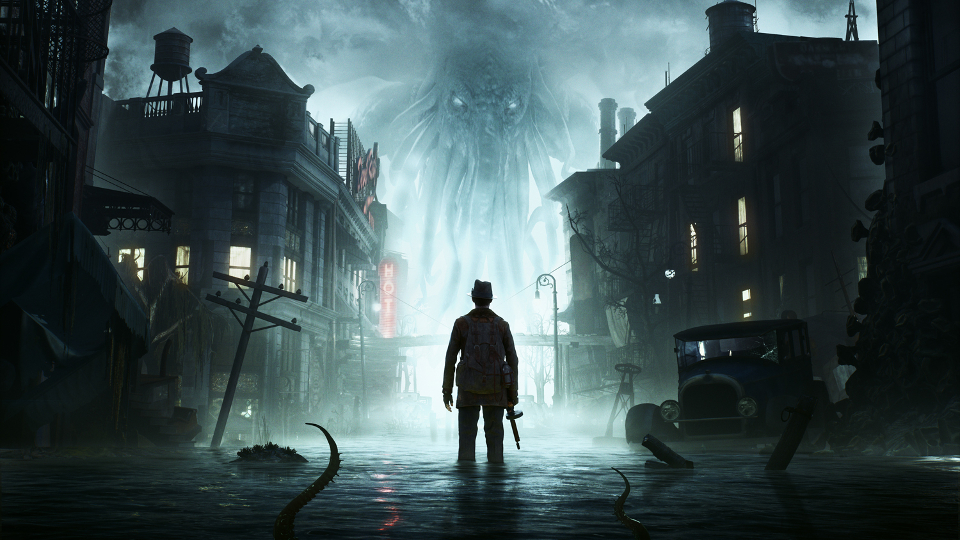 I’m a big fan of H.P. Lovecraft’s Cthulu mythos and enjoyed Frogwares Sherlock Holmes titles. The Sinking City is their biggest project yet. Can it rise above the tide or is it another drop in the ocean?

Charles Reed was once a diver in the US Navy and during the Great War, discovered something in the watery depths. He is plagued by nightmarish visions and has been given supernatural abilities. To make use of this gift, he became a private detective and makes his way to the city of Oakmont where reports of citizens with the same afflictions reside. Seeing this as an opportunity to find out why he’s like this, he arrives at Oakmont to find it on the cusp of sinking into the ocean and strange creatures calling it home.

View the launch trailer for The Sinking City below:

The introduction paints Reed as a troubled veteran and a skilled detective. It’s classic noir and Lovecraft, great for both fans and newcomers alike. You’re thrust into this city, where you are hated as an outsider, even more than the deformed humans and monstera. As soon as you arrive, Robert Throgmorton, head of one of most powerful families in the city, gives you your first case. This first case shows you the madness that has plagued the city but unfortunately The Sinking City struggles to keep pace. The story is interesting and written fairly competently but between the main and side content, things get repetitive fast. Everybody is negative and downtrodden and while it makes sense in the mythos, the constant dreary dialogue gets dull. Side quests are a little more varied and offer some dark humour but overall, it’s too dull.

At it’s core, The Sinking City is a detective game. As you are investigating a scene, you collect clues and add them to your “Mind Palace”. From here you choose which piece of evidence coincides with what to form the narrative. Using your Minds Eye ability, you can reconstruct a crime scene in order. The final outcome is less black and white than I was expecting, giving you choices as you deliver your verdict, This “moral choice” system can mean neither you or the client may get the outcome you desire. Getting to the crime scene is a different matter. By finding clues you visit either the news agency, hospital or police station and use their archive system to mark it off against your own evidence and find a location. The complexity doesn’t end as you have to physically find the location. Locations aren’t pinned onto your map, you’ll have to find the exact street on the map yourself. This is brilliant, for the first few cases. It becomes a chore very quickly and when you realise the cases themselves have little depth, it’s a little sad. The map is too big for it’s own good and slowly jogging to each location gets boring, as you have to hop on a slow boat for about 10 seconds, to cross a flooded street. If they had sectioned off each map into chapters, more focus could have been put on the gameplay loop but as it stands it feels like it’s slowing you down as a joke.

Combat plays a fairly large role as well, due to Oakmont being infested by Eldritch monsters. Reed has a range of guns, melee weapons and explosives at his disposal to take on these foes. As first, it’s cool, you have extremely limited ammo but a single bullet kills the smaller enemies you encounter making single bullet kills rewarding. This is important as, much like Metro, bullets double as currency. Things take a dive quickly though, as bullet sponge enemies are abundant and given the low pool of health, it’ll be a few hours before you’re equipped enough to fight. When the playing field is more even, the combat is passable and the inclusion of a sanity meter adds a sense of urgency to combat. The biggest disappointment here comes with the crafting materials, well, their respawn rate. Once you clear a building of resources, simply re-entering respawns everything. You can fill up your stock in a matter of seconds, negating the tension of a limited inventory. I get the feeling Frogwares have tried to do too much here, they get close to making a competent detective game and close to make an interesting survival horror game but ultimately fail at spinning the plates.

The Sinking City looks quite nice, Oakmont is designed well and the character models are good. The game boasts a fantastic lighting system and the level of clutter around the city is perfect. What isn’t good is performance. On the Xbox One X, it felt like the game was going to fall apart as I played. Audio constantly cuts out and the massive slowdown when turning the camera almost gave me a headache. This is despite the long delays and I shudder to think how base consoles perform. There’s a lot to patch and note, this is all based on pre-release gameplay. Voice acting and the script are hit and miss but generally do a good job. Sadly the musical score and audio design was pretty poor.

View some more screenshots from The Sinking City in our gallery:

Despite all this negativity, I had a good enough time with The Sinking City. It’s clear Frogwares have put effort in, even though they clearly tried to do too much. It reminds me of Murdered: Soul Suspect, interesting premise that doesn’t quite nail the execution. It’s a stronger product overall though and if Frogwares iron out the bugs or you play on PC, The Sinking City is worth a play-through.

The Sinking City was reviewed using a digital code supplied by the publisher.