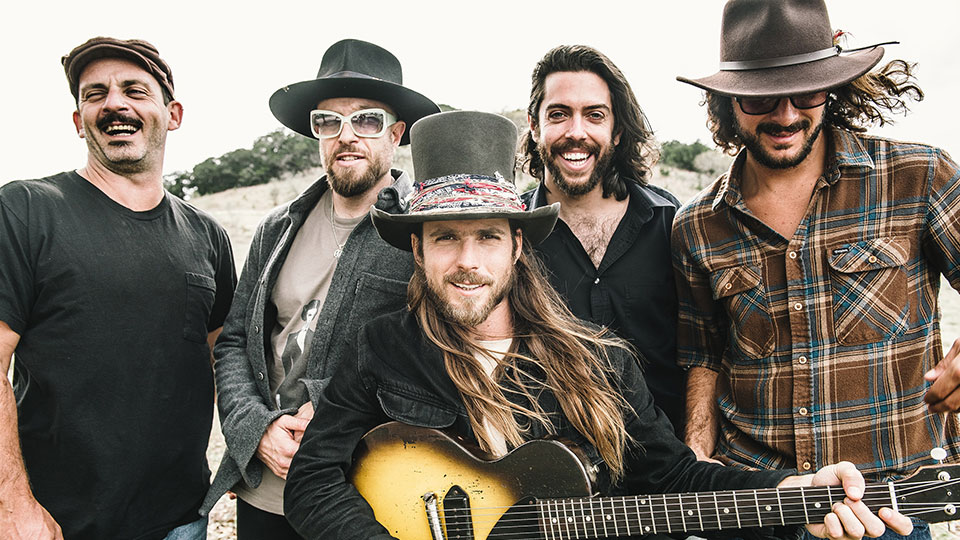 Lukas Nelson and Promise of the Real have had a huge year since they made their UK debut at C2C: Country to Country last March. The release of A Star Is Born, which sees the five-piece performing as Bradley Cooper’s band and whose soundtrack Nelson produced and wrote several songs for, catapulted them into the public consciousness, whilst their new album Turn Off The News (Build A Garden) has been winning them critical acclaim. Ahead of their set at Glastonbury today, the band played a one-off show at Shepherd’s Bush Empire last night.

The group arrived on stage to huge cheers from the crowd and opened their almost two-hour set with Something Real, from their latest album. Its heavy rock riffs gave all five band members the opportunity to show off their outstanding musicianship, particularly on the long outro where they could be seen jamming together – something they’d return to throughout the performance. Nelson’s vocals had a rawness to them which almost morphed into a yell in places and he had fantastic energy from the off, throwing his head back and bouncing around the stage, as well as showing off some impressive guitar-playing skills. The song definitely got the audience fired up and set the template for the rest of the evening.

Although the majority of the show focused on the band’s two most recent albums, there were still a few old favourites popping up throughout, such as Start To Go with its rollicking feel and quick delivery from Nelson, as well as some impressive vocal runs. They also threw in several classic rock covers, including a lively take on Crosby Stills & Nash’s Carry On which featured an a cappella bridge mixed with tropical rhythms and crunchy guitars, and Pali Gap/New Rising Sun (Hey Baby) – originally recorded by Jimi Hendrix – where Nelson played a fierce, grungy opening riff that saw him almost shaking with effort and dropping to the ground before moving into the mellow verses. It’s clear he puts everything into his performances and there’s a real intensity about him on stage that’s utterly mesmerising to watch.

One thing which struck me about the band was just how versatile they are. From the 1950s shuffle and swing of Four Letter Word, which highlighted the drawl in Nelson’s voice, to the swampy Fool Me Once and Die Alone – a song that’s frankly made for driving down a desert road or along the coast – their range of influences is absolutely incredible. They’re able to effortlessly switch between musical styles even midway through a song and I really enjoyed seeing them having fun and playing around on stage. Additionally, they’re all incredibly talented musicians and it was great to see them all getting a chance to show this off throughout the set, particularly drummer Anthony LoGerfo who added plenty of rock and roll flourishes.

It was clear that the band had come to party and they definitely embraced the rockier side of their sound throughout the show. Current single Bad Case, with its killer opening and simple frank lyrics showed off Nelson’s skill as a songwriter, whilst Save A Little Heartache balanced its bluesy feel with downbeat lyrics and the funky Find Yourself, featuring support act The Wandering Hearts, turned into a battle of the sexes audience sing-off. One particularly big moment came during Simple Life, where Nelson brought out teenage guitar prodigy Toby Lee and the two of them jammed together. I was seriously impressed with both of them and how they built the song’s laid-back sunny groove into a layered, thundering crescendo. The crowd clearly shared the same sentiment as me, clapping along throughout and roaring their approval at the end.

However, for all the fun to be had rocking out, for me many of the best moments came when the band slowed things down. Set Me Down On A Cloud combined crashing drums and distortion with a gospel-influenced chorus and emotional delivery from Nelson, whilst an acoustic version of Turn Off The News (Build A Garden) was an early highlight, with the crowd singing along and Nelson showing off the fantastic tone in his voice. Meanwhile, the shimmering Just Outside Of Austin was the most classic country moment of the night, with Nelson delivering effortless rich vocals and plenty of Glen Campbell vibes, and Forget About Georgia saw him produce some incredible drawn-out notes as well as detail-packed lyrics. It’s such a moving track and hearing the crowd sing along made it an absolutely spine-tingling moment.

The band closed their set with a stripped-back cover of Paul Simon’s classic Diamonds On The Soles Of Her Shoes. For me it really summed up their entire performance, with impassioned soulful vocals from Nelson and an electrifying solo intro which showed off his speed and skill as a guitar player before picking up into a bright and joyful rhythm with all the band members playing their part brilliantly. The crowd could be seen clapping, dancing and swaying along and as the band took their bow they burst into applause and enormous cheers.

Overall Lukas Nelson and Promise of the Real put on an absolutely brilliant show and I could have quite easily stayed to watch them for the rest of the night. Nelson’s incredible vocals were at the forefront, along with fantastic musicianship from all the band members and the sheer range that they have – everything from classic country to blues, rock and funk. They’re so entertaining to watch too and I can’t wait for them to come back to the UK. If you’re at Glastonbury today make sure you catch them as you’re in for a real treat!

In this article:Lukas Nelson & Promise of the Real