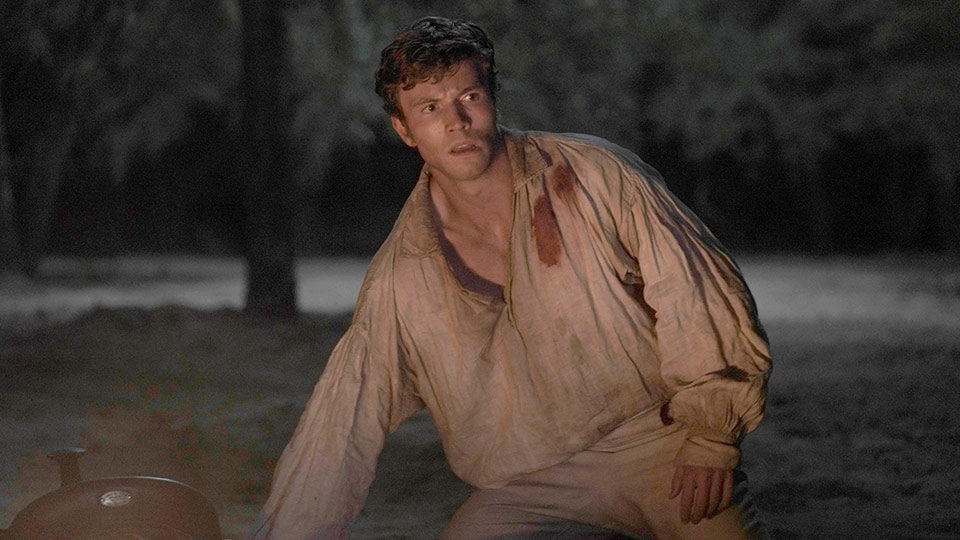 Beecham House continued tonight as viewers were treated to the second episode just 24 hours after the first.

Henrietta (Lesley Nicol) was distraught over the idea that she’d had to be bathed due to an issue with the running water at the house. As she complained with Violet (Bessie Carter) by her side, Henrietta let out a scream when she saw a scorpion making its way across the floor and insisted the staff check her bedroom for insects every hour to ensure she didn’t die from a bite.

Beecham arrived in Kannauj in search of his brother Daniel (Leo Suter) and he had a flashback to some of the atrocities he was a part of when he was a soldier. As he helplessly watched his comrades attacking Indian men and women, Beecham left the scene and in the present day he continued his journey.

Margaret (Dakota Blue Richards) was visited by General Castillon (Grégory Fitoussi) who gave her perfume as a gift. He told her he was on the hunt for her brother and asked if she was still returning to England. When Margaret said she was staying, Castillon warned her that Beecham wasn’t a good man.

At the house Henrietta was rude to the staff, giving each of them new names as she was struggling to learn their actual names. Baadal (Viveik Kalra) went along with it but the rest of the staff didn’t look very happy.

Castillon found out where Beecham was and took that as a sign that he was still working for the East India Company. He could barely contain himself as he decided to go and tell the Emperor (Roshan Seth) what was going on.

Beecham and Samuel (Marc Warren) searched around Kannauj looking for Daniel where they were told that he was recovering from sickness.

Henrietta continued to flap about being in India but she managed to pause for breath when Margaret arrived at the chapel. She questioned Margaret about her relationship with Beecham and tried to find out information about the baby’s mother. Margaret deflected and told Henrietta to speak to her son directly if she had questions about his private life.

Baadal and Chanchal (Shriya Pilgaonkar) were about to journey into town when a carriage arrived. Mool (Kulvinder Ghir) and his wife watched on as a woman climbed down from the carriage and silently made her way into the house. Was she Beecham’s MIA wife?

The woman prayed as she entered the house and was watched by Henrietta, Violet and Margaret before asking to see August. Speculation began with everyone that she must be the child’s mother.

Picking up August, the woman tried to leave the room but was told she was not allowed to take him. She told the staff she could do what she wanted and knew what was best for the baby. It didn’t take long for her to have a run in with Henrietta and she dismissed Margaret too, telling her she didn’t need an English governess.

Back in Kannauj, Beecham and Samuel tracked Daniel down to a local brothel and they found him getting intimate with a trio of women. When Beecham interrupted him, Daniel hit out not realising it was his brother. The two had a tense exchange as Daniel accused Beecham of not caring about him after he had disappeared without saying anything.

Beecham explained he had to get away from the company and told Daniel that Henrietta was in India. That was enough to get Daniel to agree to leave the brothel and return to the house with him.

Castillon told the Emperor that Beecham had been seen returning to the company with Samuel, ensuring he caused some trouble.

At the house Violet checked on Henrietta who was dosing herself with opium, upset that Beecham had married someone without telling her. Violet tried her best to calm Henrietta down so she could rest.

Beecham, Daniel and Samuel stopped travelling to rest and built a fire. Daniel was still angry at Beecham, questioning why he cares so much about him after the time that had passed. Beecham shared his concern with Samuel that Daniel would end up like their father.

As the three slept they were targeted by thieves, one of which was shot by Samuel. The next morning the three of them returned to the house and Daniel expressed his surprise that his brother could afford such a large house.

The minute Beecham arrived home, Henrietta confronted him about the woman who had turned up and he realised part way through the rant who his unexpected visitor was. As they came face-to-face Beecham insisted that he needed to speak with the woman in private.

It was revealed that the woman was Chandrika (Pallavi Sharda) and Beecham told her that by visiting the house, she had put August’s life in danger. He was angry that she hadn’t honoured their agreement, telling her there had been intruders at the house. As he asked her how she was, Chandrika admitted that she wanted to see Beecham too, which also motivated her visit.

Returning to his mother, Beecham explained that Chandrika had August’s best interests at heart but stopped short of telling her who the woman was to him. He distracted her by taking her to see Daniel, who was having his wound tended to. Henrietta was hysterical so Daniel spoke with Violet, establishing the two had a prior relationship.

Beecham then took Daniel to see August, revealing that the baby’s middle name was Daniel. That won Daniel over but Henrietta remained distressed and turned the conversation to Margaret in another attempt to cause problems.

Deciding to see Margaret, Beecham spoke to Murad (Adil Ray) about the present he was trying to get for the Empress. He then had a conversation with Margaret to find out if she had been offended when she was at his house earlier in the day. Margaret told him that Chandrika was rude to her but didn’t answer the question as to whether the woman was August’s mother.

Margaret continued to tell him that Henrietta had been rude to her, looking down on her because she had a job. She went as far as to say Henrietta made her feel very unwelcome at the house and told Beecham that unless he started being honest with her, she couldn’t take him at his word any longer.

Chanchal kept a close eye on Daniel, barely keeping her attraction to him a secret. He spotted her glances and went to speak with her. Embarrassed Chanchal tried to avoid his gaze but when he asked her to help him with the stairs, she agreed to lend a hand.

During breakfast Daniel called Henrietta’s rudeness out when he found out she was giving the staff new names. Henrietta asked how long Daniel could be on leave and told him she wished he was wearing Western clothing. As Daniel spoke of enjoying Indian women, Baadal looked uncomfortable.

Beecham spoke with Ram Lal (Amer Chadha-Patel) as he spent time with August and had a series of flashbacks to happier times. He then returned to see Margaret, who apologised for her appearance explaining that she’d been swimming in the river with Roshanara (Medha Shankar). Beecham apologised for Margaret’s experience at his house and he asked her to be a friend to his family. He also said he couldn’t speak for August’s mother as it would compromise the baby’s safety.

Margaret revealed that she was planning to return home and she asked why Beecham wanted to stay in Delhi. He pleaded with her not to leave but they were interrupted by Roshanara.

Back at the house Beecham told Samuel they needed to push on with the trade licence and revealed he was planning to get an automaton, a moving sculpture, for the Empress in a bid to impress her and get his licence.

Chandrika was singing to August and interrupted by Henrietta who tried to get her to hand the baby over so she could sing to him in English. Beecham was called to diffuse the situation as a row escalated and Henrietta demanded to know who Chandrika really was. Beecham revealed that Chandrika was August’s aunt and that he was a widower. He also emphasised that no one could know she was there.

Beecham also revealed that his whole family were to stay in Delhi so they could build a life together, stating that they had no choice.