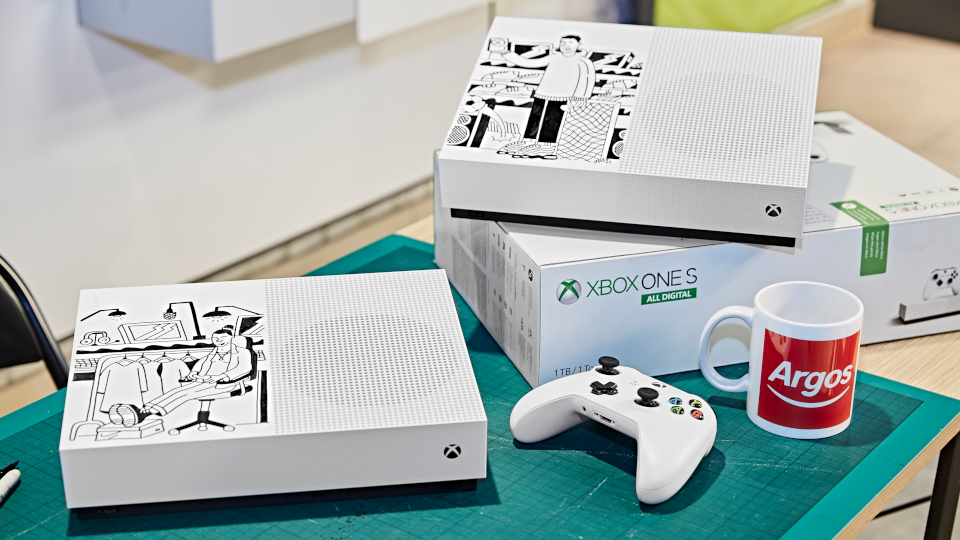 Yes, you read that correctly. It says you can bag yourself an Xbox One S All Digital console for the mere sum of £3. This is possible due to a promotion being run by the people over at Argos. The console would normally cost £199.99 so you’ll be getting a cool 98% discount should you be one of the lucky winners.

Obviously, you can’t just rock up to your local Argos and demand a console for £3, you will have to take your chances in the random draw that will be taking place shortly after the offer closes on 19th June at 23:59. Clearly, time to get entered is short so if you want to be in with a chance head over to the Argos competition page to enter.

There are 10 consoles up for grabs and winners will be invited to collect their console at London’s Old Street Argos store on Monday 24th June. Those unable to make it in person have the option of having it delivered to their home.

These aren’t just any old consoles either, oh no. They will all be customised by street artist Josh Parkin making them extra special collector’s items.

Peter Wray, Head of Gaming at Argos, said: “We wanted to share the excitement of E3 and celebrate the launch of the Xbox One S All-Digital Edition with this very special price of £3. Our collaboration with renowned illustrator Josh Parkin also means gamers can make an aesthetic feature of their console in their home.”

The Xbox One S All-Digital Edition enables gamers to build a library of digital games and offers the chance to pre-order and pre-install upcoming games, ready to play the moment they launch. With a disc-free experience eliminating the need to constantly change and store physical games, the console is the ideal choice for minimalists who want to reduce clutter.

It comes with Forza Horizon 3, Sea of Thieves and Minecraft ready to play and includes a wireless controller and one month of Xbox Live, making it the best value console in the Xbox range. For even more value you can add an Xbox Game Pass for Console membership. Over 100 high-quality console games for just £7.99 a month. With games added all the time, there’s always have something new to play.

In this article:Argos, Microsoft, Xbox One, Xbox One S All Digital