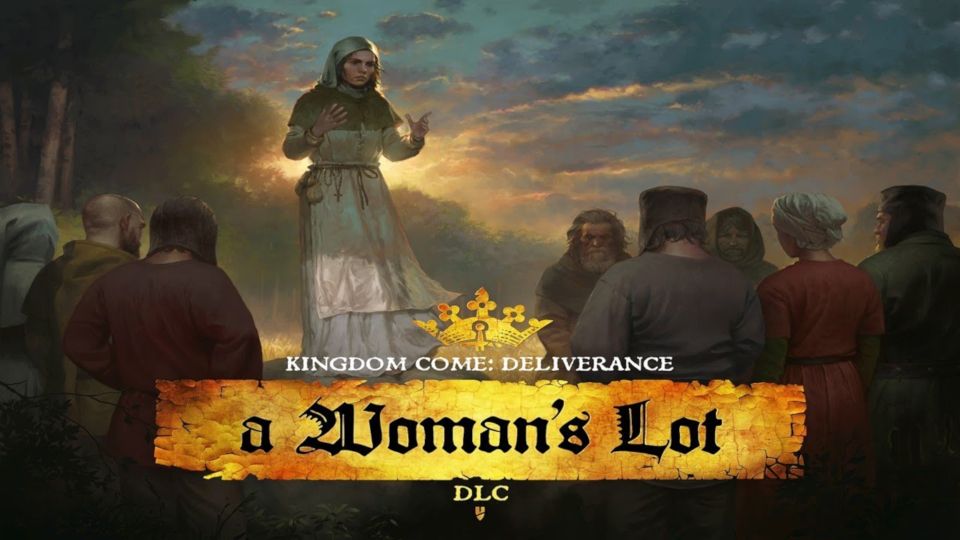 Part two of our review for the A Woman’s lot DLC for Kingdom Come: Deliverance covers the quest chain The Madonna of Sasau. If you want to know more about the Theresa questline then check out our part 1 review before reading on. You should note that before you read on this review contains story spoilers.

As with the Theresa questline, Madonna of Sasau is very much story-focused and delves into the role that religion played in the world at the time. It also really makes you question your own morality as each time you are given a choice you can either choose to help the greater good or just yourself. You play as Henry and you are helping out Johanka, a fellow Skalitz survivor. Johanka is having dreams and believes they are messages sent to her by the Virgin Mary herself. She asks Henry to help her out to see if there is anything to the dreams.

During his travels Henry finds himself taking on murderers, saving prostitutes and fleecing a gambler to teach him a lesson to name but a few activities. There is a lot of content in this questline and to explore it all fully will easily take up a full day of gaming and that’s presuming you don’t get distracted along the way.

The choices you make throughout your journey have an effect on how the story plays out and there are multiple endings. My ending turned out to be one of the worst possible outcomes but I’ll cover that later. Your choices will also affect how you feel as a player. I tried to be good in this playthrough, always giving the money I found to the needy, always standing up for who I thought were the right people and still I was met with a very upsetting ending. Next time I’m going to play as a right bastard and see what effect this may have, it definitely can’t be worse.

If you’re one for the combat of Kingdom Come then you’ll be much happier in this part of the DLC as there is plenty. In one part of the quest, you are tasked with saving a prostitute from her life of sin. You bust in on her being abused by a nobleman client who is none too happy with you. He ends up confronting you later about it backed up by two heavily armed thugs. They promptly pasted me time and time again until I decided to take a different approach.

After I chased him out of the bath house I followed him and found that he ran to a camp just outside of town. Here I easily mowed him down as he was unarmed, I’m not proud of this by the way!, and managed to take one of his guards by surprise before they even knew I was there. This just left me with one guard to deal with and as the camp was out of the town there were no pesky witnesses.

I only highlight this, as once more Kingdom Come appears to reward thinking outside of the box rather than just having players go through the motions. Granted, if I was better at combat I wouldn’t have had to resort to my shameful tactics but the fact that the choice exists at all is a credit to the guys at Warhorse.

Now on to that ending. Towards the end of the story, the Inquisition come for Johanka and imprison her. Once again, you have choices to make. You could choose to break her out of jail and go on the run or you could let the trial take place and attempt to defend her. Hell, it wouldn’t surprise me if you could even kill her yourself and have the story end that way. As I was trying to be good I chose to defend her in the trial.

Despite all my praise for her and bringing in the townsfolk to speak of her good deeds, it was all in vain. She ends up being whipped, having her tongue cut out and then dying of her wounds. I was absolutely gobsmacked by this ending and it genuinely moved me. Kingdom Come strives to be historically accurate and if this really was a punishment the Church used to dish out then shame on them. It is portrayed very graphically and is truly shocking to witness.

To sum up, The Madonna of Sasau was great to play through. As I’ve come to expect from the game, all of the character interactions are well thought out and engaging. The variety within the missions here should keep most players happy and the possibility of different endings offers lots of replay value. I only hope you make better choices than I did and keep Johanka alive.

When you put both parts of the A Woman’s Lot DLC together you have 2 new storylines to cover both of which can take many hours to complete. Both have engaging, moving storylines and really highlight how videogames can be used to tell a story rather than just putting us in a soulless sandbox.

A Woman’s Lot was reviewed using a digital code supplied by the publisher.