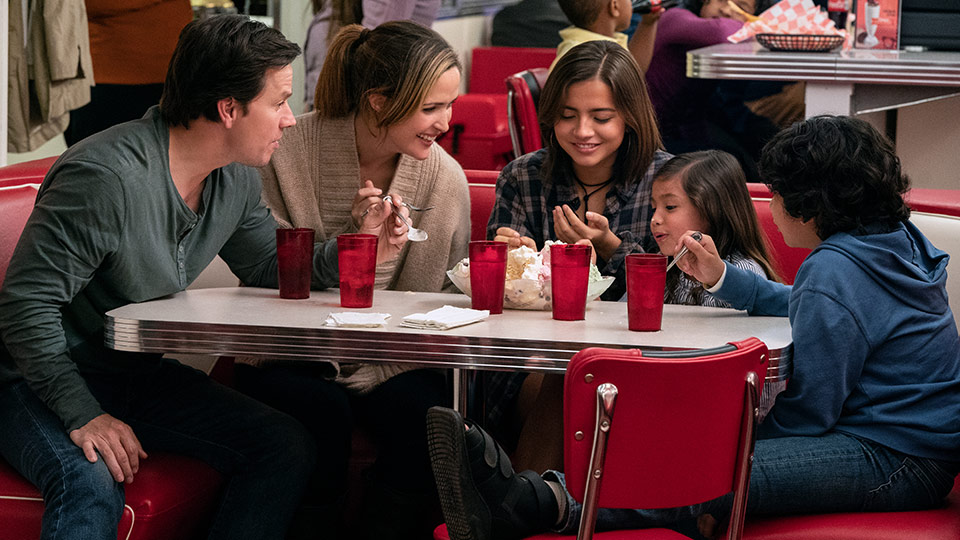 Married couple Pete (Mark Wahlberg) and Ellie (Rose Byrne) make the decision to look into fostering a child. With the help of social workers Karen (Octavia Spencer) and Sharon (Tig Notaro), they decide upon teenager Lizzy (Isabela Moner) whose mother is a drug addict serving time in jail. When Lizzy reveals that she has two younger siblings, Juan (Gustavo Quiroz) and Lita (Julianna Gamiz), Pete and Ellie impulsively agree to take all three in without realising what they’re letting themselves in for.

Instant Family is a heart-warming comedy from writer/director Sean Anders (Daddy’s Home) and being completely honest, it was a very pleasant surprise. I went into the film with fairly low expectations despite being a fan of both Wahlberg and Byrne, particularly when they do comedy, and I’m pleased to say the film was much better than I expected. While not a particularly exhaustive look at fostering and the emotional impact it has on everyone involved, Instant Family packed in way more heart than I was prepared for, plenty of laughs and it was actually pretty moving at times.

The laughs come thick and fast from the opening moments but the film really gets into second gear when Pete and Ellie attend their first group meeting at a foster care center. Clearly unprepared for the road that lies ahead, they find themselves surrounded by other people keen to foster and they get swept away. Octavia Spencer and Tig Notaro bring plenty of comic relief throughout the film as they haplessly guide Pete and Ellie through the process and its ups and downs.

As Pete and Ellie adjust to being parents to three children of varying ages, they hit plenty of roadblocks particularly with Lizzy who is desperate for her mother to get out of prison so they can be together as a family. That causes plenty of issues between her and Pete and Ellie, as Lizzy won’t allow herself to get used to her new family or open herself up. The younger two children are more open to the situation but they both cause Pete and Ellie a fair few headaches over the duration of the film.

Wahlberg and Byrne are brilliant together on screen. Both of them have done some of their best work in comedies and here they make a brilliant team. Their chemistry is evident and they really bounce off one another. Byrne is particularly hilarious when her character Ellie continually puts her foot in it during the early stages of the adoption process while Wahlberg excels at dropping fantastic one-liners and landing them perfectly. Isabela Moner is also excellent as the stroppy and misunderstood Lizzy. There are some genuinely lovely moments where she allows herself to be vulnerable with her new foster parents and they are really, really sweet.

The Blu-ray is loaded with extras. There are deleted and extended scenes, a gag reel, a feature commentary, a series of featurettes and a music video for Isabela Moner’s I’ll Stay. One of the sweetest extras is The Families Behind the Fair, which speaks to real foster families. There’s also a featurette on Sean Anders’ family who were the real-life inspiration for the film.

Instant Family is definitely worthy of your time. I got way more involved in the film than I expected I would, and I laughed a lot. I feel like the film really went under the radar here in the UK during its theatrical release but I’m confident it’ll find a new lease of life on Blu-ray, DVD and VOD. With plenty of heart, Instant Family is a surprisingly effective comedy that gives some insight into what it’s like to foster kids. If you’ve not seen it yet, you should absolutely add it to your watchlist!