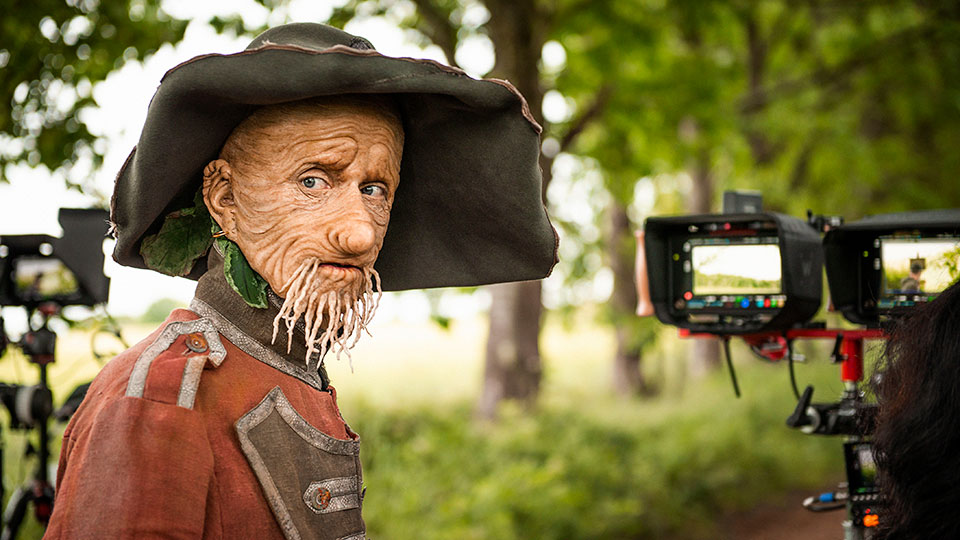 A first-look image has been released for BBC One’s upcoming Worzel Gummidge adaptation.

The modern retelling will take the form of two hour-long films, inspired by the classic books of Barbara Euphan Todd. Mackenzie Crook (The Office) writes, directs and stars as Worzel Gummidge.

The Scarecrow of Scatterbrook is the first episode. It sees two young strangers arrive in the village of Scatterbrook. It’s not long before Susan and John encounter Worzel Gummidge, the Scarecrow of Ten Acre Field. Their world is sent spinning into confusion when they realise Gummidge comes to life. The only person more shocked is Worzel, when he discovers that the children are not in fact fellow scarecrows but humans.

Their worlds should never commune but fate has conspired to create an extraordinary union. The seasons have stopped and the harvest hasn’t arrived. The rhythm of the natural world is out of kilter and this unlikely trio must try to put it right. Magic, mystery and mayhem unfurl.

The second episode, The Green Man, welcomes another mysterious arrival to Scatterbrook. The Green Man is the creator of scarecrows and keeper of scarecrow lore. He isn’t at all happy that Worzel is consorting with humans. Elsewhere, local aristocrat Lady Bloomsbury Barton is holding a fete, with a Scarecrow competition that Worzel is determined to win. What will Worzel’s most competitive rival, Soggy Bogart, and The Green Man make of it all?

Mackenzie Crook said: “I’m thrilled to be back working with the BBC and many members of the Detectorists team to bring Worzel Gummidge to a new generation of viewers and reintroduce him to old friends. Adapting Barbara Euphan Todd’s books into these two films has been a joy and I’ve completely fallen for her charming, irreverent scarecrow. Fingers crossed for a glorious English summer as we head out to Scatterbrook Farm and Worzel’s Ten Acre Field.”

Worzel Gummidge is a Leopard Pictures, Treasure Trove Productions and Lola Entertainment production for BBC One. It is Executive Produced by Kristian Smith for Leopard Pictures, Lisa Thomas for Lola Entertainment and Mackenzie Crook for Treasure Trove Productions. It is produced by Georgie Fallon and Alex Moody is the Commissioning Editor for the BBC.

Further casting announcements will be made in due course.

In this article:Mackenzie Crook, Worzel Gummidge