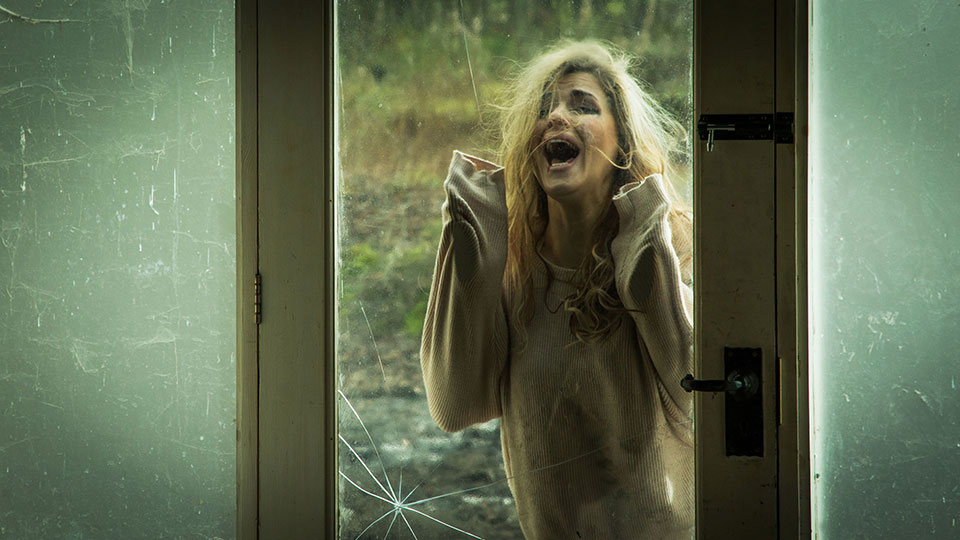 Five University friends go away for the weekend, leaving kids and marital problems behind to commemorate the life of a friend that died three years earlier. Arriving at a remote cottage near the lake where their friend Jonesy drowned, the group dynamic is immediately shifted when Paul (Dustin Demri-Burns) brings a new girlfriend (Kelly Wenham) along. In between the lagers, Frazzles and catch-ups, the group share creepy stories with the final story playing out in the cottage with everyone in danger.

This film could be described as all your favourite characters from a variety of British comedies, sketch and drama shows all go away for the weekend, and yes none of the actors are playing roles that particularly stretch them. But their familiarity is part of the reason the film can get straight into the story and doesn’t need to build in a huge backstory – you do quickly accept that this group of people are friends. They mark Miki (Kelly Wenham) as different from the group both because of her youth and the glamorous way she dresses.

Within this film there are 5 short films, so as the characters narrate their creepy story you see the action play out. Each short is directed by the actor doing the narration, which gives them all a slightly different feel and also provides a bit of depth to the character. Johnny Vegas dressed as Kiefer Sutherland à la Lost Boys for his zombie short is a highlight.

As the weekend progresses, tempers flare and during a cooling-off period Miki is attacked in the woods by a maniac. What I love in the subsequent fall out is that there are a lot of logical questions asked, no one thinks a demon is coming to get them, just that they’ve watched too many horror films. This maniac is the set-up for the final showdown of the movie which does rely on an old-fashioned horror movie trope (which they acknowledge) but the funny, realistic and all-round great performances by all make you forget that bit and just enjoy the story. A gold star for the music in the final scenes of the film, especially in the Mackenzie Crook fight scene.

This film sets up so many horror film stereotypes; remote location, suspicious death of a friend, a blonde attacked in the woods, all methods of escape and communication cut off but in a realistically scripted way the group deal with them as you think you and your friends would; with laughter, alcohol and in the end just deciding to walk to the next house!

This film is an easy watch right from the beginning – it’s got all the hallmarks of a lovely British movie, which might not sound like great praise, but it is. That uniquely British mix of swearing, sarcasm, a little bit of hope, comedy timing and characters that feel like people you would have a pint with taking centre stage. Think of it like Cabin in the Woods, meets Shaun of the Dead with the occasional interruption from Little Britain and then you’ll understand how funny, slightly scary and well made this film is.