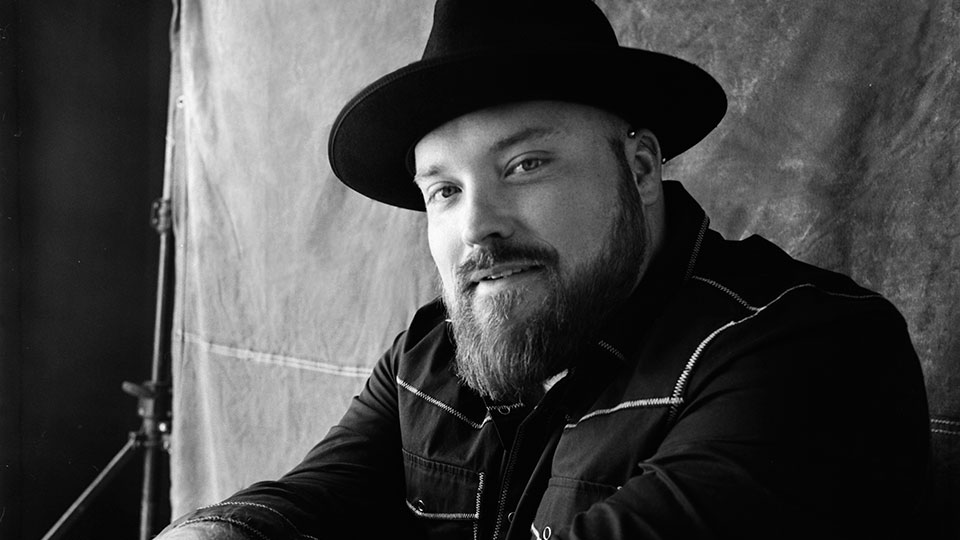 Emerging star Austin Jenckes is rapidly becoming one of the most talked-about new artists on the country scene. He’s already been named as an ‘Artist You Need To Know’ by Rolling Stone Country and performed alongside the likes of Brothers Osborne, Ashley McBryde and The Cadillac Three. Ahead of the release of his debut album If You Grew Up Like I Did this Friday, last night he made his UK debut, performing at Pizza Express Live as part of Nashville Meets London Presents.

Jenckes opened his solo acoustic set with People Crazy. Right from the off the bluesy song showed off his huge soulful voice, which had a touch of gravel in it that I really liked, as well as giving him the first opportunity of the night to hit some big notes. I was also really impressed by his guitar playing and loved the emotional, honest lyrics.

That set the template for the rest of the evening, which saw Jenckes mixing songs from his debut album with new music and a few covers, including a mashup of Patty Loveless’ You Don’t Even Know Who I Am with Fleetwood Mac’s classic Landslide. He ran the gamut from rockier numbers like We Made It and Ride Away with their soaring choruses to more stripped-back tracks such as. He also came off as incredibly warm and likeable on stage, whether he was cracking self-deprecating jokes or speaking  about his family, particularly his late father in the introduction to the downbeat, heartstring-tugging If You’d Been Around, which was an early highlight of the show.

What stood out to me throughout Jenckes’ performance was his excellent songwriting. He’s got a great ear for a turn of phrase, such as the line ‘Muscle Shoals and muscle cars’ on American Nights (previously cut by Morgan Wallen and Lee Brice), the snippets of storytelling on the stripped-back, romantic Bet You’d Look Good with its vignettes about vintage Willie Nelson T-shirts, or the vivid imagery of the subdued In My Head. For me the best example of this was Pretty Girls And Alcohol, which starts out as a wry, knowing tale of getting up to no good before taking a dark turn. Juncos great skill in creating such a lifelike, believable character and the twist is absolutely brilliant.

I was also seriously blown away by Jenckes’ vocals, which reminded me a lot of Chris Stapleton, particularly on songs like the moving, nostalgic Fat Kid, which was full of great details. That’s What He Said, a song written in part by Jenckes’ dad, was another great showcase for this, which saw him going for a massive note at the end as his lyrics built up a beautifully layered portrait of his father. There was a real raw, open quality to his performance that completely won me over and made it impossible not to warm to him immediately.

For his five-song encore, Jenckes began with a passionate, powerful rendition of Wild And Reckless which he made look completely effortless, before segueing into the rocky Head Start with its sense of youthful recklessness. He followed that with the yearning, dreamlike Somewhere Maybe Carolina and the spiritual-influenced Better By And By, before closing his set with a cover of Lynyrd Skynyrd’s Simple Man. This was the song he performed in his audition for The Voice and for me it brilliantly summed up his whole show. He showed off some seriously impressive guitar playing as well as the depth in his vocal, which were firmly at the forefront due to the simple arrangement. At the end of the song he hit an enormous note and the audience, who’d been spellbound throughout, burst into applause and cheers in response.

Overall Jenckes delivered a jam-packed set that showed off his skills as a guitar player, frank and open lyrics and incredible vocals to absolute perfection, as well as his ability to capture the mood of a song and inject it full of pure emotion. He’s a real star in the making and judging by the audience reaction I think he won over a roomful of new fans in London. His tour in September is sure to be one of the hottest tickets in town, so make sure you do whatever you can to get one – you’re in for a real treat.

See Austin live in the UK this September: