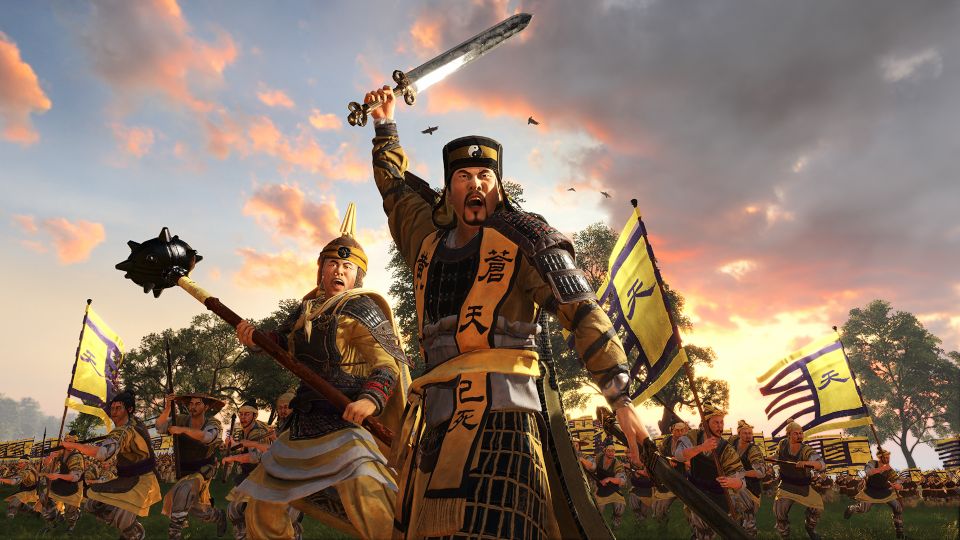 Total War: Three Kingdoms is great addition to the Total War franchise, it’s not my favourite Total War game, that honour goes to Total War: Warhammer II in my book, but it’s still a bloody good one.

Set in ancient China you take the role of one of twelve warlords in a bid to unite China under your rule. There are many options available to accomplish this task from full-on warmongering to a much-improved diplomacy system, an area that Total War has never seemed to get quite right until now. Each warlord has their own strengths and weaknesses, each offering bonuses for different play styles.

There are two different ways you can play out your campaign. You can choose Records mode which is more historically accurate and realistic or you could choose Romance mode. Romance mode turns your characters and generals into what can only be described as supermen and they can turn the tide of a battle single-handedly. For the sheer spectacle I’ve been playing Romance mode.

I decided to start as Cao Cao, in part because he has the easiest starting position and therefore is a good way to get to grips with the game. He’s also perfectly situated to take full advantage of the improved diplomacy system (more on that later).

Graphically, the game is beautiful to look at. The campaign map is very colourful and each region looks distinct, it’s also massive. The battlefields are also very well made and even though the same assets are clearly used over and over I never grew bored of looking at them. You sometimes get an option to fight your battles in the dark and these look truly stunning with lanterns floating above the battlefield.

Zooming in on the battlefield gives you a really close up view of the action, although it’s cool that you can zoom in this close it does highlight areas where the game can go wrong. It’s not uncommon to see your troops swinging away at thin air rather than at the enemy. It’s a small point and doesn’t affect the gameplay one bit.

For those how have played Total War games before you’ll feel right at home in the battles. They work in exactly the same way as previous titles and all of the quick keys you’ve got in your muscle memory will work.

Troop types are as expected with ranged, infantry, siege and cavalry all in attendance. Each type has some variation too so you can really mix up your armies. I did find the siege weapons a bit overpowered and I was able to take out much larger forces with ease simply by sitting back and letting my catapults smash my enemy to pieces. This could also be down to the AI though, which would always decide to clump its army together just begging to be pelted with flaming rocks.

An issue I have with the troops is that they all kind of blend into one and lack any individuality. Had I not spent a crazy amount of hours in Total War: Warhammer this might not have been something I would have noticed, but in comparison Three Kingdoms feels a little bland in this area.

As mentioned earlier, the diplomacy system is much improved. The number of options on display are immense and range from trade and non-aggression pacts to declaring war. There is also the introduction of vassals whereby you can make another territory your vassal in exchange for a cut of their income. You are required to help them out if they get attacked though so there is a cost. On the other hand, you could become a vassal of another warlord and utilise them to protect you while you find your feet.

There are options available to marry off family members into other factions who can act as spies or incite rebellions. You also have the option to send in your characters more directly in order to gather information or commit acts of sabotage to armies or settlements. As Cao Cao there are also options to influence how factions feel about each other and even instigate proxy wars to keep the others busy while you get on with your own aims.

There are also options to form your own coalitions with other factions. These are loose collectives that offer no guarantees but are good opportunities to find yourself a bit of breathing space as you prepare for your next conquest.

Performance-wise Three Kingdoms ran very smoothly. One of my bugbears of Total War games are the long loading times and that painful wait between turns. This seems to have been resolved in Three Kingdoms although I must point out that this is the first Total War game I’ve installed on an SSD so that could be making all the difference. If you have the option I wholeheartedly recommend installing on an SSD.

Rather than researching your way through a tech tree, Three Kingdoms has a series of reforms that you can choose from every five turns. These are split into different areas including population growth, finance and military options to name a few. They are all accessible through one of the most beautiful menus I’ve ever seen. The options are shown as branches of a tree and when each one is unlocked blossom blooms around it.

To sum up, Total War: Three Kingdoms is a fantastic game and the setting really makes it stand out from the other games in the series. The battles are as you would expect from previous titles and require a lot of strategic thinking, especially later in the game when you have more troop types to choose from. The improved diplomacy system opens up many more options and is no longer an annoying add-on to the campaign. Finally, the performance upgrades make the game a dream to play even on high / ultra settings.

You can view some more Total War: Three Kingdom screenshots in our gallery below: