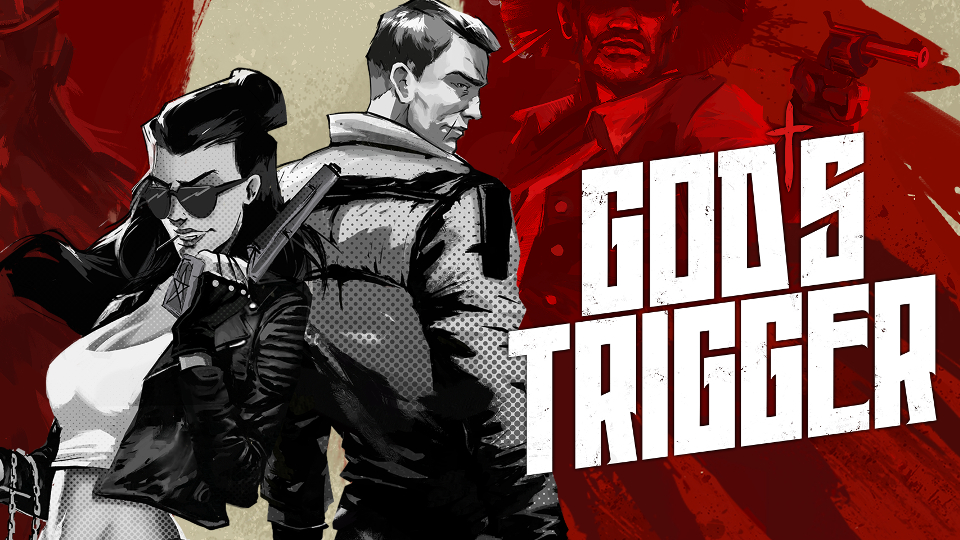 Coming down from Heaven and up from Hell, mixing in a good dose of sass and finishing off with the polish of a gritty rockabilly aesthetic is God’s Trigger. One More Level was certainly hell-bent on bringing us a reflexive, slick top down! Absolutely stunning graphics lay beautifully over the immersive levels–so clip those wings, ’cause we’re not going back to Heaven, baby.

You play as Judy the demon, who escaped from Hell and is now trapped on Earth. She’s not too mad about it though–happy enough to run with the lowly humans. With her is an equal sidekick: Harry, who like Judy made his way out of Heaven and to Earth. Together they’re after the Four Horsemen of the Apocalypse who are fixing to wreck the Earth in only the way someone named ‘Pestilence’ could. Fitted with some slick voice actors and some seriously cool character art–Harry and Judy are lighting the fire under the Horsemen’s cursed bottoms and sending them packing.

As you jump in, you can choose to play single player or opt for local co-op as both Harry and Judy simultaneously on the screen. Single player gives you the option to switch between the two though; both Harry and Judy have their own unique set of skills that are required to make your way through the game, which makes it essential to be able to fluidly switch between them both. Judy can teleport and mind control, while Harry can go invisible and avoid things like turrets or just get the upper hand on enemies for a stealth kill, amongst other things. Using everything the pair offers is going to be the only way to make it through this manic bloodfest–enemies will give no quarter, and with an instant restart….you should know what you’re getting yourself into.

The gameplay is fun, but can be punishing. I suppose in a game where you’re after the Four Horsemen of the Apocalypse, there’s not going to be too much coddling though. Blasting your way into a room is only going to work if you have lightning fast reflexes, to which I take my hat off to you! I found myself playing the ol’ game of trial and error most of the time, even with a pretty solid understanding of everything at my disposal. There’s no time limit, so gaining your composure before dropping in is largely a pretty good way to play–but if you’re a run and gunner, this is going to be a wild ride.

The local co-op was brilliant and certainly took the difficulty of having to switch between characters as a single player down a notch. Getting the jump on everyone is much easier when you can strategically plan distractions between two people too. There’s going to have to be a lot of trust put into your partner though; one misstep and you’ll both find yourself splattered all over the wall. Having a lot of patience is really going to come in handy here–checkpoints become increasingly sparse and harder to get to. You’ll have to work your way through rooms filled to the brim with baddies (with a few scattered on the way in). It’s these bigger swarms that become the challenge and just to keep you on your feet the more difficult situations are placed right before the checkpoint. See what I mean? Not impossible, but you’re going to want to have an ace sidekick there with you!

It’s impossible to not compare this brutal top down with the great Hotline Miami, but you’ll find through playing that it really is so much more. Not to take from Hotline, but God’s Trigger has so many variables in its gameplay that it’s simply not a copycat, but really takes life of its own. You’ll be able to add to your characters as time goes on in the way of different perks and tweaking their pre-existing abilities to fit whatever fight you have ahead. It’s such a solid game from top to bottom, that my only real complaint feels petty–I wish there were more voice acting! It seems to be absent from some cutscenes, where the silence is left a bit awkward. What voice acting there is though is absolutely brilliant, well done and very fitting to the characters. Judy and Harry are so robust with personality and complement a rich landscape flawlessly.

View some God’s Trigger screenshots in our gallery:

God’s Trigger is a must have if you like top downs, an absolute cracker tipping from the brim with style. The quality is there, gameplay is fun, and controls are tight. I can’t recommend it enough if you’re looking for a challenging game to take up with a friend. So let’s crack those halos for good, or tunnel up to the surface, as God’s Trigger is itching for you to pull.

God’s Trigger was reviewed using a digital code supplied by the publisher.