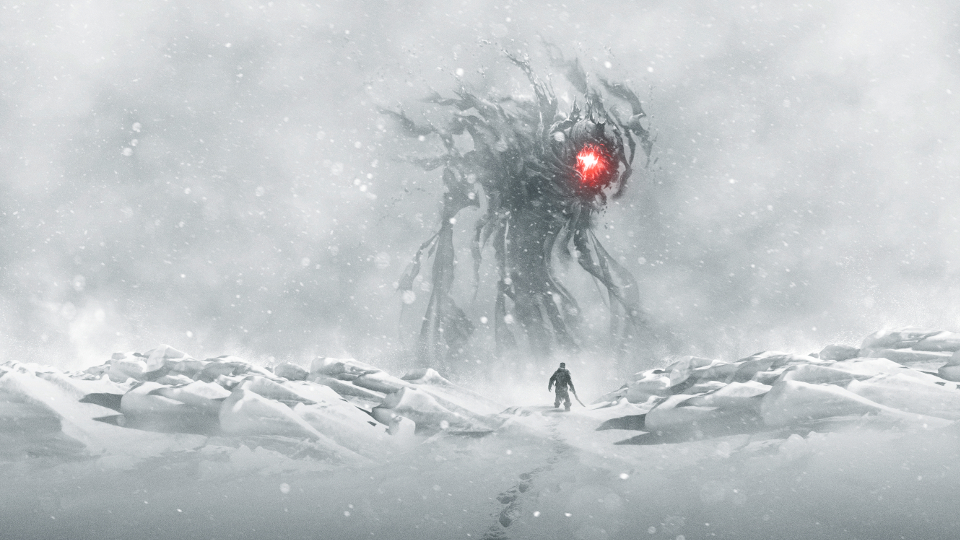 Recently, I’ve found myself spending a lot of time in snow whilst gaming. From the mountains in Red Dead Redemption 2 and Rise of the Tomb Raider, to the awesome Frostpunk. Wintery locations are something I usually dislike but I appreciate the isolation and harshness of the ecosystem. Frostpunk used its icy location perfectly and Fade to Silence mixes this with Lovecraftian influences.

Breaking from the norm of many survival games, Fade to Silence has a story. You play as Ash, who awakens in a frozen wilderness to the sound of the “Inner Voice” taunting you as the fallen leader. You awake to discover the world ravaged by ice and home to monsters known as the Eldritch. They plague the lands with red vines and are slowly killing the land. Ash learns he has the power to cleanse the vines and beat back the monsters. Accompanied by his daughter he finds an area to call home, an area to fight for humanity.

Watch the What the Frost is Fade to Silence trailer below:

In true Lovecraftian fashion, the story is told through broken and disjointed methods. While the pay-offs throughout the story aren’t great, it at least keeps you interested by drip-feeding you information at both set points and by ways you must discover yourself. The writers have certainly put the effort in here, it just doesn’t stick the landing, though the mysterious Inner Voice is always entertaining. Another method of storytelling is through the people you will recruit to your village. These people have their own morals and stories and by building trust with them, they will open up to you. These stories are often more interesting, though generic. Overall, I was happy that there was effort put into at least giving us a story and reasons to care about the people in the world. The writing of both the story and script won’t blow you away but they are fairly engaging.

Right out of the gate you are given 2 difficulty modes to choose from. I started off with the “Exploration” mode. This gentler approach is kinder with survival and combat aspects but blocks access to certain rewards and systems. It plays as a light RPG with survival and camp management systems. With your camp you have certain preset buildings that your allies can construct. You have to venture out to find these allies and they have their own strengths and weaknesses. They also need to eat and sleep and can die if you aren’t careful. Their happiness opens up quests, so their survival is paramount. Getting the materials to build your village means going out into the world and Ash relies on crafting all manner of items to help him survive. By clearing logging, mining and hunting areas your allies can venture out and get supplies for you and there are areas where the Eldritch have made their home that you must clear out. This loop of leaving to collect supplies and returning to build up your village is fun, for a while. What drags you right out of the experience is the combat.

Watch the Fade to Silence – Where Is My Mind trailer below:

It plays like a standard third person action RPG. You can lock onto an enemy and roll out of the way and use a mix of light and heavy attacks to kill them. Using ranged weapons is also a great tactic. The issue is that the combat is awful. Sluggish is not strong enough of a word here. The invincibility frames on the roll are so random you can’t get a sense of when it’s advantageous and get stun-locked or swiped to the floor with ease. You can negate this by utilising the overpowered heavy attack on most of the enemies but this can still get you destroyed. This becomes less of an issue later with higher level gear but combat is a chore earlier on. Enemies have decent variety, Rippers, Spitters and Crushers are a good mix of ranged and brute strength enemies but the Stalkers are the most frustrating enemy in the game. They move at blinding speed and can stun-lock you to death. The most interesting enemy by far is the Eclipse, a giant city floating at random above you. It flings cars, trees and everything in between at you and hunts you down once you’re in it’s gaze.

Survival mode is where the real fun is. Resources are tight and the cold really takes a toll on you. Building defences for your village becomes vital and your allies survival is vital. This is where the frustrating combat really hits you hard. Fighting simpler enemies is a fine challenge and keeps you on your toes but there are some enemies where the clunkiness kills you before you can even register what has happened. This is where Fade to Silence’s most interesting feature comes into play. When you die you can use collected items to grant special boons to Ash, these even transfer to a new game meaning death gives you power. This keeps things fresh and encourages experimentation.

View some Fade to Silence screenshots in our gallery:

On the visual front, Fade to Silence is a mixed bag. From a technical aspect, it’s not bad. Aside from some small bugs, everything works well. Artistically the game does a great job in keeping things fresh, it’s hard to make icy regions look interesting but the use of snow is great. It fills the area somewhat dynamically making them fresh and at times, unrecognisable. Voice acting is also a mixed bag but you see that the actors have put the effort in, despite the script being generic. The voice actor for the Inner Voice steals the show and is a pleasure to listen to, though both sounds effects and the score don’t really stand out.

I find myself at odds with this game. Despite some issues, there’s a lot to like here. You want to keep pushing forward and discover the story, characters and world itself and developer Black Forest Games have been very diligent in releasing fixes for the various bugs. With a little more knocked off the asking price, this is definitely a budget title worth exploring.

Fade to Silence was reviewed using a digital code supplied by the publisher.