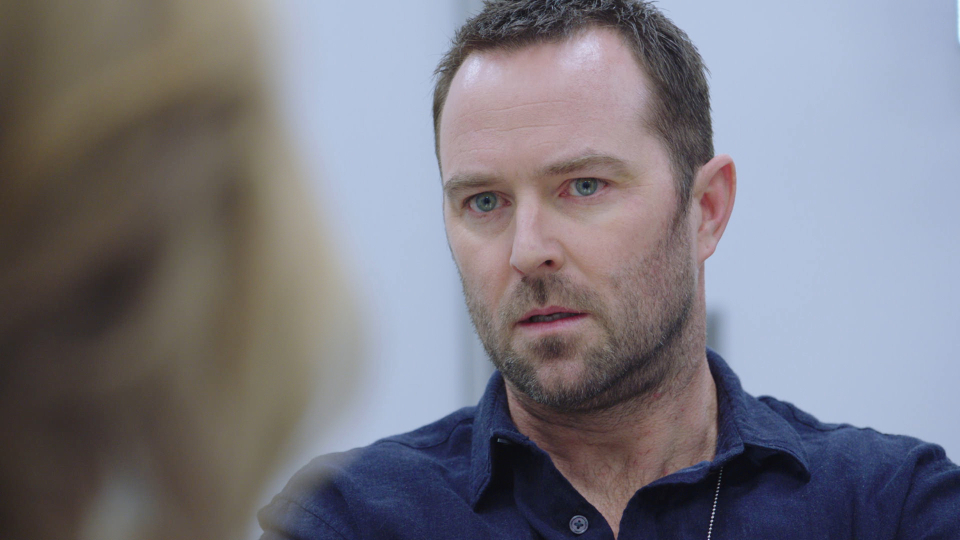 On the latest episode of Blindspot, Jane (Jaimie Alexander) and Weller (Sullivan Stapleton) continued their search for the hooded figure.

Following last episode, where Dominic Masters (Chaske Spencer) kidnapped Jane, Zapata (Audrey Esparza) has been working non-stop. Reade (Rob Brown) find’s her taking a nap in one of the conference rooms and when he woke her she grabbed him in defence.

Zapata was desperate to track down Masters and has been there all night. The rest of the team arrived and Reade gave Zapata his keys and suggested she head off and get some rest.

Patterson (Ashley Johnson) and Rich (Ennis Esmer) had hits on one of Jane’s tattoo’s that linked to TTX poisoning. A bacteria found in fish such as pufferfish that can prove fatal. Patterson had reports of 26 cases of poisoning and many of those died, however none of them had eaten seafood. They had all eaten melon though so the team rushed to the facility that grew it. Patterson was taken on the raid for her science expertise and was surprised to find her father (Bill Nye) working there as a consultant.

The FBI brought Bill and his assistant Ginny Kelling (Colby Minifie) in for questioning. Weller continued his adoration for Bill and was convinced he wasn’t involved. Rich however thought he was probably some kind of madman and took delight in winding Patterson up. They wondered if the water supply had been contaminated but it was clear. The evidence suggested that bees had been genetically modified to carry the TTX. Suspiciously, Ginny had written a paper discussing the weaponisation of bees using CRISPR.

More evidence was uncovered appearing to show Ginny signing off on the bee modification. However, she noticed the date and said she was with Bill and his wife that evening for a birthday meal. Bill was able to confirm her story. More investigation identified a guy called Nick Pomeroy who was in a lot of debt. He was planning to sell the weaponised bees for a lot of cash.

Meanwhile, Zapata didn’t get her rest because she got a call from Claudia (Britne Oldford). She was also trying to find Masters solo. The pair worked together and ended up on a path that crossed with the killer bees but Claudia wound up dead. The team worked out where the sale of the bees was happening and prepared a raid.

During the raid the bees were released but Jane trapped them inside the truck they were in. Unfortunately for Nick he ended up trapped with them and died. Rather than kill the killer bees, Bill and Ginny worked on making them safe again. The mercenaries who wanted to buy them from Nick turned up to steal the killer bees and held Bill, Ginny and Patterson hostage. Patterson and Ginny worked together and managed to use the bees against the mercenaries, killing them.

Elsewhere in the episode, Jane and Weller continued their investigation into the mysterious hoodie wearing person who was caught on CCTV entering the Sandstorm stash. They focused their efforts on the stash contents and uncovered a business card. Patterson got involved and identified the logo which pointed them to a shelter for women.

They found out that Shepherd once visited looking for someone named Jessica. They showed the security footage and got confirmation that Jessica owned a jacket like the one in the video. Rich arranged for an FBI sketch artist to create a picture of what Jessica looked like.

At the end of the episode, Zapata went back home with Reade to stay for a while. He promised to be a better friend and offered to help her find an apartment. Surely they are going to end up together again? Meanwhile, Rich turned up unannounced at Weller and Jane’s apartment. He brought the sketch with him and passed it to Jane. She immediately recognised the woman and quickly passed it over to Weller. Rich asked who it was and Weller said “It’s my mother”. It seems the twists never stop.

Can’t wait for the next episode? Read our Blindspot 4×19 Everybody Hates Kathy preview.