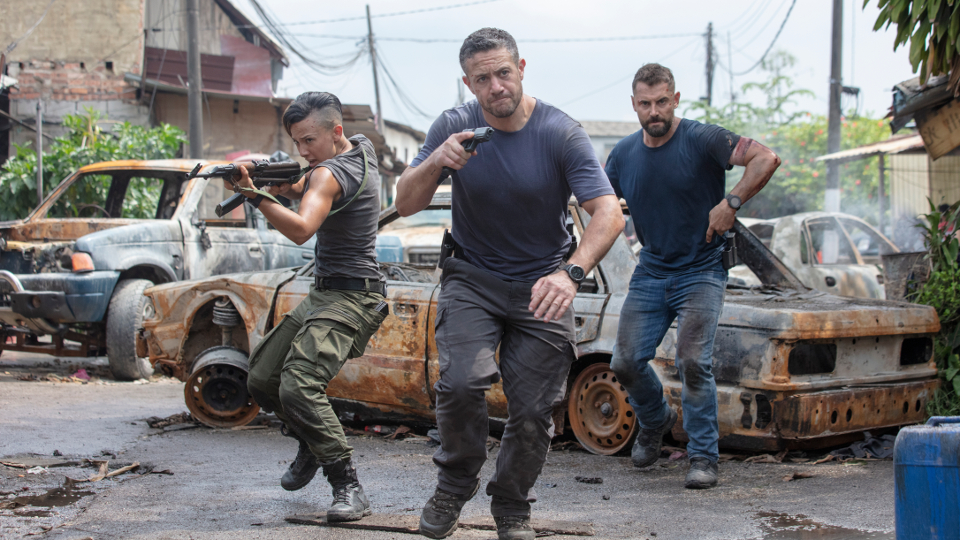 At the end of last episode, Coltrane (Jamie Bamber) found he’d been abducted by the Russians and taken to Moscow. They asked for Section 20 to help them stop Pavel .

This episode opened up four months later in Mingora, Pakistan. Mac (Warren Brown) was sat talking to a man named Fahad (Raffi Khan) about Wyatt (Dan MacPherson). He told the man that Wyatt used to say that people were grease or gravel, meaning they made your life easier or harder, and asked the man which he was. It looked like a battle had taken place as they were surrounded by bodies. Mac said he knew the man had bought a suitcase nuke from Pavel and asked where he was.

He told the man he knew the location of the nuke and he replied that Mac knew nothing. Mac said it was in a compound and that his team were on their way there while they spoke. A snippet showed Zarkova, Novin (Alin Sumarwata), Chetri (Varada Sethu) and Coltrane raiding the compound. Mac said he knew Fahad’s family were at the compound and if he gave up the information he’d ensure they were protected. It was then revealed that the man was wearing a suicide vest and was sat with the trigger in his hand. To show he was serious, Mac placed his radio on the table so the man could listen in on Section 20’s raid.

After hearing gunfire and the team making their way through the compound Fahad began to talk. He said they paid $10 million for the nuke but didn’t deal with Pavel. They dealt with a woman named Natasha Petrenko (Marama Corlett) and he showed an image of her on his phone. He slammed his fist on the table and told Mac to stop the raid. Mac took the opportunity to grab the detonator and wrestled it from Fahad. The team located the nuke, Coltrane asked if they got Pavel, Mac said no but that they had a new lead.

Meanwhile, in Florence, South Carolina. Wyatt had retired from the military and was out for a jog, he had to stop when his gunshot wound gave him pain but forced himself to keep going. He returned home to his wife Madison (Kelly B. Jones) who was about to leave for work at the hospital. Wyatt had a flight later that day to China where he had two weeks work doing a boring security job for a tech firm. After Madison left, he grabbed his laptop where it was revealed he was still investigating Pavel.

At a military safehouse in Karachi, Pakistan. Chetri briefed the team on Petrenko, the woman who brokered the sale of the nuke for Pavel. Her records had her listed as an SVR Intelligence Officer who had died 3 years earlier in a car crash. Zarkova revealed that Alpha group knew she had been working deep cover but was disavowed. She couldn’t give more details because Moscow had redacted them. Coltrane revealed that they had 10 days left to find Pavel because both Moscow and London were losing confidence in the joint operation getting the job done.

Chetri picked up Petrenko at an airport and Coltrane said as soon as they knew where she was going they would make a move. He then took Zarkova to the next room for a word to complain about the Russians redacting helpful files. It was then revealed that they had been sleeping together but had agreed not to do it again. As they prepared to do it again anyway, Chetri got another hit showing Petrenko was heading to Hong Kong. As the team prepared to move out, Novin confided in Mac that Chetri almost got shot on the last mission, she was trying to train her up as fast as possible but missed having Wyatt with them.

In Shenzhen, China. Wyatt awoke with a start in his hotel room. He’d been having a nightmare about the previous mission. He got up and got dressed then checked his laptop again for more information on a man named Caleb Montgomery (Giles Matthey) who had financial connections with Pavel. His job was working for Montgomery as security which allowed him to keep an eye on him. After a meeting, Montgomery went to work out and offered Wyatt to spar with him. Wyatt turned him down but had a vision of punching Montgomery in the face. He later called Madison and told her he thought Montgomery was an asshole who was up to something. She became worried he was there to do more than just security. When Montgomery left the building, Wyatt cut the call short to go after him.

The team arrived in Hong Kong and tracked Petrenko to a nightclub. Chetri said she could hack the security cameras to get a look inside. Coltrane sent the team to find her and ask why she was there and who she was meeting. Novin wondered if Pavel would be there but Mac thought not. Coltrane and Chetri ran comms from a van outside while the others heading inside and had a look around. Chetri discovered that the VIP area was reserved for a single client.

Mac was asked to go and check out some interference to the security feeds. A man seemed to be watching Mac and Zarkova recognised him as Artem Orlov (Alex Waldmann) a former Black Sea marine. Meanwhile, Novin located the VIP area and spotted Petrenko heading inside where she met with a man. Coltrane ordered them to wait for Mac to sort the security feeds. Novin was impatient but Zarkova said to obey Coltrane. Novin said she knew that she’d been sleeping with him.

Mac found a guy downstairs messing with the security feed and grabbed a wine bottle. He ordered him to turn around slowly and it was Wyatt! He explained he was trying to hack the CCTV to keep an eye on Montgomery, Mac explained they were tracking Petrenko. Mac explained that he had continued tracking Pavel as something of a hobby as he wanted to get him for shooting him. They realised that their targets were probably meeting each other.

Wyatt said he’d come and help but Mac was still annoyed at him leaving. Before they went back upstairs, Orlov entered with a very large Russian man who he described as a thug. He told them they should have brought more men and a fight broke out. Mac took on the big guy while Wyatt went for Orlov. Wyatt got the better of Orlov before jumping in to help Mac out.

Upstairs in the VIP suite, Petrenko asked if Montgomery had what she asked for. He said he did but had since decided he wanted $8 million instead of $5 million. After they concluded business she smashed a wine glass and jammed the stem into his leg then demanded he transfer the software she needed. Coltrane gave the order for Novin and Zarkova to move in. They overpowered Petrenko and began escorting her and Montgomery out of the club, rejoining Mac and Wyatt. Before they got outside, Pavel entered and started shooting up the club. He killed many people and then detonated a device to kill more. He then fled and Petrenko followed. An angry Coltrane demanded an update and ordered his team to leave with Montgomery before the emergency services arrived.

The team interrogated Montgomery and he said all he knew was that Petrenko was headed for some off-book Russian satellite station. Meanwhile, Orlov met back up with Pavel and Petrenko. He complained that Pavel left him but Pavel said knew he’d get out ok. Orlov warned Pavel that they were working with him not for him. They then raided Stantisya Satellite Station and held the staff hostage. Pavel asked for access to the satellite control systems and Petrenko uploaded the worm they had paid Montgomery for.Montgomery explained to the team that Pavel wanted to use the malware they bought from him to gain access to a ghost satellite called Sobaka. He didn’t know what the satellite was used for but said their plan was to crash it into Earth. Chetri got to work on interrupting the signal to the satellite. Zarkova made a call to her superiors but they wouldn’t tell her about the purpose of the satellite.

Wyatt told Mac that he was back with Madison on the condition he leave all the military stuff behind, Mac told him he was an idiot. Chetri managed to interrupt the satellite signal so Pavel said to bring it down rather than wait for it to be in position. Petrenko said it would be a few hundred kilometres off target. Chetri detected the satellite was falling and said that they had 2 hours until impact in the Northern Philippines. The team headed out to try and beat Pavel’s team to the location the satellite would crash. They left Montgomery handcuffed to a table for the authorities. Pavel executed the satellite station staff before leaving, he wasn’t happy that they put up no resistance to his raid.

Chetri determined that the satellite would crash down in the middle of an ISIL stronghold in Santa Diwa. Chetri determined that ISIL recovered an item from the satellite and took it to one of their safehouses. She also spotted Pavel and his team arriving and being surrounded by ISIL members. Coltrane was in a van with Zarkova and Chetri. He ordered Mac, Wyatt and Novin to get the package before Pavel. Wyatt commented that he’d missed his job, Mac gave him a dirty look but Novin seemed thrilled to have him back. Zarkova was upset that she wasn’t trusted to be part of the recovery team because she was Russian.

The team got eyes on the package and stealthily gained entry. Novin knocked one terrorist out and took his rifle. They took out the rest of the terrorists and secured the package. Before returning to Coltrane they decided to have a peek at what was inside. They discovered missile launch keys. Meanwhile, Pavel met with an old woman who appeared to be in charge. He said they could name the price for the package and she said it would be high. The woman told her men to fetch the package but they found the guards dead and the package gone. What followed was an incredible four-minute plus on-shot as the whole town scrambled to find 20 and the package. The section followed Novin, Mac and Wyatt as they fought for their lives to get to the extraction point with the package. It was an absolutely incredible sequence which you can watch below.

Watch the incredible one-shot sequence in the below:

During the sequence, the team came up against multiple enemies, had to constantly move, scavenge for ammunition and Wyatt even took a bullet to the arm which Novin patched up. As they were about to get overwhelmed Coltrane laid down covering fire from a balcony to allow the team to be driven to safety by Zarkova.

They had to leave Coltrane behind and he said he’d make his way to them on foot. As he prepared to leave he was struck by Orlov and captured by Pavel.