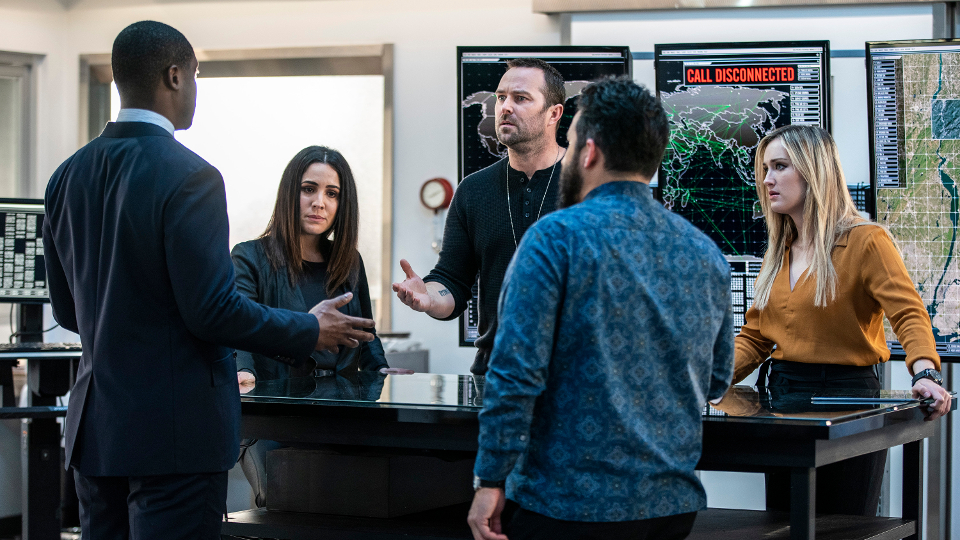 On the latest episode of Blindspot, the team faced a race against the clock to save Jane (Jaimie Alexander).

On the last episode Jane was abducted by Dominic Masters (Chaske Spencer) after the team captured Madeline (Mary Elizabeth Mastrantonio).

The episode began with the team frantically searching for clues about what happened to Jane. Rich (Ennis Esmer) scoured CCTV from the hospital and found footage of Masters wheeling out a hospital bed. It looked like the bed has someone lay on it hid under a sheet, Rich presumed it was Jane.

Patterson (Ashley Johnson) pulled a photo of Masters from Zapata’s (Audrey Esparza) files to confirm it was him. Meanwhile Weller (Sullivan Stapleton) was interrogating Madeline and had completely lost his temper because she was just playing dumb. Weller promised he’d make sure she rotted in prison and she request to be interviewed by a different agent, suggesting Zapata.

More investigation revealed that Masters stole an ambulance and then switched to a car. Madeline refused to play ball until her lawyer Richard Shirley (Raoul Bhaneja) turned up and when he did he was an absolute nightmare. He was happy to cover for Madeline and picked holes in everything the FBI said. Despite them having video of Masters they didn’t have any concrete proof that it was him, or that it was Jane under the sheet.

Meanwhile, Jane discovered she was in rather a lot of trouble. She was in a coffin that was buried underground. Inside the coffin she discovered she had a flashlight and a mobile phone, but the outgoing calls were disabled. Jane tried to punch her way out of the coffin, but the more she tried, the more dirt started to fall in so she gave up on that idea.

Masters called the FBI to speak to Reade (Rob Brown). He did so using a voice scrambler and encrypted VPN so they didn’t know it was him or where he was calling from. He offered to release Jane once they put Madeline on a plane and she was away safely. He also suggested they hurry because Jane didn’t have a lot of time. The FBI requested proof of life and he patched Jane into the call. She managed to tell them she was buried but Masters cut the call off. The burner phone that Jane had pinged off a single cell tower giving the team a rough location but too much ground to cover. Patterson did some rough math and calculated that Jane likely had just 39 minutes of air left to breathe.

Weller was starting to lose it and demanded that Reade put Madeline on a plane to save Jane. Reade however knew the Department of Justice wouldn’t agree to it. Madeline said she remembered something that might help and the team placed a wire in a conference room. Madeline’s lawyer had a signal jammer though to stop them recording her. Instead of helping, Madeline requested to call her sons to let them know she was ok.

Weller decided he was no use in the office so headed out into the field to try and find Jane himself. Rich and Patterson worked out a way to call Jane and she told them about the soil that had come through. They asked her to describe it as much as possible and Rich even had her taste it. The information let them narrow down the search area to the south of a mine. Another call she told them about a bug that she thought bit her but she’d squashed it, before she could give many details the phone battery died.

After losing if for a short time, Jane regained her composure and began to think. She dismantled the flashlight and took a wire out of her bra. Combining the items allowed her to put some charge back into her phone. Meanwhile, Rich was able to identify the bug she had killed which really helped them target the search.

Zapata finally got Reade to let her go in to talk with Madeline. Zapata obviously knows everything about her and knew that putting pressure on her family might be a line of attack. Zapata spoke of the time Madeline told her how she poisoned her husband. She said Reade was going after a warrant to have his body exhumed to test for the poison she said she used. She also had dirt on Madeline’s youngest son driving under the influence of drugs and knew that she covered it up. It was enough for Madeline to point them in the direction of a hunting cabin that Masters used.

Weller arrived at the cabin but Masters wasn’t there. Weller found a recently made hot drink and soil on the floor. They presumed Masters was tipped off by Shirley. Weller pressured Reade again and he agreed to put Madeline on a plane in the hope she’d help them find Jane or that Masters would honour the deal he proposed.

Patterson and Rich meanwhile used the mobile phones of the FBI agents searching for Jane, with the battery she had managed to recharge. They had the phones ping hers which allowed them to triangulate a location. Weller arrived just as she began to pass out and frantically dug the soil away covering the coffin. He pulled her out and gave chest compressions. It was a worrying time but he was able to save her.

While getting Madeline ready for transfer, Zapata spoke to her. When the news came in of Jane being rescued they arrested Madeline again. Reade spoke to Zapata and she told him that Keaton (Chad Donella) was off the hook. She also expressed her wish to return to the FBI and Reade agreed.

At the end of the episode, Shirley went to see Masters. He said Madeline was pissed but gave him a phone that had all the data he would need to proceed with Madeline’s mysterious Helios operation. It involved something to do with attacking the eastern seaboard and I’m sure we’ll be hearing more about it very soon.

Can’t wait for the next episode? Read our Blindspot 4×18 Ohana preview.