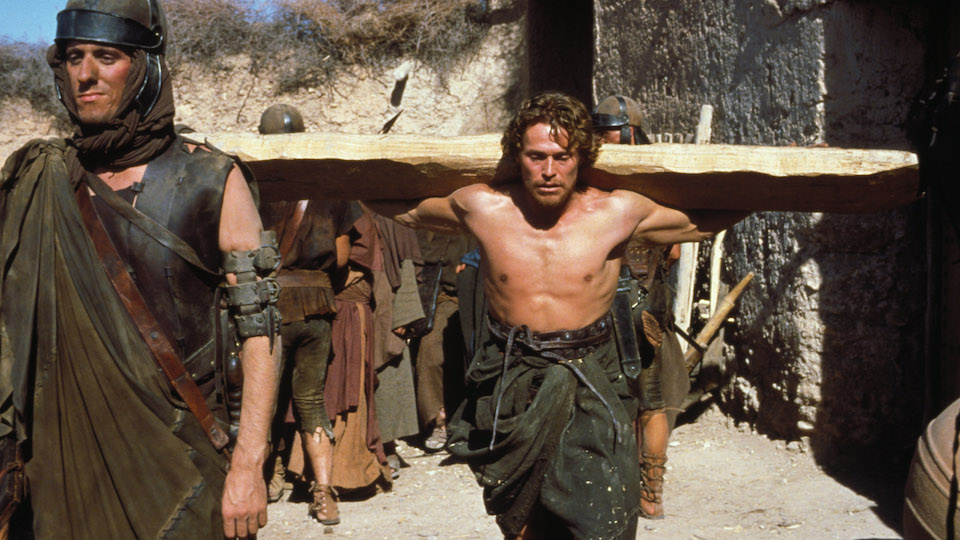 Martin Scorsese’s most provocative film, The Last Temptation of Christ arrives on Blu-ray this week courtesy of the Criterion Collection. Based on the 1955 novel by Nikos Kazantzakis, the film attracted enormous controversy on its release for depicting Christ as an actual man, who in his moment of death is tempted to come down off the cross, and live a normal life with a wife and children.

For daring to imagine an alternate version of Jesus’ story, departing from the narratives of the Gospels, Scorsese’s film was decried as blasphemous, and met with protests and boycotts all over the world. In the most extreme case, a cinema in Paris was set on fire, injuring many people who were watching the film.

The film sees Jesus (Willem Dafoe) depicted as an ordinary man conflicted by a profound spiritual torment. His desire for a normal life, but knowing that God has a plan for him, has made him hate himself. He physically punishes himself, and even builds crucifixion crosses for the Romans, making him a hate figure among the Jewish Zealots.

Shot on location in Morocco, the film has a sandy and realistic aesthetic, far from the grand Hollywood studio Biblical epics of the past. The violence and barbarity of Roman-occupied Judea mirroring the internal anguish of Christ, who in one of the films few fantastical flourishes rips out his own heart in front of his disciples.

For most of the film however, Scorsese and screenwriter Paul Schrader play the material with a very straight bat. There are none of the stylistic trappings we might expect from a Scorsese picture, really until the very end. Though this may be a symptom of the hurried shooting schedule, which resulted in them having to improvise and plan scenes on the set. There are some startling images in this film, but it is by no means a visual feast.

Willem Dafoe is sensational, delivering a complex and nuanced performance in what is surely one of his most challenging roles. However, there are some distracting elements elsewhere in the cast. No matter how good Harvey Keitel is as Judas – and he is very good in this beautifully judged portrayal – it is hard to get past such an unusual casting choice. Likewise, everyone (apart from Harry Dean Stanton) speaking in their native accents takes a while to get used to. Then there’s Bowie rocking up as Pontius Pilate, and under-acting to say the least.

The controversy surrounding the final scenes is also grossly overblown, and comes from a complete misunderstanding of the film’s central conceit. It literally opens with words on the screen saying, “this film is not based on the Gospels, but on the fictional exploration of the eternal spiritual conflict.” And the film achieves that, in a beautiful and deeply respectful way.

The Last Temptation of Christ is an epic film, extremely long, and a challenging watch, but an ultimately rewarding experience. Peter Gabriel’s score is sensational, and the three central performances from Dafoe, Keitel, and Barbara Hershey as Mary Magdalene are excellent.

The film could easily be considered as the key text in Scorsese’s career. The central well of violence, guilt, despair, and spiritually conflicted men, from which all his other films have poured into and sprung forth. Nearly 30-years later Scorsese would finish what he started here, with his masterpiece of faith, Silence.

The HD picture transfer for this release is decent, but those hoping for a crisp 4K image will be sorely disappointed. In all honestly, by Criterion standards it’s a fairly underwhelming release, with only a few bonus features. The best thing on the disc is an audio commentary recorded in 1997, with Scorsese, Dafoe, and screenwriters Paul Schrader and Jay Cocks.

There is a gallery of costume design sketches. There’s also a selection of production and publicity stills by photographer Mario Tursi, as well as some images drawn by Scorsese whilst he was prepping the film.

There’s a 15-minute behind-the-scenes featurette from the location shoot in Morocco. It was personally shot by Scorsese on a video camera, and the excerpts presented on the disc are from his original VHS video master. Finally on the disc is an interview with composer Peter Gabriel from 1996.

‘Stardust’: watch the trailer for the David Bowie biopic