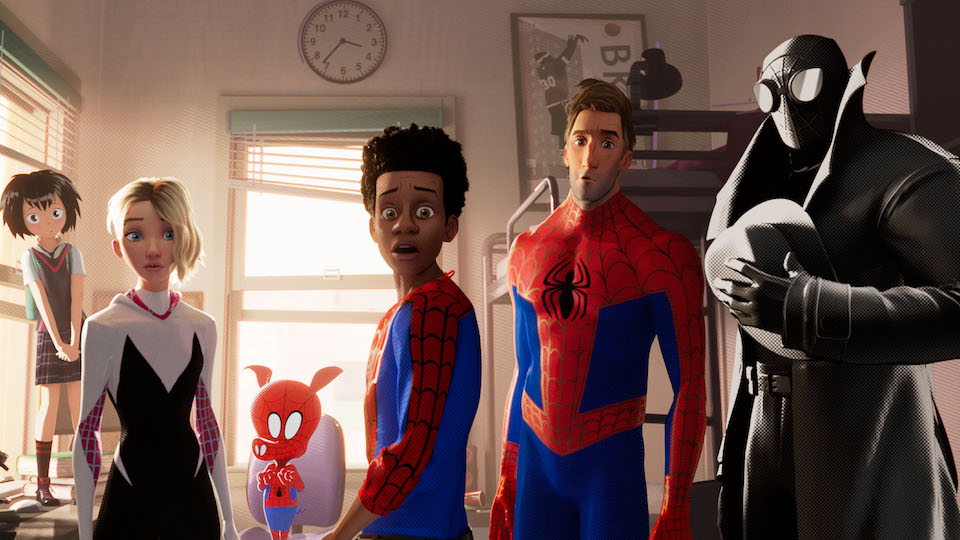 Have you ever missed a film during its theatrical run, and had to listen to damn near everyone you know tell you repeatedly, in almost evangelical terms, that it was one of the best films of the year? I’ll be honest with you, I didn’t think it could possibly live up to the hype, but Spider-Man: Into the Spider-Verse is the real deal. This film blew my spider-socks off.

An incredible blend of cutting-edge 3D CGI with beautiful hand drawn animation, the film has a visual style unlike anything you have ever seen. The filmmakers (co-directors Bob Persichetti, Peter Ramsey, and Rodney Rothman, alongside producers Phil Lord and Chris Miller) have created a superhero movie that genuinely feels like walking into the frames of a comic book. It’s so innovative and fresh that for the first few minutes your eyes almost have to adjust to this new experience. It’s kind of like watching something in 3D but without the glasses. But then you catch up, and the textures and styles and different frame rates become this all-encompassing visual delight.

The visual complexity is matched by the storytelling, taking full advantage of the medium. There are things that animation can do that live action can’t, and Spider-Man: Into the Spider-Verse pushes this to the limit. We’ve all seen the Peter Parker storyline so many times now, this film wisely chooses to focus on Miles Morales (brilliantly voiced by Shameik Moore). Miles lives in the same New York as Peter, and when he is bitten by a radioactive spider, he develops Spidey powers of his own.

Trying to track down how this happened to him, Miles discovers a lab where Kingpin aka Wilson Fisk (Liev Schreiber) has built a “super collider” particle accelerator. He is planning to use it to open a rift in reality and access parallel universes where his wife and son are still alive. As far as motives go for super-villainy, this is some heavyweight emotional material right here.

But in the process of trying to stop Fisk, Spider-Man is thrust into the portal created by the super collider. Next thing you know, Spidey-folk from multiple dimensions are in Miles’s world. We get Peter B. Parker (Jake Johnson) a version of Peter in his late 30s for whom being a hero has really taken its toll. There’s Spider-Woman aka Gwen Stacy (Hailee Steinfeld), Spider-Man Noir (Nic Cage), Peni Parker (Kimiko Glenn) from the future, and when things can’t get any weirder, enter the brilliant Peter Porker aka Spider-Ham (John Mulaney), declaring “it CAN get weirder!”

Each of these characters is afforded their own distinct visual style within the already stunningly stylised world of Miles’s New York. There is so much going on textually and visually, it should be a tonal car crash, but it’s not. It’s utterly bonkers, but in the most wonderful, psychedelic comic-book way imaginable. The filmmakers balance everything that’s going on with brilliant wit, beautiful pacing, and more meta-textual jokes than you can possibly keep up with.

You might have gotten a spidey-sense of where I’m going with this review. Yes, you’re right, I absolutely loved this film. For me it is without a doubt the best Spider-Man movie we’ve ever seen. One of the most interesting and fresh superhero origin stories of recent times, Into the Spider-Verse is exciting, scary, emotional, and frequently hilarious. It’s everything a comic-book movie should be and more.

And if all that wasn’t enough, the Blu-ray release comes bursting with fabulous bonus content. There’s a filmmaker commentary with Phil Lord, Chris Miller, Bob Persichetti, Peter Ramsey, Rodney Rothman which is a lot of fun. You also have the option to watch the film in Alternate Universe Mode, which allows you to discover the film again with alternative scenes, unfinished scenes, different plotlines, and even different characters. Very cool.

There’s a hilarious short Spider-Ham feature, Caught in a Ham which is insanely meta and an absolute blast. John Mulaney’s voice work as Peter Porker is brilliant. We are Spider-Man is a short featurette, with interviews with cast members Shameik Moore, Hailee Steinfeld, and Mahershala Ali, as well as the filmmakers.

Spider-Verse: A New Dimension is a short piece about the cutting-edge animation used to bring this film to life. They discuss the mixture of 2D hand-drawn imagery on top of state-of-the-art 3D CGI, to give it the texture and depth and spirit of a comic book. They also address the use of frame pausing to give it an intentional graphic novel feel.

The Ultimate Comics Cast is a cool piece about the casting of the movie, and includes interviews with the main cast and filmmakers, and also has footage of them in the recording booth.

Designing Cinematic Comic Book Characters: Heroes & Hams goes into the process of how they developed the stunning visual style of the film, and how they used different animation techniques for each of the characters. This is followed up with Designing Cinematic Comic Book Characters Scoundrels and Scorpions, focusing on the film’s rogue gallery of villains.

There’s a very moving tribute to Stan Lee and Steve Ditko, the spectacular Spider-Creators, celebrating the amazing legacy of these two pioneering artists. Next up is The Spider-Verse Super Fan Easter Egg Challenge, which looks at a few of the multitude of hidden references within the film. Finally, there are a couple of music videos, and some previews of other films which quite frankly aren’t anywhere near as good as this.

Oh, and the post credit sting is one for the ages.