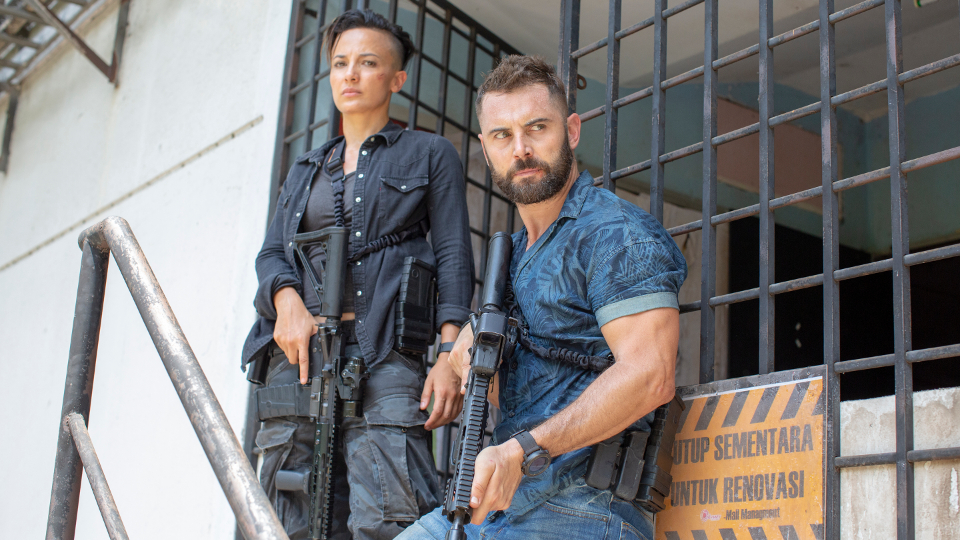 The eighth episode of Strike Back: Silent War (season 7) saw Section 20 trying to stop a terrorist detonating a nuke in a shopping mall.

At the end of last episode, Chetri (Varada Sethu) went after terrorist Hassan (Faizal Hussein) but was grabbed from behind as she was preparing to try and shoot him.

This episode opened up with Coltrane (Jamie Bamber), handcuffed to a table, in some kind of interrogation room. He wasn’t even sure where he was himself as he’d been drugged and brought there while unconscious. He presumed it was due to taking Section 20 off book. He was interviewed about recent events by a man (Richard Dillane) who appeared to be British. The episode jumped between events in Indonesia and Coltrane’s interrogation.

48 hours earlier, in Indonesia, we joined Novin (Alin Sumarwata) and Wyatt (Dan MacPherson) as they broke into the Odyssey Future Mall in Jakarta. They made their way through to find Hassan trying to arm the suitcase nuke but it wasn’t working. Novin and Wyatt revealed themselves but before they or Hassan and his men could act they came under attack from Colonel Aldo (Naeim Ghalili) and his rogue soldiers who were attempting a coup. As Aldo’s men started shooting, Novin grabbed Hassan and led him away while Wyatt did the same with the suitcase nuke. They returned fire and made it into a lift to escape to a different floor.

Nearby, Pavel (Alec Newman) and Zarkova (Yasemin Allen) met with Aldo to find out if they had located Hassan and the bomb. They monitored events inside the shopping mall and saw that Novin and Wyatt had Hassan on the fourth floor. They guided their men towards them to try and take them out.

Novin and Wyatt tried to stay one step ahead of the attackers but were eventually tracked down. They tried to stay hidden but Hassan was clumsy and knocked some stuff over, revealing their position. As Novin and Wyatt opened fire, Hassan ran off on his own. Wyatt gave Novin the nuke and grabbed a baseball bat to take out another attacker. In the exchanges she’d been nicked by shrapnel so Wyatt patched her up. She kept the nuke and then they split up.

Novin took out more attackers but then was faced with Zarkova. Novin grabbed a fire hose and leapt off the fifth floor. She used the hose to break her fall and even managed to shoot another attacker on the way down. She made her way to the parking garage and tried to hotwire a car but it wouldn’t start. Before she got away, Zarkova tracked her down. They spoke to each other in between shooting which eventually turned into hand to hand combat where they were evenly matched. After grabbing their pistols, Zarkova ended it by giving up.

Meanwhile, Wyatt tracked down Hassan hiding in a bowling alley in the mall. He caught up with him and took out several more attackers. One of them was skilled in close quarters combat and he and Mac fought. He came at Mac with a claw hammer and managed to disarm him then begun smacking Mac around. Never one to give up, Mac kept attacking him back and eventually got the upper hand thanks to a bowling ball. He ended up breaking the attacker’s neck before finally getting Hassan back who was then shot by Aldo.

Aldo held Wyatt at gunpont but Wyatt kept him distracted. While talking he managed to get hold of a gun in the back of his pants but by then he’d managed to talk Aldo down.

Back with Coltrane, he gave details of what he and Mac (Warren Brown) had been up to. They had gone to see and protect the Indonesian military commander General Dewanto (Alfred Nicdao) at his home and found him there with his assistant Sophia (Ky Discala). They came under attack by Aldo’s men and had to fight them off but Dewanto took a bullet. Coltrane and Mac gave medical assistance with the help of Sophia.

Before the next wave, as this is Strike Back, Mac and Sophia flirted and then had sex. It turned out it was a distraction and after they finished, Sophia used a stun gun on Mac. She then went after Dewanto but was faced with Coltrane. She asked him to step aside but Mac appeared, disarmed her and then shot her. Before she died she warned that Pavel was coming.

As they made to leave, Pavel starting firing from range with a sniper rifle. Coltrane upturned a table as cover but Dewanto still ended up taking another bullet. Mac ran out after Pavel but when he got to his position he found that he had fled.

Elsewhere, Chetri awoke to find herself tied up on the floor of an unknown building. She managed to shuffle along the floor to knock a coffee jar off a fridge. It smashed and she grabbed some of the glass to try and cut her restraints which resulted in her also badly cutting her hands.

Chetri eventually got free and tried to escape. The door had a digital security panel on it so she began hunting for some tools. She found a screwdriver and was able to bypass the lock. As she went to leave the building she saw Pavel coming back and realised she was in a Russian safehouse.

Pavel wanted Chetri to repair the remote detonator for the nuke. At first she refused to help but he said no one would know what she’d done and that he’d let her go. She made some progress taking it apart but then decided to refuse again. He pulled a knife on her but then realised what the issue was and repaired it himself. She grabbed his knife and tried to stab him but he disarmed her and gave her a beating. Then he armed the device.

Back with Novin and Zarkova, the suitcase nuke began beeping and they had 90 seconds to disarm it. They tried to figure how how to do so without setting off the anti-tamper mechanism. Wyatt turned up and also joined in. With 20 seconds left they decided the best idea would be to just shoot it and hope it didn’t go off. Novin took the shot and the countdown stopped. They let Zarkova go and went outside to find Coltrane and Mac arriving.

Zarkova went back to the safehouse to free Chetri and found her badly beaten. Pavel called to speak to Zarkova and she tried to talk him down but he refused. He was still hellbent on finishing his mission. She said things could go back to the way they were and he told her again that his name isn’t Pavel.

The episode ended back at the interrogation. Coltrane noticed something odd about the way the man spoke and deduced that he was a Russian who had learnt English. He broke free from the table and used the bar he’d been cuffed to to knock the man to the ground. He then took out a guard who entered and grabbed a gun. Outside the room he found himself surrounded and Zarkova appeared. The Russians had decided they needed to hear Coltrane’s side of things to corroborate Zarkova’s story, and they wanted the help of Section 20 to stop Pavel. They then revealed that Coltrane was actually in Moscow!

Can’t wait for the next episode? Read our Strike Back: Silent War episode 9 preview.