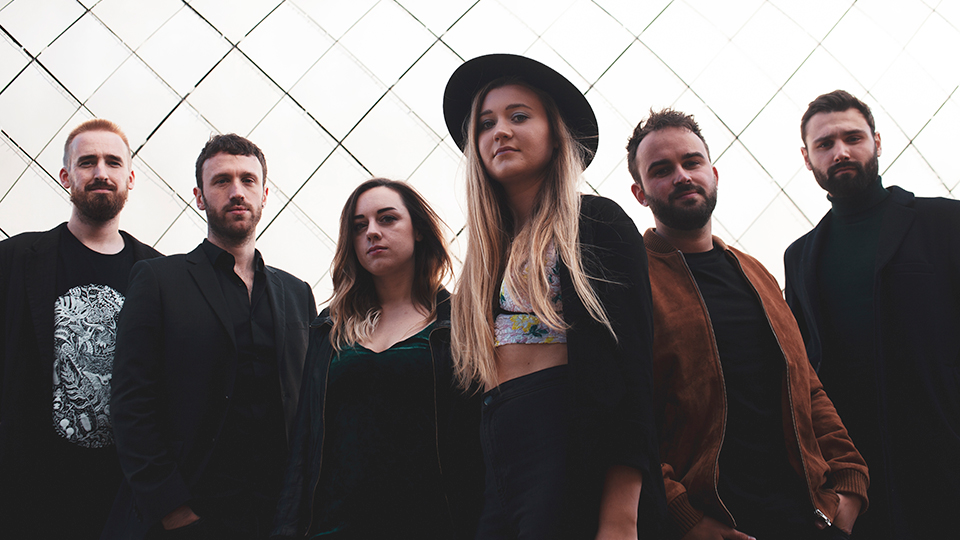 Morganway was founded by twin brothers Callum and Kieran Morgan after they found their style didn’t quite fit other bands they were playing in. Along with bandmates SJ Mortimer, Nicole Terry, Matthew Brocklehurst and Ed Bullinger, they first came to attention in 2017 after being championed by Bob Harris. Since then they’ve performed at festivals including C2C and Buckle and Boots, supported The Shires and been nominated for a British Country Music Association Award. Their debut album is due for release later this year, and last night they performed at 299 The Venue as part of Discovery2’s Youth Music #GiveAGigWeek showcase.

Arriving on stage shortly after 7.30, the band opened their set with Devil’s Canyon. Right from the off the song showcased their mix of influences, with Nicole’s fiddle playing adding a Celtic folk touch to the intro before the rest of the band launched into the rocky melody. I was particularly impressed with SJ’s vocals, which started off smoky and husky then launched into a seriously powerful belt, as well as her harmonies with bassist Callum. They followed that with the twangy, driving My Love Ain’t Gonna Save You, which featured bluesy guitar from Kieran and a capella finish that showcased SJ’s ability to hit some huge notes.

Throughout the set one thing which came through strongly was the band’s incredible musicianship. I particularly liked that everyone got a chance to showcase their skills, including keyboardist Matthew and fiddle player Nicole – the latter particularly on the ‘rowdy’ song Let It Go, which put me in mind of Fleetwood Mac’s classic The Chain. They also did a great job at keeping the energy up, despite the early time slot, encouraging the crowd to come closer and clap along (not that they needed it based on the number people I saw singing and dancing in the audience!).

For me the standout moment of the set was recent single Frozen In Our Time. It’s a bit of a departure from some of their other songs, with a stripped-back, shimmering intro (enhanced by the lighting effects) that moves into a much darker, atmospheric sound with vivid imagery. I loved that SJ got the chance to show off her incredible vocal range – she started off with a rich tone before turning sweet and breathy on the high notes, then dropping into a gravelly, edgy sound – and Kieran’s guitar solo was great too. It’s definitely a song that stays with you and something I’d be interested to hear them explore further.

After playing the lively, rattling London Life – arguably their most ‘country’ song – the band closed their performance with new single Hurricane. I felt it summed up everything great about their show, with soulful vocals from SJ, a funky guitar lick, stomping drums and some great classic rock and folk touches. The song built to a powerful crescendo with some impressive vocal runs from SJ and as it ended the audience roared their approval, bursting into cheers and applause.

This is the second time I’ve seen Morganway and I’ve always come away feeling incredibly impressed by their skill as musicians – particularly Nicole – and performers. They’ve got a great ability to get a crowd going and their enthusiasm is infectious, particularly when coupled with their unique blend of country, blues, classic rock and folk and SJ’s incredible vocals. I’m really excited to see and hear what they do next and would definitely recommend seeing them live if you can.

Advertisement. Scroll to continue reading.
In this article:Morganway