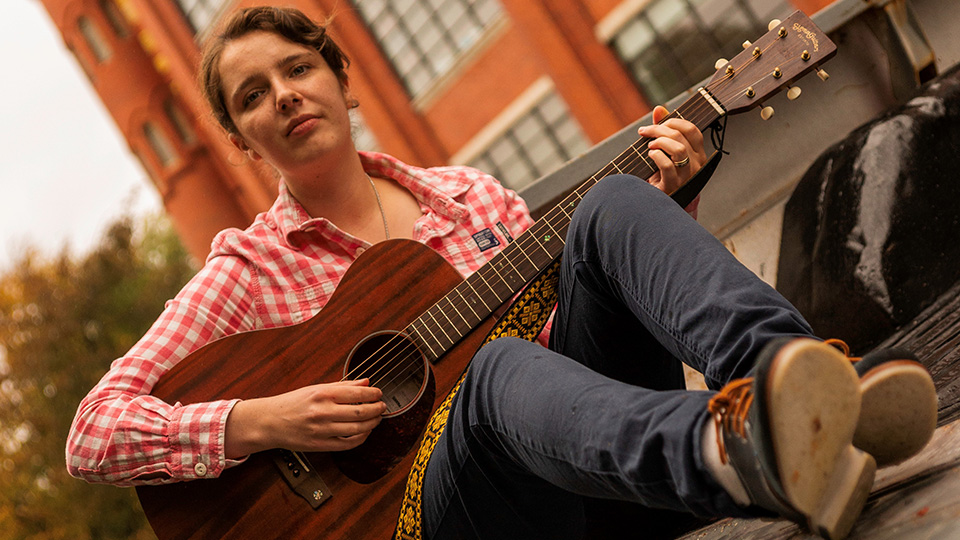 Scottish singer-songwriter Roseanne Reid is rapidly becoming a rising star on the UK folk and Americana scene. In recent months, she’s toured with the legendary Kathy Mattea, appeared on Jools Holland’s Radio 2 show and played her first London headline show at St Pancras Old Church. Now she’s releasing her debut album, Trails, which has been over two years in the making.

The album opens with Amy, which Reid recently released as a single. It’s a lilting, gentle melody which shows off Reid’s skill as a songwriter. The lyrics are packed with details that help to create the vivid title character, whilst Reid’s husky yet low-key delivery was full of conviction and passion. It’s one of the standout tracks on the record and set a very high bar for the rest of the album.

Throughout listening to Trails, one thing that particularly struck me was the range of styles that Reid covers. Whether it’s the Bob Dylan-esque Heading North, which marries 60s folk with classic rock touches, the country twang of Me Oh My with its soft, almost freestyle vocals or Take It From Me, a swinging bluesy number featuring funky guitar riffs and jazzy organ touches, she’s able to effortlessly turn her hand to different sounds. I also thought her use of instruments to build up the story behind her songs was very clever, particularly the wailing guitars, shuffling rhythm and long outro that mimicked the sound of water on Hey River, and Out In Space with its shimmering, distorted melody and almost spoken-word approach that brought out Reid’s Scottish accent.

Some of the album’s best moments came during the love songs. I Love Her So had a fantastic old-school soul feel, with sharp horns and smooth vocals from Reid that filled the lyrics with an infectious sense of joy. Meanwhile, It Is You had a lively toe-tapping feel that balanced out the sweetness in Reid’s voice, and Miles Away tugged at the heartstrings with its yearning vocals and downbeat melody.

However, the standout track for me was Levi. Although Reid takes a sparse approach to the song, she’s able to develop a really strong sense of character throughout and capture his emotions, as well as offering a message of resilience (a theme she returns to throughout the album) in the chorus. She strikes a great balance between sadness and hope and the string add a lushness to it too. It’s a simple song, but incredibly effective and powerful as a result. I also really enjoyed Sweet Annie, which features the legendary Steve Earle – his and Reid’s voices work really well together and I liked the traditional feel of the melody, as well as the vulnerability and openness in Reid’s lyrics.

The final track on the album is What I’ve Done, which feels like a signature departure from the previous 11 songs. It’s got a much darker feel to it, telling the story of a condemned man awaiting his fate. Reid does a brilliant job of capturing the character’s sense of resignation in her lyrics and subdued vocals, whilst still managing to convey an edge of defiance, and the stripped-back melody puts her voice front and centre, particularly during the a capella ending. It’s definitely a song that stays with you and something I’m intrigued to hear her explore more of in future.

Altogether Trails is a strong, assured debut record with a lovely timeless feel and a great blend of blues, Americana and folk influences. However, what elevates it for me is Reid’s distinctive vocals and her skill as a songwriter. She has a great ability to draw you into the world of her songs and create characters who are so vibrant and alive you almost feel they’re real, and is definitely living up to the hype as one of the great new voices in the genre. When I spoke to her recently, she mentioned that she already has material for a second album and is hoping to start recording later this year. I personally can’t wait to hear what she does next.