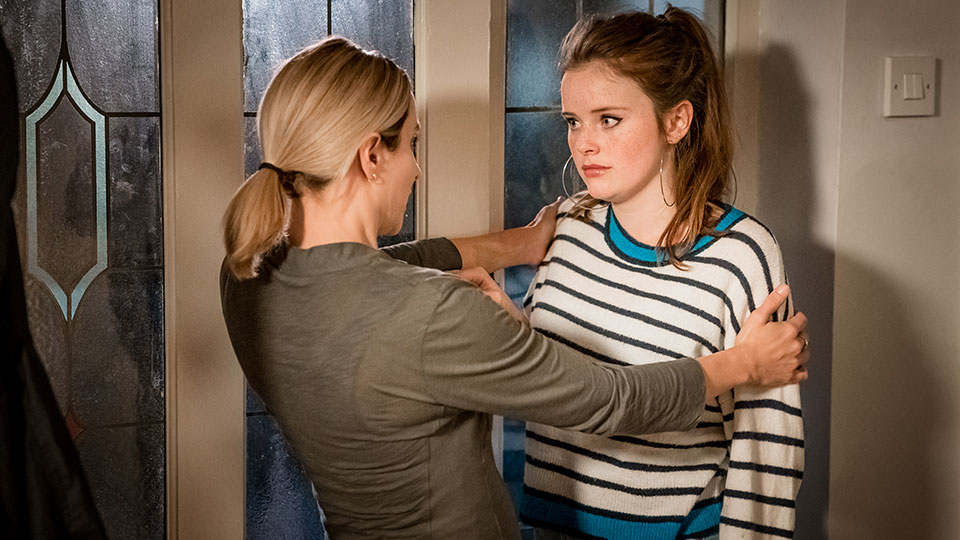 Nick (Matthew McNulty) went missing on this week’s episode of The Bay, making him look even guiltier than he already did.

If you want to avoid spoilers for The Bay, we suggest you stop reading now.

Holly’s (Darci Shaw) back pack was found to contain her clothes, a heck of a lot of money and a new mobile phone. Lisa (Morven Christie) reported the findings to Jess (Chanel Cresswell) and was furious when Med (Taheen Modak) assured Jess that they would find Holly alive, something he obviously couldn’t promise.

Apologising to Lisa for mis-speaking, Med offered to go and help Nick’s mum Sue (Hazel Ellerby) who called to tell them Nick was missing. Realising that without Nick, she had no career, Med went around to the house.

Lisa arrived back at the station during a briefing where it had been discovered that Sean (Jonas Armstrong) and Jess had been the recipients of an £8,000 deposit, which could explain the money that was found in Holly’s bag.

At the Mooney house Med could hear Sue shouting from inside and had to smash a window to get inside. Once in, he found Sue had fallen over in the shower so he helped her up and took her to the bedroom so she could get dressed.

Tony (Daniel Ryan) told Lisa that she would have to go back to Jess’ and get DNA samples from the whole family to rule them out of the investigation. Lisa’s request to take DNA wasn’t greeted well but Sean convinced Jess to let Lisa do her job pointing out that his had already been collected.

After getting the sample from Jess, Sean and Lisa had a tense conversation in the kitchen when she asked him if he knew where Nick was. Sean reacted angrily but Lisa kept pushing, asking him where the £8,000 had come from. He claimed that Ryan (Philip Hill-Pearson) gave him the money after he begged for help.

Back at the station Stew (Simon Manyonda) traced the phone from Holly’s back pack to a location on the bay. A team was sent out to scour the area and look for clues. They found a number of patches of blood and had to shut the area off as a crime scene.

As Lisa tried to get to the bottom of Jess and Sean’s money problems, she suggested that they apply for compensation, telling them they were entitled to up to £11,000 as one of their children had died. Sean flew off the handle when Lisa told them it would be split between the biological parents and Jess insisted she didn’t want the money. Margaret (Tracie Bennett) enquired further, offering to do the paperwork so they could get their hands on the money.

Hoping to get more leads to Holly’s whereabouts, Tony asked Stew to send a picture of the back pack to the media.

Nick’s whereabouts were finally revealed. Sean, Ryan and Krzysztof (Jordan Misfud) were holding him captive while they pressed him for information about Holly. Sean gave him some food and tried to appeal to him by being nice but he wasn’t able to get any answers.

Stew followed a lead to the train station where he found CCTV of Holly the day before she disappeared. She was buying a ticket and was accompanied by a man wearing white trainers with a red stripe on them but the CCTV cut off his face. He relayed that information to Lisa, who then pressed Jess for information. She confided that Ryan used to discipline Dylan if he stepped out of line but assured Lisa that he had nothing to do with that social services visit that keeps cropping up.

Med questioned Ryan to find out if his story supported what Sean said. Ryan admitted he did give him the money and passed it off as ‘what families do’. Lisa arrived and she spotted that Ryan was wearing the same shoes that were captured by CCTV so took a DNA sample from him.

Meanwhile Sean kept pressing Nick for information but he wouldn’t talk. Eventually Nick said he wasn’t allowed to say anything.

As Lisa arrived back to the station, Tony told her they found a match for the blood under Dylan’s (Noah Valentine) finger nails. It belonged to… Holly! That made her the prime suspect in the murder.

Lisa’s kids continued to run amok under her nose without her noticing (again) this week. Abbie (Imogen King) broke the rules of her suspension and entered the school grounds so she could manipulate Sam (Louis Greatorex) into passing Vincent’s (Adam Long) drugs on to one of their classmates.

Sam agreed to do it but when he realised what was in the package Abbie gave him, he turned up at her house furious. Demanding an explanation, Sam flushed the drugs down the toilet and left. It was established earlier that Vincent didn’t believe that Abbie had passed the drugs on when she had nothing to give him back.

Meanwhile Rob (Art Parkinson) carried on with his rebel without a cause impression smashing up security cameras and robbing food banks. After almost being caught at the food bank, Rob messaged the person pressuring him on his app to tell them he was out.

Lisa did actually try to speak to her kids about their behavioural issues this week but that went down like a lead balloon when the accused her of questioning them about the disappearance of the twins rather than being a concerned mum.

The episode ended with Sean and Krzysztof dumping a battered and unconscious Nick outside a hospital before driving off in their van.