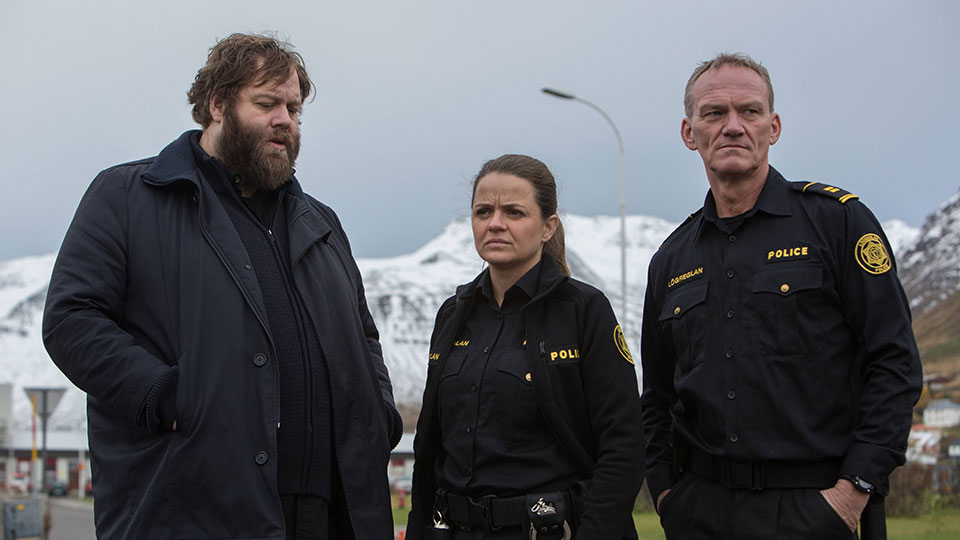 Arrow Films is pleased to announce the Monday 1st April DVD release of the complete second season of the thrilling Icelandic crime drama Trapped. The series is currently being aired on BBC Four on Saturday evenings at 9pm.

Former local police chief, Andri Ólafsson has started a new life in Iceland’s capital of Reykjavik. As he tries to rebuild a shattered family at home, an attempt to assassinate a politician through self- immolation throws his work back into the deadly cat and mouse games he had been trying to escape.

Quickly learning that the attacker was the politician’s twin brother, his investigation leads him back to the same small town he had run from, and to his old partner. As he and Hinrika, now the town’s Sheriff, start putting the pieces together, they realise that the seeds of crime may have struck root higher up than they ever thought possible and as such the risk to both them, and their loved ones, has never been greater.

The much-anticipated return of Iceland’s highest-rated series ever is an exploration of psychological rather than physical entrapment, as Andri comes to realise that after confronting human nature’s icy depths in the first season, he has in fact barely scratched the surface.

In 2016, Season One received the highest budget invested into an Icelandic series and premiered to 1.2 million viewers on BBC Four. Over the past three years has been watched by 10 million people in the UK, Germany, France and Scandinavia. In 2016, the Guardian newspaper hailed Trapped as “the sleeper hit of the winter.”

As with Season One, Trapped: Season Two is under the direction of acclaimed filmmaker Baltasar Kormákur who helmed 2015’s true-story epic Everest. High expectations have been met with glistening reviews of Season Two.

To celebrate the release we have 2 copies on DVD to give away. Enter below for a chance to win…