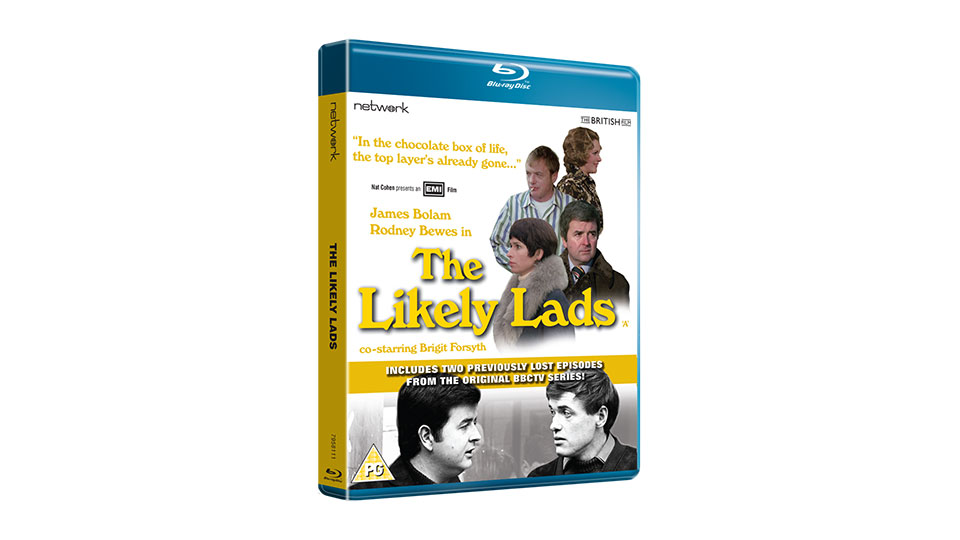 Whatever did happen to those likely lads? Over fifty years since they first graced television screens in the 1960s, Terry and Bob are back in a re-mastered version of the 1976 feature film spin-off, The Likely Lads, alongside two classic episodes from the 1960s series that have been recovered and restored – unseen since their final transmission in 1967!

Starring Rodney Bewes and James Bolam from comedy writing legends Dick Clement and Ian La Frenais The Likely Lads (1964-66) was the phenomenally successful series following Bob and Terry as life-long friends with vastly different outlooks on life. The BAFTA winning sequel series, Whatever Happened to the Likely Lads? (1973-74) aired ahead of the feature film spin-off, The Likely Lads in 1976.

The film charts Thelma’s (Brigit Forsyth) continued annoyance at her husband Bob’s (Bewes) disruptive friend which shows no sign of abating. But when Terry (Bolam) lands himself a new girlfriend Thelma sees her chance to finally get Terry married off and out of her and Bob’s life forever! Her solution of touring the north of England in a caravan, however, leaves a lot to be desired…

Now receiving its first ever release on Blu-ray this presentation includes High Definition re-masters of two episodes from the original series which have been recently discovered on 16mm telerecorded prints.

Of the 21 episodes from the three original series, only eight episodes were known to exist prior to 2016, at which time two previously lost examples resurfaced together on 16mm telerecordings from a private collection. These two ‘lost Likely Lads’ – A Star is Born and Far Away Places – are presented here for the first time in over fifty years, unseen since the series’ final repeat run in 1967:

Dick Fiddy, Co-ordinator of BFI’s Missing Believed Wiped campaign has said, “The Likely Lads was an influential and key sitcom launching the careers of Dick Clement and Ian La Frenais, and providing BBC2 with its first comedy hit. This exciting and important rediscovery of two complete missing episodes from the series is wonderful news.

The Likely Lads continues Network’s roll out for The British Film: Phase II home-entertainment label – information on previous and upcoming titles can be found here – www.thebritishfilm.co.uk.

To celebrate the release, we’ve got 2 copies of The Likely Lads on Blu-ray to give away. Enter below for a chance to win…

In this article:The Likely Lads