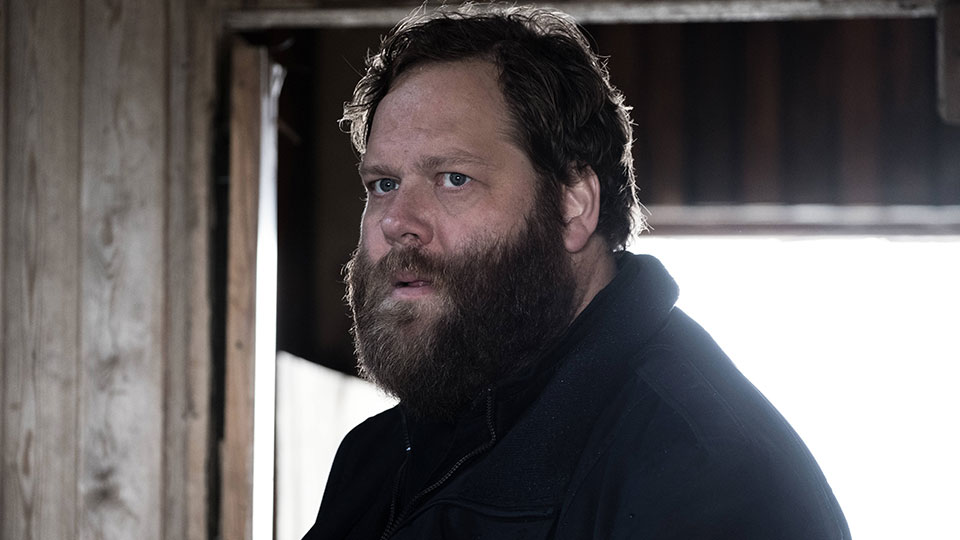 Most Scandinavian crime dramas tend to be a bit left-field. Quirky characters, bizarre plot lines, extraordinary scenery – they’re pretty much de-rigueur for a Nordic crime show these days. But our Icelandic friends have taken things to a real extreme with Trapped.

Those of you who enjoyed Season 1 will recall that things got very messy for the bearded behemoth that is Andri Ólafsson (played by the wonderful Ólafur Darri Ólafsson, who will also be seen on our screens shortly in the Kate Beckinsale thriller, The Widow). Sent to be the police chief in a remote town in northern Iceland – mainly as punishment for his conduct in the capital – Andri finds himself and the entire community trapped (see what they did there?!) following a snow storm. He investigates a missing person case – and then a murder – and fumbles his way through the entire series in a permanent state of endearing prosaic befuddlement!

Season 2 of Trapped sees him re-located to Reykjavik from the frozen isolation of the north, but his daughter, Þórhildur (Elva María Birgisdóttir), wants nothing to do with him and has chosen to remain with family in the middle of nowhere. Having redeemed his career and been welcomed back to the capital, Andri’s called upon to investigate the attempted murder of a senior politician who was grabbed outside of her office by a man covered in petrol, who subsequently sets himself and her alight. Turns out, the victim and the perpetrator (Gísli – who died as a result of his injuries) are estranged siblings whose lives have taken very different paths over the years.

Andri finds the investigation has links to a right-wing extremist group who are located – as luck would have it – near where he had previously worked in the north of the island. Therefore, he finds himself reunited with the reliable and resolute Hínrika (Ilmur Kristjánsdóttir) and computer-nerd and all-round good guy, Ásgeir (Ingvar Eggert Sigurðsson) from Season 1 as they investigate Gísli’s background.

The locals are somewhat less than friendly – led by Ketill, the local farming community are concerned that a new gas processing plant has been killing their livestock. They announce their displeasure by dumping Gisli’s dead sheep in front of the town hall – which is one way to vent your anger, I guess. Add in the murder of a local homophobic power plant employee, a false confession and various tensions in Hinrika’s home (where Andri is sleeping on the couch) and you have a heady (and complicated) cocktail of plotlines. And that’s just the opening couple of episodes!

Throughout the entire series, the complexity of the plot is unrelenting. The storyline jumps from one gory pillar to another; and what with the dead sheep, a killed dog, abductions, right-wing extremism, symbolic ravens (portents of doom, of course), poisoned birds and fish, and displays of homophobia (not to mention the murders!), it’s not always an easy watch. Throw in the sub-titles and the often – to ears that are unused to them – impenetrable Icelandic names, and you have a series that demands you pay attention.

By the final couple of episodes, one of the main characters has been stabbed in the stomach and is driven away by their attacker. Then a second main character is also abducted, resulting in a thrilling and moving finale.

There’s a lot to warm to about this second season. If I’m totally honest, I preferred season 1 as it had more of the wonderfully bleak scenery and feeling of claustraphobia; the second season is a bit more formulaic and made up of standard Scandinavian fare, perhaps. But the first season had set the bar pretty high, to be fair.

The main pleasure this time around came from seeing the professional relationship between Andri and Hínrika – two highly original and likable characters who are beautifully portrayed by the actors. Less pleasurable to watch was the annoying daughter of Andri – Þórhildur – who seemed to be in a permanent state of stroppiness and misery. I know she’s a teenager, but she really did become tiresome towards the end.

I believe a third season is in the works – and it should be worth watching out for.