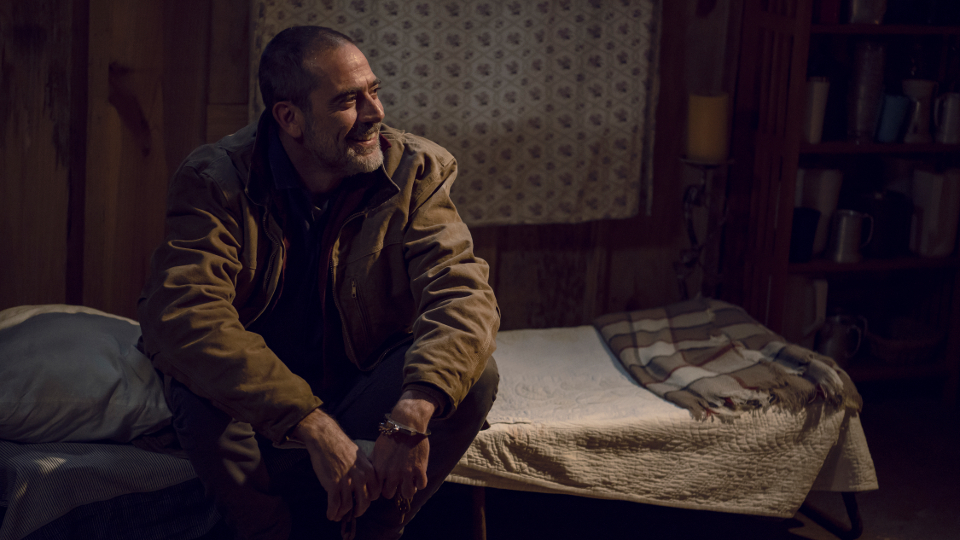 On the season finale of The Walking Dead, the communities were faced with a devastating blizzard which forced them to make difficult decisions in order to survive.

In the last episode, Alpha (Samantha Morton) infiltrated the Kingdom’s fair and abducted ten people. She then placed their heads upon spikes to mark the border to her land.

In the season finale, winter had most definitely arrived and it was causing all kinds of problems for the communities of Alexandria and the Kingdom. The Kingdom were worst hit and the cold had caused their pipes burst. It seems only a short time has passed since the fair and Ezekiel (Khary Payton) and Carol (Melissa McBride) were still broken at the loss of their son Henry.

A decision was made to abandon the Kingdom and take the entire community to Hilltop. This meant a difficult journey but with Ezekiel, Carol, Daryl (Norman Reedus), Michonne (Danai Gurira) and Jerry (Cooper Andrews) taking the lead what could go wrong? Thankfully, not a great deal and they decided to make an overnight stop at Sanctuary.

On the way they came across a variety of walkers and were constantly aware that some of them could be Whisperers keeping an eye on them. Daryl and Carol took a couple of walkers out with arrows and Ezekiel joined Daryl to help collect the arrows. Away from the main group, Ezekiel basically asked Daryl to leave him and Carol alone to make a fresh start at Hilltop. Carol later asked Daryl if anything had happened but Daryl said it hadn’t.

As the group continued their journey, Alden (Callan McAuliffe) laid into Lydia (Cassady McClincy) but Daryl promptly stood up for her. Lydia later ran off on her own and found a walker trapped in ice. Thinking everyone would be better off without her, she removed her glove and offered the walker her bare arm. She changed her mind after Carol came to find her and saw what she was doing.

With worsening conditions, the group became worried about surviving the journey. If they still had Rick’s bridge things would have been a lot easier. Carol proposed that they take a shortcut through Whisperer territory which made Ezekiel uneasy as he didn’t want to start a war. Carol said that the borders were Alpha’s not theirs.

With little choice they decided to take the shortcut at night and hope that they didn’t get spotted. The biggest risk was probably the large amount of footprints and dead walkers they were leaving but they didn’t try to cover this up. Eventually they made it to the river and Daryl and Michonne tested the ice to make sure it would hold.

Lydia again ran off and it was Carol who went after her again. This time when Carol caught up with her, Lydia begged Carol to take her life. She said it was her fault that her mother had killed so many people, including Henry. With tears in her eyes it looked like Carol might put Lydia out of her misery but instead she killed a stray walker and told Lydia that she wasn’t weak. She then grabbed her hand and took her back to the group.

As the group began to cross the river, walkers started to pop up all around them from under the snow drifts. For the most part they were easy to take out but one almost got the better of Daryl. He killed it using a large icicle. Eventually the whole group made it safely across the river and arrived at Hilltop.

Meanwhile, at Alexandria, the cold was forcing the community to huddle together in the homes with the largest fireplaces. Negan (Jeffrey Dean Morgan) had to be released due to the cold and the awkward group of Gabriel (Seth Gilliam), Rosita (Christian Serratos), Eugene (Josh McDermitt) and Siddiq (Avi Nash) kept an eye on him along with Judith (Cailey Fleming). Negan entertained himself by poking fun at Gabriel due to the situation with Rosita, Siddiq and Eugene.

They huddled together around the fire to keep warm but it turned out their chimney was blocked. This forced them to head over to Aaron’s (Ross Marquand). They used a rope to keep together in the blizzard but Judith ran off when she heard Dog barking. Negan also broke ranks and ran off after her.

Unable to see much in the blizzard, Negan repeatedly called out and was knocked to the floor by a flying piece of metal. It hurt his leg quite badly and left him limping and in pain. He soldiered on and eventually found Judith with Dog. He managed to pick Judith up and carry her which Dog led them back. Eventually he stopped for a rest and to check on Judith. Realising how cold she was he removed his jacket and wrapped her in it before picking her up and continuing.

The next day, Carol decided to break things off with Ezekiel and removed her ring. Ezekiel understood but promised that he would never stop loving her. Carol decided to go back to Alexandria with Daryl, Michonne and Lydia. When they did arrive Michonne was delighted to be reunited with Judith and RJ and a snowball fight broke out. It looked like the first time they’ve all had fun for ages. Michonne later went to see Negan and thanked him for what he had done for Judith.

After the blizzard we briefly spent some time with Alpha and Beta (Ryan Hurst). It seems the Whisperers had been away to avoid the blizzard. Beta said that the time away had been good for the pack. Alpha said she needed to not make more mistakes and needed to be stronger for what came next. She then had Beta whip her repeatedly across the arm. Does she know that the survivors crossed her land?

At the end of the episode, Ezekiel chatted to Judith via Eugene’s now working radio. After they finished, a new transmission came in. It was hard to make out with the static but it sounded like a female voice asking “is anybody out there?”.

The Walking Dead will return for season 10 around October 2019 on AMC in the US and FOX in the UK.