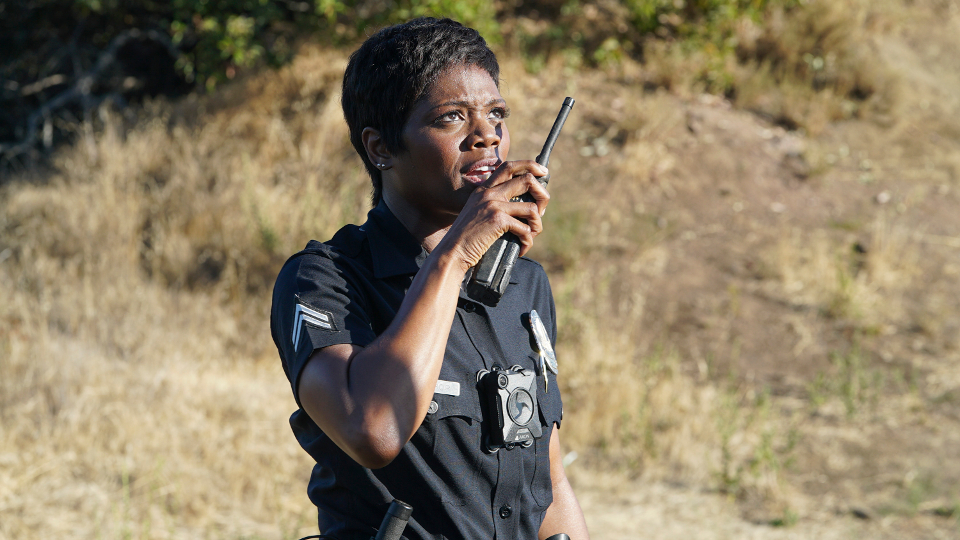 The second episode of The Rookie season 1 saw Chen (Melissa O’Neil) temporarily placed with a new training officer who really tested her patience.

The episode opened up with Nolan (Nathan Fillion) and Bishop (Afton Williamson) in pursuit of a red Jeep. Worried about causing an accident, Nolan failed to stop the Jeep several times. After chasing it into the Hollywood hills he finally executed a takedown manoeuvre.

They leapt out their car as a woman wearing a wedding dress got out of the Jeep and ran off. Nolan ran after her and followed her as she climbed atop the Hollywood sign. She was upset because her fiancé had cheated on her with her cousin. Nolan offered her a lottery ticket as a sign of hope for the future. It worked but she fell as she agreed to come down and was saved by Nolan quickly grabbing her dress.

At home with Chen, Nolan worried what would have happened if he hadn’t saved the woman. He suggested taking a sick day but then realised it was a bad idea. Particularly because it would be noticed if they were both off and that might give their secret away. What he didn’t know is that Bishop already knows and she later challenged Chen about the relationship. Later, Chen told Nolan she just wanted to keep things casual.

At the precinct, Wade Grey (Richard T. Jones) laid into Nolan for causing $21,000 worth of damage during his pursuit. He then assigned Scott Wrigley (Joe Williamson) as Chen’s temporary training officer. Captain Zoe Anderson (Mercedes Mason) called in Lopez (Alyssa Diaz) and West (Titus Makin Jr.) to ask why West didn’t fire his weapon. Lopez covered for him and said she told him to stay down as he didn’t have a clear shot. Afterwards he thanked her but she said she was making sure the incident didn’t affect her promotion chances.

Lopez said she needed to make sure West didn’t freeze up again. She decided that they would take all high-risk calls that came in. Their first call was to a church where a man was off his face on PCP and destroying everything. Cops were already on scene but were awaiting special ops. Lopez decided she and West would head in anyway. West was able to talk the man down with the offer of water to the surprise of their fellow officers.

Bishop and Nolan were called to a car on fire and found a woman who said she’d done it. The car belonged to her meth dealer who she was annoyed at for taking her money but not giving her enough drugs. She then admitted to stabbing the dealer’s brother so they had to arrest her and found a knife in her bag. They went to check on the brother and found that he had died from the stabbing.

Wrigley tested Chen’s patience by only taking on boring cases such as parking violations. He then dropped her off at a diner while he headed home for lunch. There she ran into Bradford (Eric Winter) who was earlier discharged from hospital and a call came in three blocks away. He suggested she get running and she made it in time to catch a shoplifter.

Back at the station, the three rookies were all tasked with booking each of their arrests. Grey reviewed their cases and praised West and Chen but picked fault at Nolan’s. Bishop went to see Grey to complain but he told her that failing to train Nolan would affect her future.

As Nolan and Bishop headed back out, they were chatting and Nolan accidentally knocked down a woman who came running into the road, damaging his car again. He jumped out to check on her and found she was hysterical and that she’d been bound with tape. Grey told Nolan off again and two detectives were brought in to look at the case.

The woman had been held prisoner and managed to escape. She mentioned a fellow captive called Emma. Unfortunately she had no idea about who kidnapped them or where they were held. The detectives got to work and told Bishop and Nolan to canvas for witnesses.

Their next call was a man who had stolen a scissor lift. He refused to stop because his supervisor owed him money and he planned to sell it. Nolan cut him off with his police car and the man rammed straight into it causing yet more damage. Back at the station they were given a really old police car in place of their new expensive ones.

West and Lopez responded to another call in search of a suspect. Lopez sent West in solo and he found the man. He attacked West but West got the better of him and managed to get him in cuffs.

Nolan and Bishop went to the hospital and managed to get a quick word with the kidnapped woman. She said that while being held she could hear a voice repeatedly saying ‘wait’. Bishop realised this was a pedestrian crossing for the blind and there was only one in their search grid.

Nolan made a call at a nearby house and met a security guard. Meanwhile, Bishop checked his car and realised they had found their guy. Bishop shouted to Nolan and he just escaped being shot. Nolan ran inside and the door closed behind, leaving Bishop outside so she called for backup.

Nolan made his way through the house and managed not to get shot several more times. He couldn’t find the man but did find the other kidnapped woman, Emma. As he tried to free her he was attacked by the man. He then prepared to shoot Nolan but was distracted by Bishop ramming the house with their car. The man fled as backup arrived and Nolan gave chase with Chen.

Bishop arrived on scene and stopped the man. Nolan lost in, tackled him to the floor and then began to punch him repeatedly. Bishop had to drag him off the man. The Captain later told him he couldn’t do that and needed to learn to rise above it.

Later, Lopez praised West. Chen spotted Bishop with Wrigley and realised that their day together had been a test created by Bishop. Nolan was given unexpected praise and a stack of paperwork by Grey. Bishop took half from him and said she’d help.

At the end of the episode, Nolan and Bishop got a new police car again and Nolan almost crashed it straight away!

Can’t wait for the next episode? Read our preview of The Rookie episode 3 The Good the Bad and the Ugly.