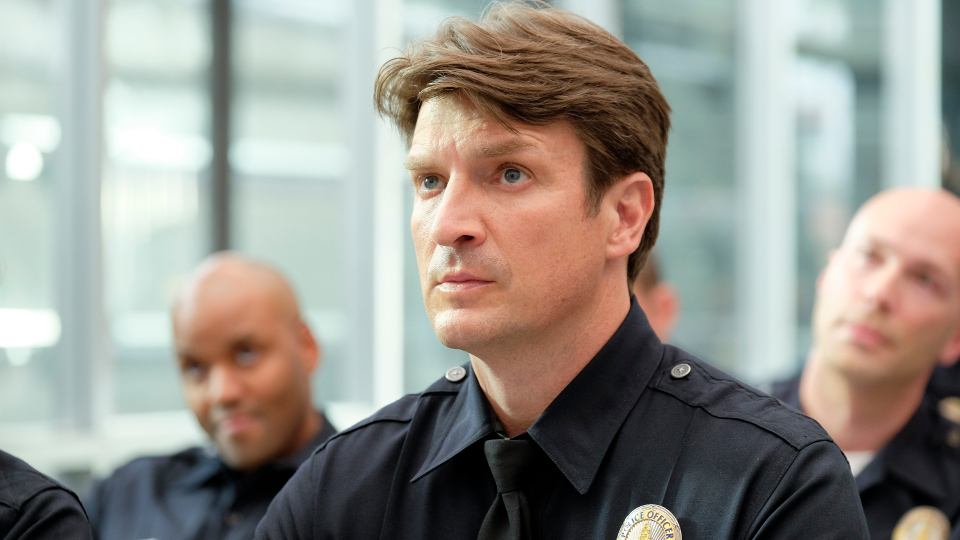 The first episode of The Rookie season 1 saw John Nolan (Nathan Fillion) pursue his dream of becoming a police officer.

The episode opened up with Nolan heading to the bank to deposit his divorce settlement and wedding ring. As he was leaving the bank two armed robbers stormed in and made everyone get on the ground. Nolan kept them distracted by talking to them which allowed the bank manager to press the distress button. Despite being threatened at gunpoint, Nolan continued to distract them until the police arrived.

The experience inspired Nolan to become a police officer and months later was his first day at the LAPD. He was joined by fellow rookie’s Lucy Chen (Melissa O’Neil) and Jackson West (Titus Makin Jr.). The were welcomed by Sgt. Wade Grey (Richard T. Jones) who also took the opportunity to poke fun at Nolan’s age.

The trio were partnered up with more experienced training officers. Nolan with Talia Bishop (Afton Williamson), Chen with Tim Bradford (Eric Winter) and West with Angela Lopez (Alyssa Diaz). It seems being a rookie cop means being thrown in at the deep and and that’s exactly what happened to all on their first day.

Nolan and Bishop were called to a domestic incident where they found a large man and his small wife. The pair were questioned separately with Nolan taking the man outside. He suspected that the man was actually the one being abused by his wife by the man asked them to leave it. Bishop knew they had no choice to leave them to it but presumed they’d be called back in the near future. They were right and a later call saw the wife stab the husband to death with Nolan helpless to save him.

The next call was about a crazy man who was smashing up cars and ranting about unicorns. Nolan managed to get the guy to talk a little and he discovered that he’d lost track of his young son who was locked in a car somewhere in the sweltering heat. The cops are scrambled and it’s Nolan who eventually found the car with the kids trapped inside. He repeatedly tried to smash a window with his baton until Bishop came and used the correct tool. Nolan took the kid out and thankfully he was ok.

The rookies went out for beers after shift and a waitress kept eyeing up Nolan. She eventually left him her number and it looked like they’d gone home together. However, it turned out that Nolan went home with Chen. The pair had been dating for a while and had to keep it secret from their colleagues.

The following day the cops were on the lookout for a dangerous man. Bradford and Chen tracked him down and found themselves under fire. Bradford took a bullet and Chen tried to help him. Lopez and West arrived but West was useless as he froze. The suspects tried to flee but were cut off by Bishop and Nolan.

They crashed their car and one man fled. Nolan left Bishop to deal with the one left in the car who appeared to be unconscious while he gave chase. It was a bad decision and Bishop found herself in a fight. Nolan did catch up with the man who took a woman hostage with a knife to her throat. Nolan managed to talk him down and took the opportunity to fire a round into his leg.

Back at the precinct, Grey told Nolan he was done for abandoning his partner. However, Captain Zoe Anderson (Mercedes Mason) called Grey in and told him to reconsider. Bishop spoke to Chen and said she knew about her relationship with Nolan. She advised that they break up.

At the end of the episode, Nolan spoke to Grey outside work. Grey promised to keep ridiculing him and generally giving him a hard time. Nolan said that he earned his place and wasn’t going anywhere. Grey said being a cop was his calling and if it turned out to be Nolan’s calling, nothing he or anyone else did to Nolan would stop him.

Can’t wait for the next episode? Read our preview of The Rookie episode 2 Crash Course.