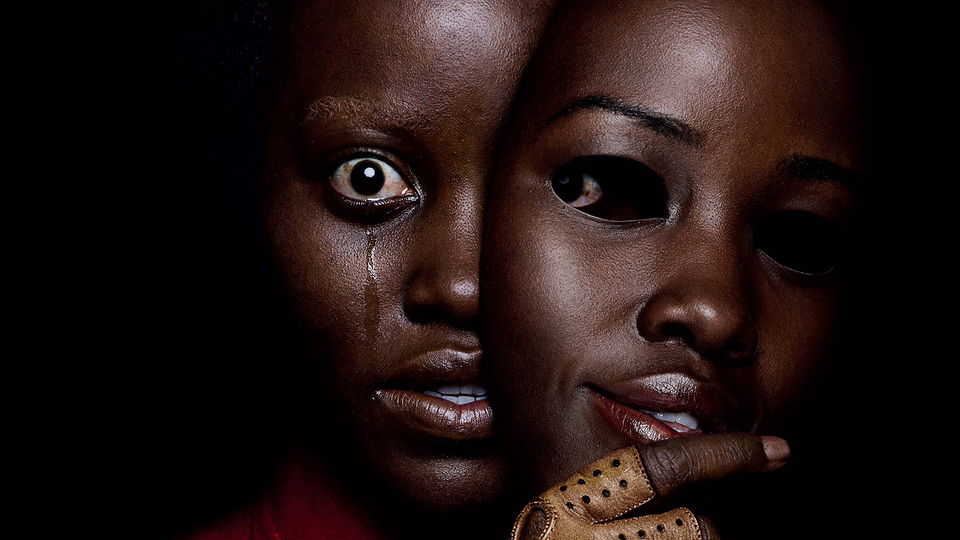 Jordan Peele is a talent on the rise. Having won an Academy Award for his ground-breaking horror Get Out, Peele is shortly going to be fronting and producing a brand new reboot of The Twilight Zone TV series. But before this, he brings us… well, Us – a psychological horror that has garnered huge buzz over the last few months. The trailer alone was fantastic so expectations were high on this. The end product is certainly an entertaining and creepy watch, but one that I felt got too convoluted as the film progressed.

Gabe and Adelaide Wilson (Winston Duke & Lupita Nyong’o) take their children to a holiday home for a much-needed vacation, but when they get there they are confronted by a group of individuals who look just like them, all dressed in red jumpsuits and brandishing scissors. A past childhood trauma for Adelaide could hold the key to why this nightmare is taking place as the family look to survive the surreal ordeal.

I won’t go into more detail as that would do the film a massive disservice, but the film does start very well. We get to see Adelaide as a child (played superbly by Madison Curry) visiting a funfair with her parents before wandering off and stumbling across a mysterious attraction on the beachfront. This is such an effective scene with some stunning frames from Peele as Adelaide witnesses something horrific that will haunt her forever.

We are then drip-fed moments from her past to piece together as the now adult Adelaide brings her family for a vacation, but with a nervous sense of dread tapping on her head throughout. Visually, Peele knows how to get the requisite chills going early on. The film is bathed with nightmarish visions and when the ‘other’ family shows up, he crafts some deft jumpy moments that hit their marks very well.

The strength of the film lies with Lupita Nyong’o who is a revelation here. She’s always been great – this isn’t news – but her dedication to this role is simply stunning. She plays the dual role of Adelaide and her other self ‘Red’. Red is terrifying – from the way she speaks to the piercing stares and the devilish smirks. It’s one of the best onscreen transformations I’ve seen for quite some time.

Winston Duke (M’Baku in Black Panther) gives Us a healthy dose of humour and relatability. Us has a lot of funny moments and most stem from Gabe’s inability to handle the situation at hand. A flare gun scene is a particular highlight. Shahadi Wright Joseph and Evan Alex do a lot of the heavy lifting too as the kids in the family, and hand in really impressive roles that will no doubt put them on the map as their career’s take off.

Elisabeth Moss and Tim Heidecker are fine as the Wilson’s family friends who are vacationing down the road, but it’s their twin daughters (played by Cali and Noelle Sheldon) that provide some of the best scares later on. Yahya Abdul-Mateen II and Anna Diop play the integral roles of Adelaine’s parents who are in a strained relationship (told in key flashback scenes).

What Peele does get right is that he makes a choice to tell his story and to explain some of the more vital components at the end. In this instance, that was an imperative move as the story expands past the confines of the holiday home. Many horrors would have kept the story enclosed in that environment but Peele goes big with this. I personally would have preferred a more contained horror as I think it would have been far more effective on a scary level, however I appreciate his vision for this. The bold step of making this bigger than a one-note scare is one to be applauded, even if the end result isn’t as effective as I would have liked.

Us is an intelligent horror that perhaps tries a little too hard. It has an interesting premise and the subtext is fascinating to pick apart, but at times this felt too expansive. When the reveal does take place it also raises some plot-holes and questions that detract a little from the end product. But the success of Us lies in its ensemble who all hand in stellar performances and who do more than enough to warrant this a watch, along with a fantastic soundtrack that plays to the very heartbeat of the film.