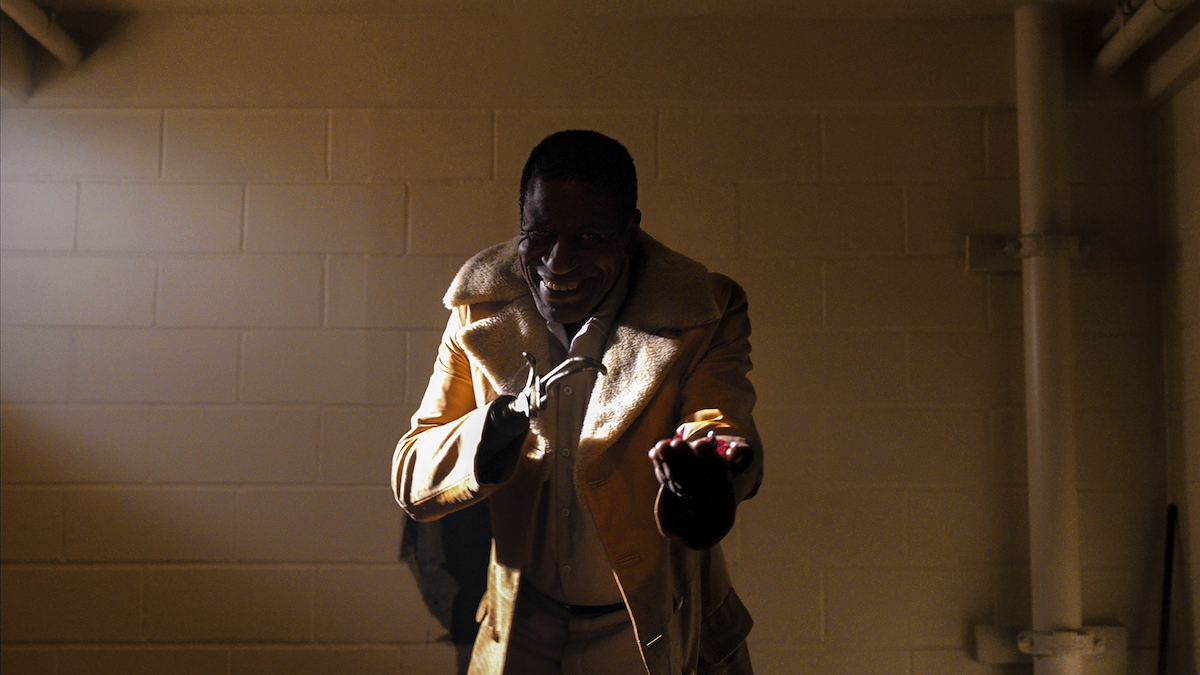 I tweeted recently about how I wish movie trailers would stop being better than the films they are advertising. ‘Candyman’ (2021) is Exhibit A of this irritating phenomenon. It was brilliantly marketed with slick promo clips to appear as if this was a fresh and timely take on Clive Barker’s short story. From the trailer alone it was being hyped as this year’s ‘Get Out’. That has proven to be a bit of an overstatement.

You could effectively review this new version of ‘Candyman’ in one sentence, with the iconic line from Garth Marenghi’s Darkplace: “I know writers who use subtext, and they’re cowards.” Nia DaCosta’s remake/sequel collapses under a barrage of extremely on-the-nose dialogue and clumsy socio-political commentary. No matter how beautifully shot the film is, it just cannot get out from under this desperately bland screenplay.

Yahya Adbul-Mateen II plays Anthony McCoy, a painter and visual artist living in Chicago with his girlfriend Brianna (Teyonah Parris), who is a director at a hip art gallery. Having seemingly lost his creative spark, he finds inspiration in the story of Helen Lyle and the Cabrini-Green housing project – a nice nod to the original film. Visiting what’s left of old Cabrini-Green—gentrification is a big theme of the film—he learns of the Candyman, the vengeful hook-handed spirit who haunts the projects. The urban legend around him is that if you say his name five times into a mirror, he will appear in the reflection and kill you.

Anthony becomes obsessed with the Candyman, making the spectral killer the centrepiece of his new show. In doing so he unwittingly unleashes him, whilst also going through a strange physical transformation himself. Reframing ‘Candyman’ as a black horror film, with a black cast, is an impactful choice. There’s something very interesting about the concept of inherited trauma, cycles of violence, oppression, and how this all ties in with the racial history of the United States. If only DaCosta, and her co-writers Jordan Peele and Win Rosenfeld had a bit more trust in their audience and not felt the need to explain this to us in every…single…scene.

After the promising 70s set opening, which eschews traditional scares for a more relatable real-world horror, ‘Candyman’ very quickly becomes a disjointed and overstuffed lecture. The simple horror fable and chilling mythology of Bernard Rose’s 1992 gothic slasher has been replaced with lukewarm social commentary and piss-weak horror. Not that the original didn’t have interesting things to say on race and inequality. It just did so in a much more elegant and terrifying way.

This version of ‘Candyman’ is a film bursting with ideas. In a mere 90-minutes it wants to say so much about so many things, from gentrification, class, race, police brutality, the horrors of the black experience, to pretty much every other hot button topic you’ve scrolled past on social media in the past few years. It’s well intentioned, but the film has nothing meaningful to say about any of these things. How can it when nearly every line of dialogue is just bluntly presenting these ideas over and over again? It just becomes banal clichés wrapped up in a confusingly bloated plot.

It’s not all bad though. Abdul-Mateen II and Parris make the best of the material they are given, and I have no doubt they are both going to go on and become huge stars. The film looks beautiful. There’s a really distinctive and weird visual style, which makes great use of wide shots and intimate reflections. There’s also a really fun massacre in a high school bathroom. Best of all is Robert Lowe’s extraordinary and hallucinatory score. It’s a shame that a film which looks and sounds as good as this is such a chewed-up mess.

The blu-ray release comes with a very decent selection of bonus features. We get an alternate ending (which I think I actually liked better) as well as 5-minutes of deleted and extended scenes. ‘Say My Name’ is a short featurette which goes behind the scenes of the film, with interviews with all the main players. The focus here is on the message of the film, the cultural relevance, and the social and historical inspiration.

‘Body Horror’ takes a close up look at the development of the film’s practical gore effects. This is a great little clip which allows you to see some of the incredible details that might not have come across in the film. ‘The Filmmaker’s Eye’ is more interviews with the cast and crew, this time focusing on Nia DaCosta and what she brought to the piece.

‘Painting Chaos’ is an interesting featurette about the commissioned artists who created the paintings for the film. ‘The Art of Robert Aiki Aubrey Lowe’ is a short piece on the film’s composer, who had the unenviable task of following up the work Philip Glass did on the original. As I briefly noted above, he does a great job.

‘Terror in the Shadows’ goes behind the scenes of the cool shadow puppet sequences which enabled them to flashback to the original film without actually using flashbacks. Finally, there is ‘The Impact of Black Horror’, a really interesting 20-minute discussion about the film from an academic and socio-historic perspective.