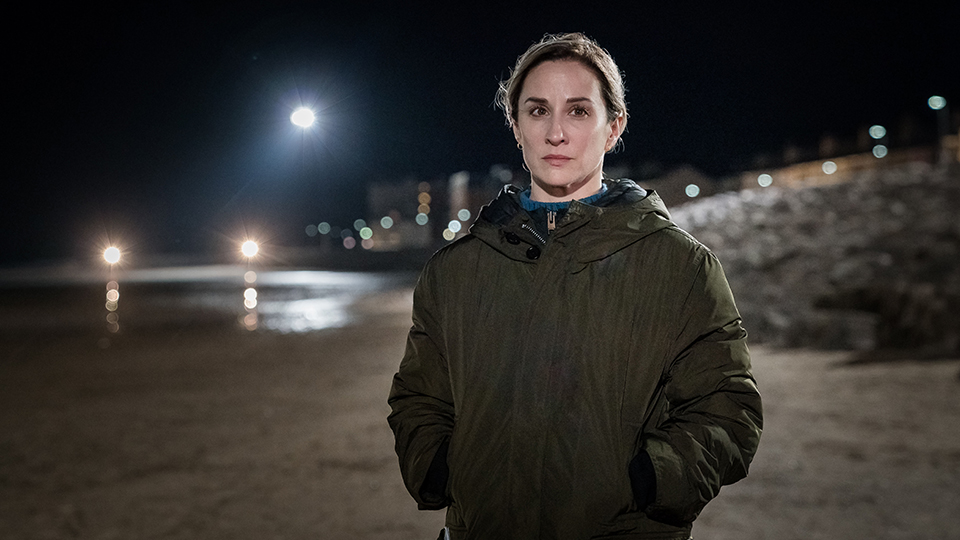 ITV‘s new six-part drama The Bay, set in Morecambe, began tonight and it wasted no time in getting down to business (literally).

If you want to avoid all spoilers for The Bay, stop reading this article now.

The episode kicked off with DS Lisa Armstrong (Morven Christie) getting all glammed up for a girls’ night out with her pals Bernie (Martina Laird) and Karen (Erin Shanagher). At a local pub, the trio sang karaoke and Lisa caught the eye of a stranger called Sean (Jonas Armstrong).

Following a brief exchange, Lisa ended up in an alley with Sean and they had sex. The next morning, while nursing a hangover, Lisa was late to work and arrived in the middle of a briefing about missing teenagers Dylan (Noah Valentine) and Holly (Darci Shaw). She was assigned the task of being the family liaison officer and was unimpressed to find out she’d have newbie DC Ahmed ‘Med’ Kharim (Taheen Modak) tagging along with her.

Lisa introduced herself to Jess (Chanel Cresswell), the pregnant mother of the two missing kids, who was overwrought with emotion. She calmed her down and explained she needed Jess to tell her as much information as possible. They were then interrupted when Jess’ husband calm home and much to Lisa’s shock it was Sean, the man she’d shagged the night before.

Keeping things professional, Lisa questioned Jess and Sean to find out if there was any chance they could have run away. Sean was keen to point out how happy they were as a family and Lisa asked if she could search their rooms to look for any clues.

Back at the station Lisa asked Med to write the family visit report and she took off to try and clear her head after the revelation she’d slept with a married man who was potentially a suspect in the disappearance of his own kids.

Lisa went to see Sean, who was working on the beach, and she questioned him further starting with why he pretended he and Jess were happy together. Sean admitted that there was issues between him and Jess involving money and kids but when Lisa probed further, Sean skirted around the question. He did reveal that they’d had social services sniffing around and that the twins weren’t his actual kids.

Shocked by the revelation, Lisa went straight back to Jess and asked why she never told her that Sean wasn’t the kids’ father. After a bit of digging, Jess gave Lisa the name of the twins’ biological father, Lee Ward (Ciaran Griffiths) but insisted he’d never had anything to do with either of his children. As she was leaving Lisa spoke to Jess’ mum Margaret (Tracie Bennett) who said she wouldn’t be surprised if the kids had run away.

Meanwhile Abbie tried to speak to Sam at school but he gave her the brush off.

Lisa set to work with Med constructing a family tree and gathering as much information as she could about each of the family members that were around Dylan and Holly. Tony told them that the kids were last seen at the youth club and that reports had suggested there were tensions between Sean and Dylan. He also asked Lisa to prepare the family for a press conference and asked her to look into Sean’s whereabouts, which worried her given what had happened between the two.

Back with Jess and Sean, Lisa tried to get to the bottom of the reports that Sean rowed with Dylan. Jess denied there was any tension. Lisa asked to talk to Sean in private but Jess refused to leave. That left Lisa with no choice but to awkwardly ask Sean his whereabouts the night before. He said he was in town with friends and omitted the fact that he’d met Lisa.

Lisa took Jess and Sean to the school for the press conference and she volunteered to get the CCTV from the pubs that Sean said he was in when Tony suggested he was going to do it. Following the press conference, Lisa got her hands on the security footage and rushed back to the office to check it out.

At school Abbie was taunted by some girls and got into an aggressive fight, which was broken up by Bernie. Lisa received a call from Bernie and rushed over to the school. Bernie played hardball and put Abbie on a two-week suspension. Lisa and Abbie got into an argument while in the car but they were interrupted when Tony called to say Lee had been in touch.

Lisa and Tony sat down with Lee, who painted a very different story to the one Jess had given earlier. Lee suggested that he was pushed out of Jess and the kids’ lives when Sean came along. He was adamant that Sean was bad news.

Tony asked for an update on the security footage and Lisa told him that there was an hour she couldn’t account for. She knew that part of that time was when she was with him but didn’t reveal that. Lisa then deleted the footage of them talking in the pub to cover their tracks.

A short scene saw Lisa’s son Rob (Art Parkinson) having a mysterious online chat with someone that seemed to be baiting him. Despite being suspended Abbie ignored the rules and went to a construction site where she got friendly with a workman. She arrived home that evening but caused a row between Lisa and her mum Penny (Lindsey Coulson).

Another call came in and Lisa dashed off to the beach where Dylan’s body had been found. She went to inform Jess and Sean of the discovery before returning to the beach, where Sean had rushed to. Lisa took him to one side to ask him again where he’d been after they’d had sex and before he met his friends but he wouldn’t answer.

Left with no choice, and increasing pressure from Tony, Lisa arrested Sean for the murder of Dylan and disappearance of Holly.