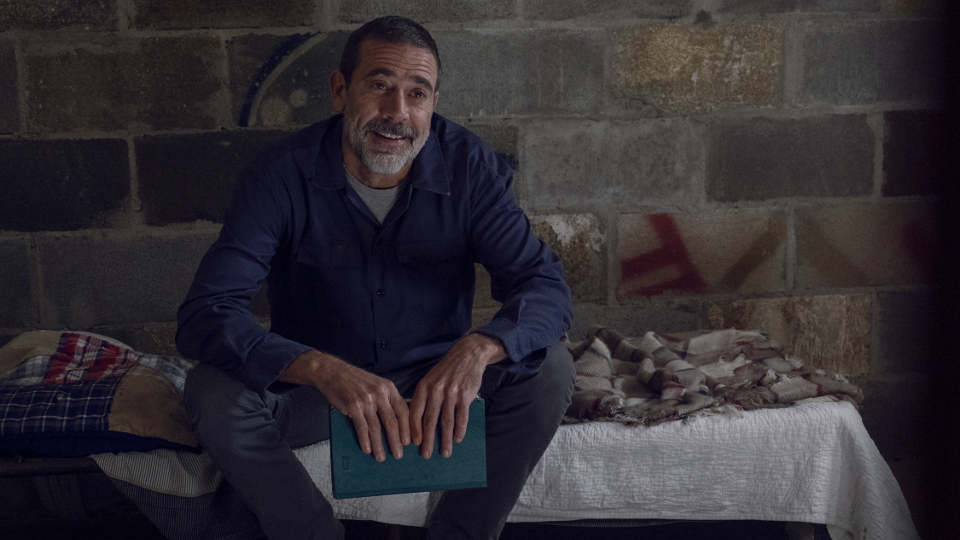 On the latest episode of The Walking Dead, we got to spend some quality time with the Whisperers. We learnt more about Alpha (Samantha Morton) and her ways as well as meeting her enforcer Beta (Ryan Hurst).

Last episode, Henry (Matt Lintz) left Hilltop to pursue the Whisperers and try and rescue Lydia (Cassady McClincy). After realising he was gone, Daryl (Norman Reedus), Connie (Lauren Ridloff) and Dog set our to try and stop him.

After leaving Hilltop with Lydia, the Whisperers shambled along together back towards a walker herd which is where they prefer to be. On the way Alpha confronted Lydia about her time at Hilltop. Lydia told her mother that she had lied to get Hilltop to trust her. She said she only told them two things – that there was only a few Whisperers and that they shouldn’t cross her mother. Alpha wanted to know what Lydia had learnt about Hilltop. She said that it was mostly a farm, that they had supplies and basic weapons but didn’t trade.

Henry was watching them unaware that Beta knew he was there. One of the Whisperers confronted Henry who promptly knocked him to the floor with his staff. Beta grabbed Henry and dragged him to Alpha. She questioned him and he explained he was from Hilltop and came for Lydia. To try and protect herself and Henry, Lydia walked across and punched him in the face. However, the fact that she hadn’t mentioned Henry earlier just made Alpha all the more suspicious.

Later, the Whisperers arrived at their camp and got busy preparing meat from deer. Alpha tasked Beta with sorting a new walker skin for Lydia and one for Henry. We got to see the gruesome detail as Beta cut and peeled the head of a walker. Henry was tied up and left to watch the horror all around him.

Two Whisperers took issue with Alpha going against her rules to rescue her daughter. The male challenged Alpha’a leadership which meant a fight but she twisted things up. Beta held the man at knifepoint while Alpha challenged his girlfriend. It was truly chilling to watch Alpha circling her while whispering. She removed a wire from her wrist and then when behind the girl she use the wire to decapitate her. She picked up the head and passed it back to her boyfriend. Traumatised he began crying so Alpha stabbed him and left him to die. The bodies were dragged out to a nearby field to feed the walker herd.

Elsewhere in the episode we caught up with events at Hilltop and Alexandria. At Hilltop, Gabriel (Seth Gilliam) was torn about what to do about his relationship with Rosita (Christian Serratos) having learned she was pregnant by Siddiq (Avi Nash). Eugene (Josh McDermitt), still madly in love with her too, compiled an analysis of how Gabrielle and Rosita could be happy. He gave Gabriel some stretchy pants to give to her.

At Alexandria, Michonne (Danai Gurira) and the council debated what to do about the current situation. Everyone was concerned by the new threat. There seemed to be appetite to attend the Kingdom’s fair but Michonne was still against it. Gabriel was frustrated by her vetoing everything she disagreed with. Aaron (Ross Marquand) stepped up and supported Michonne.

Michonne next went to talk with Negan (Jeffrey Dean Morgan) who was back in his cell. He seems to have changed and tried to convince Michonne that he can help but she refused to listen. She later had a conversation with Judith (Cailey Fleming) and wasn’t happy that she had been talking to Negan. Judith said he’d changed and that he listens to her, unlike some people. Michonne said people don’t change but Judith argued that Michonne had. After sending Judith to her room, Michonne had a change of heart and said she wouldn’t stop Alexandria attending the fair if that’s what people wanted.

At the end of the episode, Alpha and Beta decided to test Lydia to see if she cared for Henry. They forced her to take and knife and told her to kill him. Lydia wasn’t happy about it and began to cry. Before Alpha could do anything about it, a herd of walkers overran the camp. Daryl and Connie had led them there and were in amongst them wearing walker masks. They got to Henry and ran off with him and Lydia. Alpha isn’t going to be pleased.

Can’t wait for the next episode? Check out our preview of The Walking Dead – 9×13 Chokepoint.