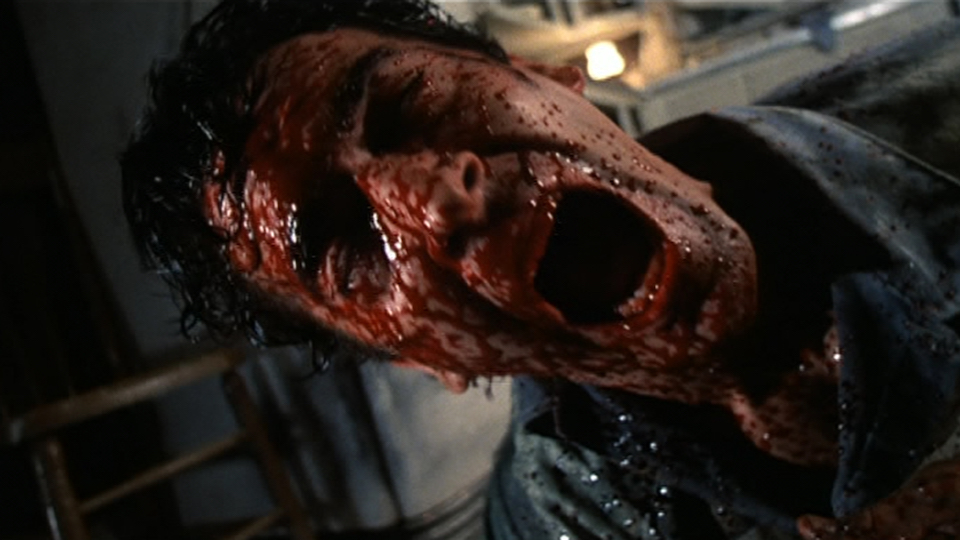 How many editions of Evil Dead II would be too many to own? Because let’s face it, there’s been quite a few. This latest from Studiocanal, gives us the first ever 4K UHD release of Sam Raimi’s horror masterpiece. Don’t worry, they haven’t eradicated all of that lovely low budget grain, but what they have done is make it look and sound fantastic. Get it on your biggest telly, crank up the volume and have your senses assaulted.

Less of a sequel, and more of an amped-up remake, Evil Dead II taps further and deeper into the thick comedic vein and horrific nightmare potential of the cabin in the woods premise. Without wanting to bury the lede of this review, let me just get it out of the way, this film is 84-minutes of horror perfection.

With a bigger budget at his disposal, Sam Raimi and his brilliant collaborators produced a relentlessly paced, deliriously funny, action-packed gore-fest, that is not just one of the most entertaining movies ever made, but one that also changed the very language of cinema. The pacing of the film, the splicing of different techniques, the use of special effects, puppetry, prosthetics, stop-motion, and the pioneering camerawork all came together to change the cinematic landscape, and not just in horror.

The plot sees Ash (Bruce Campbell) and Linda (Denise Bixler) travelling to an old cabin in the woods for a romantic weekend. The cabin unfortunately belongs to an archaeologist who has discovered the Necronomicon Ex-Mortis – aka the Book of the Dead – and just left it lying around. He has also left a tape recorder with some translated incantations from the book. When Ash and Linda listen to this, an evil force is unleashed, Linda becomes possessed by a demon, and Ash has to decapitate her with a shovel and bury her in the woods. This is all within about the first 10-minutes. And it continues like this without ever pausing for breath.

As I’ve already mentioned, from a technical point of view Evil Dead II is on another level. It’s a visual masterpiece of horror, with sensational sound design, incredible camerawork, editing, stunt work, and one of the best horror soundtracks ever composed. But it also boasts one of the all time great cult film performances in Bruce Campbell’s iconic turn as Ash Williams. His transformation from goof-ball hero to the manic, blood-soaked destroyer of evil is an absolute joy to behold. The scene where he fights his own possessed hand is an absolute master-class in slapstick physical comedy.

Disc One of the blu-ray release (or disc two if you have purchased the 4K UHD release) comes with an audio commentary from the archives, with Sam Raimi, Scott Spiegel, Bruce Campbell, and special effects supremo Greg Nicotero. This also comes on the DVD release.

Disc Two of the blu-ray (or disc three of the 4K) kicks off with a brand new documentary, produced exclusively for this release. Bloody and Groovy, Baby! A Tribute to Sam Raimi’s Evil Dead II is a loving and glowing tribute to the genius of this film, and the influence it has had on countless filmmakers and artists. There are lots of contributions from Hollywood and European film directors, most notably, Guillermo del Toro, Roger Corman, Edgar Wright, and Vincenzo Natali.

The rest of the special features have been ported over from previous special editions and anniversary releases. These include Swallowed Souls, a feature length behind the scenes documentary that first appeared on the 2011 special edition. This is the absolute definitive account of the making of Evil Dead II, and the other films in the trilogy. The only downside to this otherwise brilliant film is that Sam Raimi was off making Oz the Great and Powerful when it was produced, meaning that he is the only main player from in front or behind the camera who doesn’t feature in the documentary.

There’s plenty more goodies from the archive, including Cabin Fever – A Fly on the Wall, which is 30-minutes of behind the scenes production video diaries by the art department, revealing how they created some of the incredible prosthetic effects. This is followed by Road to Wadesboro, which is a short featurette with filmmaker Tony Elwood (who worked on Evil Dead II) reminiscing about the location shoot, and then revisiting some of the iconic locations which are incredibly still standing (sort of).

The next making-of documentary on the disc is The Gore the Merrier. This 30-minute featurette from 2000 features interviews with Greg Nicotero, Robert Kurtzman, and Howard Berger. This short focuses on the horror effects they were creating for the film.

There is also an in depth interview with Bruce Campbell, and last but not least the original trailer. This film has been release so many times in so many various editions, we’ve probably all got a copy of it somewhere. But this new one is as good as any of them. It looks good, it sounds amazing, and it’s packed with bonus features. All things considered, it’s pretty darn groovy.