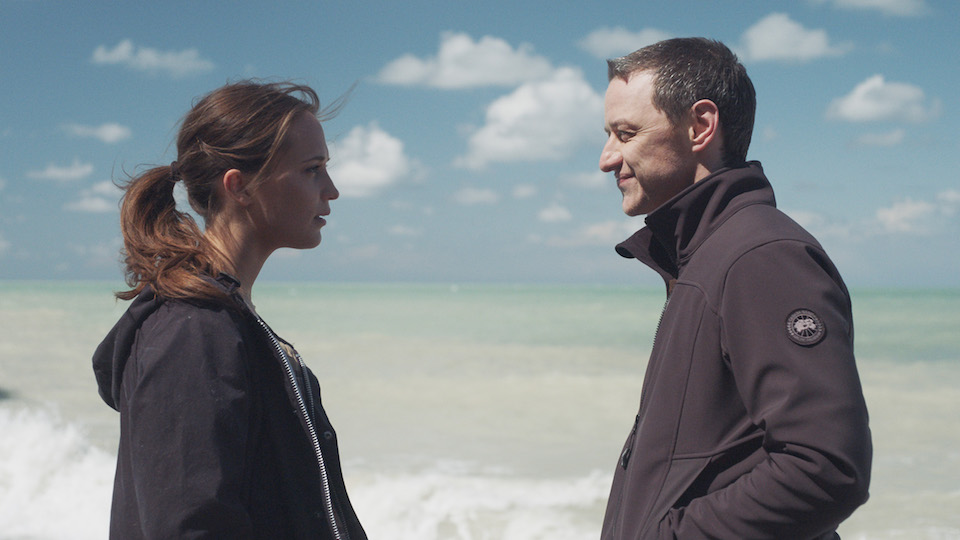 Wim Wenders directs this meandering love story, which is only just saved from the bottom of the ocean by the incredibly watchable duo of Alicia Vikander and James McAvoy. Based on the acclaimed novel by J M Ledgard, Submergence depicts two lonely souls who find each other, fall in love, but are then separated: he to a windowless cell, held captive by Somalian extremists, and her to the darkest depths of the Atlantic Ocean, on a scientific expedition.

The novel is a poetic meditation on love, death, art, science, modern geopolitics, the human condition, and our place in the world. That’s a lot of thematic meat to chew on, and it proves too much for this adaptation. You can feel it straining for resonance, but every time the film stops to try and say something, it feels crowbarred into an otherwise unexceptional romantic drama.

McAvoy is James More, an MI6 agent, whose cover is that of a hydro engineer. This enables him passage into some of the most dangerous warzones on the planet. Before going on a mission he takes a short relaxing break at an exclusive boutique hotel in northern France. There he meets Danielle Flinders (Alicia Vikander) a bio-mathematician, who is also decompressing before a long mission of her own.

There’s an immediate chemistry between them, and they soon fall in love. They go their separate ways, keen to see each other again, but James is captured and imprisoned by Somali jihadists. Danielle goes off on her expedition to the bottom of the ocean, but spends most of the remaining running time of the film staring at her phone waiting for James to text. What a waste of a terrific actress.

Wenders uses their dislocation to splinter the narrative, cutting between the two leads, and also flashing back to their romance at the hotel. McAvoy has by far the most interesting storyline; a kind of art-house version of a spy thriller, with his character sinking deeper into the world of extremism and violence. Submergence however marks another dud on Vikander’s filmography. After bursting onto the scene with A Royal Affair, Ex Machina, and her award winning turn in The Danish Girl, her choices since then have not proven good.

The film is occasionally beautiful, with enchanting visuals, and a lushly orchestrated score. And the two leads are supremely watchable, even when they are burdened with some truly dreadful dialogue. However, Submergence is a messy film. Uneven, poorly paced, and more than a bit pretentious. There are some interesting things that it’s trying to say, especially in the relationship dynamics between James and Danielle, but it just can’t find the right balance.

The Blu-ray release is exclusive to HMV. Neither the DVD nor the Blu-ray disc come with any special features.