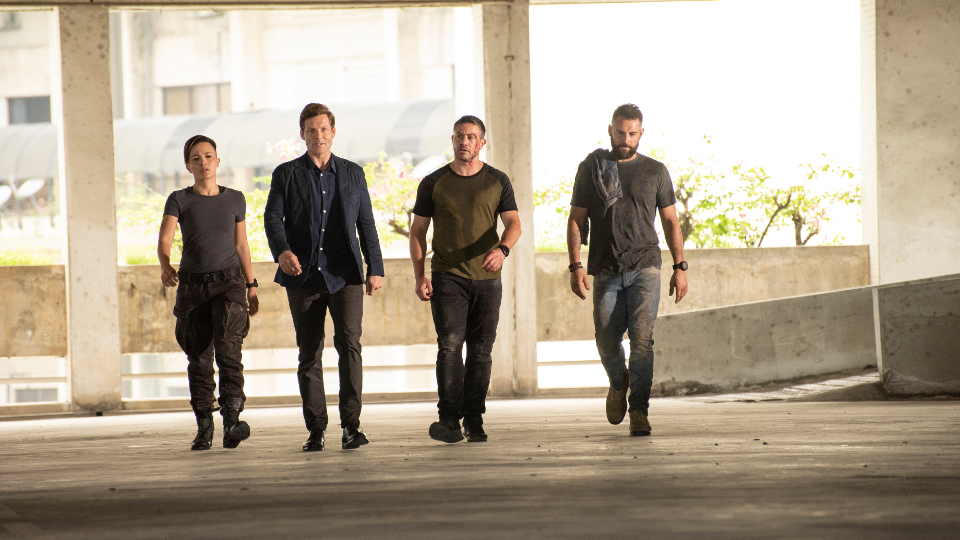 The season 7 premiere of Strike Back: Silent War (season 7) saw Section 20 reactivated and deployed to Malaysia.

The episode opened up in Kuala Lumpur, Malaysia where a woman impatiently made a phone call. She called Novin (Alin Sumarwata) who was working on a motorbike at a British Army base in Nairobi. Novin looked at her phone and the name Zoe Davis (Clara Paget) came up, she decided to ignore it. Davis left a message saying that something had come up and she needed her advice as she didn’t know who to trust.

Davis nervously made her way through the streets to a karaoke bar where she met with Russian FSB agent Katrina Zarkova (Yasemin Allen). Davis wanted to work together but Zarkova told her it was Russian business and that they would never work with the West. As Davis left, Zarvoka told a colleague that they needed to keep an eye on her.

A man followed her to a safehouse where he attacked her. He was too strong and pushed her through a window. She landed on a car below and sustained injuries from the broken glass. As she tried to flee the man appeared, shooting and killing her as she pleaded for her life.

At a British Army training unit in Nairobi, Wyatt (Dan MacPherson) was providing weapons training to some new recruits. Novin and Mac (Warren Brown) arrived to tell him that their suspension was lifted and they were being deployed to Malaysia.

They arrived in Kuala Lumpur by helicopter where they found Colonel Alexander Coltrane (Jamie Bamber) waiting for them. He briefed the team on the death of Davis who had been working a covert op. She’d gone dark and they had discovered that she had been meeting with the Russian FSB off the books for unknown reasons. Her intel was fitted with a failsafe that activated when access was attempted. Coltrane said that Mac would take the lead in the field but that they were not authorised to use force.

The team headed out to stakeout the location of the intel. They spotted FSB agents from Alpha Group on site and decided to take action rather than call it in. They ambushed one of the agents but he wouldn’t talk so they headed inside with him at gunpoint.

They walked in on the rest of Alpha Group trying to hack a British military firewall. With both sides pointing guns they began to talk but Zarkova said the death of Davis was nothing to do with them. Outside a heavily armed Triad gang arrived and headed into the building. Wyatt heard something and one of the attackers fired through the ceiling killing some of Alpha Team.

A firefight broke out and all of Alpha Team was killed apart from Zarkova. Wyatt tried to secure the intel while Mac went after the remaining attacker. Mac found the attacker upstairs but was disarmed. He could have shot Mac but instead lowered his weapon and challenged him to hand to hand combat. At first it looked like Mac had no chance but he started to give as good as he got. After being thrown down a flight of stairs the local police turned up and the attacker fled so Mac and Wyatt surrendered.

Meanwhile, Novin had attempted to take Zarkova hostage but she fled so a chase ensued. Novin tracked her to a tube station and they both boarded a train. They fought through the train until Novin got the upper hand. Zarkova explained she stole the intel from Davis’s safehouse but that it wasn’t the FSB who killed her. When the train stopped Novin let Zarkova go.

Mac and Wyatt were arrested and thrown into a cell. The pair discussed the mission and also explained why Reynolds isn’t in this season. She had taken the fall for what happened to Donovan last season. An officer came and opened the cell and requested that only Mac go with him.

Mac was interviewed by Inspector Amy Leong (Ann Truong) who asked about what happened. She said it had only taken them three hours to leave her with a body count in double figures and a situation with potentially international repercussions. She showed Mac some photographs and he recognised the man he fought. He was called Laoshu (Tom Wu) and was part of a Malaysian Triad gang. Laoshu had disappeared 8 years ago after a massacre known as the Night of Blood where he single-handedly slaughtered a rival gang. Mac suggested the recovered intel might have some clues as to what was going on.

Coltrane met with High Commissioner James McKitterick (Adrian Edmondson) to discuss the operation and to try and secure the release of Mac and Wyatt. Leong was happy to release them as they had permission to be in the country. Coltrane was fuming that they had gone against his orders and kept him in the dark. Mac handed over the intel which was damaged but they were still able to recover some of it. The intel suggested that the Russians had lost a bomber in the South China Sea that was carrying a mystery package. The package was missing and, with Davis killed over what she knew, it seemed that it must be very important so the team needed to find out what it was.

Mac and Wyatt asked Novin what happened with Zarkova and she said she had to let her go because it was a public place and security was closing in. Novin confessed to the boys that Davis had called her the night she was murdered. She felt guilty because she had ignored the call because she and Davis had previous had a fling that ended badly.

Zarkova went back to her safehouse and seemed in bad shape having sustained shrapnel injuries in the attack. She met up with another operative named Pavel (Alec Newman) and told him that the Triads knew where they were and how to attack. She also explained that the British found them due to the stolen intel. Pavel said she needed to see the Colonel but she told him to stall for her by saying she was finishing the mission. Despite her injuries she them still managed to have lots of sex with Pavel.

Back with Section 20, Coltrane briefed the team on the Triad gang. He’d identified an operations officer who he felt would know what was on the bomber. The problem was getting to him would be tough because he was kept as a prisoner of the gang at the top of a skyscraper where they could watch him. The team were sent to get him after a word from High Commissioner who requested the mission be discreet. Before they left Mac confronted the High Commissioner to ask why Davis didn’t report back to him.

Mac, Wyatt and Novin arrived at the sckyscraper with instructions to get to the 32nd floor. Coltrane reported via comms that the security cameras were offline but that it wasn’t him who disabled them. As they made their way inside they spotted some spots of blood on the floor before taking the stairs. When they exited the stairwell they found several guards had been killed and could hear gunfire from their target area.

When they got to their target they found that it was Zarkova who had beaten them. She had the target at gunpoint while she tried to get the information about the package. She surrendered her weapon and Novin tried to find out from the operator what was on the bomber. Before she could work out what he said more guards appeared and another firefight broke out. The package turned out to be a nuclear missile that had been stolen.

As more Triads turned up at the building, Coltrane told them to find a different exit. Novin was able to find out the location of the nuke but refused to share with Zarkova. She also tried to find out who was behind the theft and was given the name Kingfisher. The boys fought their way to the roof to avoid the incoming stream of Triads. Meanwhile, Novin fought to the roof with help from Zarkova.

Downstairs Laoshu entered the building as the team fought for their lives on the roof alongside Zarkova. Running out of bullets and still surrounded thinks looked bleak until Coltrane turned up in a helicopter to extract them. Laoshu watched as the helicopter flew away.

Can’t wait for the next episode? Read our Strike Back: Silent War episode 2 preview.