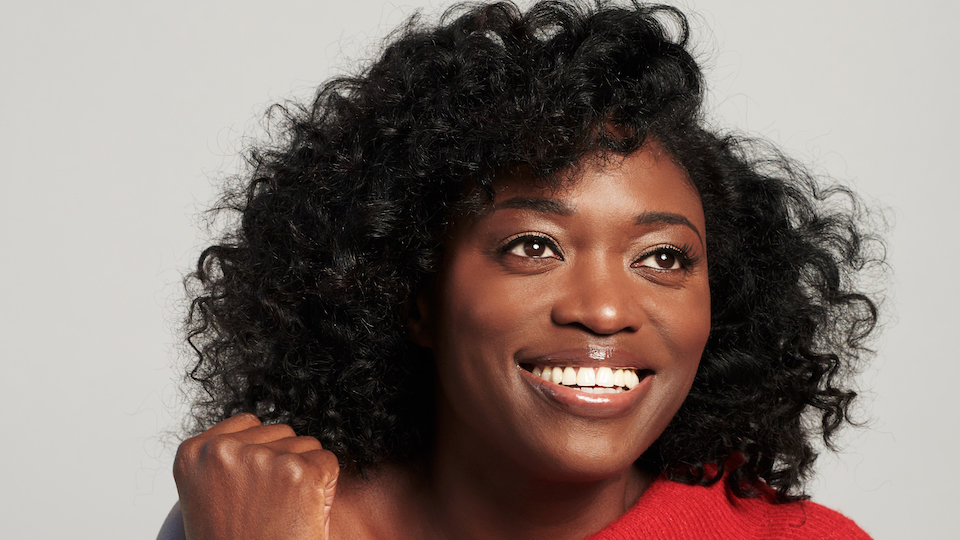 The challengers risk everything as they race through the night from London to northernmost Scotland in their pimped-out, weaponised vehicles to win the ultimate prize — freedom from the totalitarian government curfew that controls their lives.

The cast of Curfew also includes British comedian and actress Andi Osho, who recently spoke to Entertainment Focus about her exciting role as Jenny Donahue.

Andi, tell us about why you got into acting?

After GCSEs and A Levels I got a job in TV but I never thought I could be in front of the camera. I just thought now you’ve got your education go and get a sensible job and that was the direction I was heading in as it didn’t occur to me that someone like me could go on to become an actor. Then I had some sort of quarter life crisis or something, I had this feeling that although while I was enjoying what I was doing it wasn’t quite what I was after. It wasn’t satisfying me fully and I didn’t want to die having not giving acting a try, basically. I even said to my teachers that I had ‘If I’m shit at this, do feel free to tell me but I just want to try it’. Know that on my death bed I tried something that I really, really wanted to do and if it works out then happy days!

And it has! What would you say is your biggest telly role then?

Definitely Curfew and I’m not being flippant when I say that. Up until that point, before I started doing stand up, I was doing little bit parts here and there in Eastenders, Casualty and Holby City. Then the work started drying up and, because I wanted to keep getting stage time, that was the reason I started doing stand up. That was my motivation behind it at the time and then it sort of escalated. It got a bit out of hand, basically! So in terms of as an actor the biggest thing I’ve done is Curfew and as a stand up definitely Live At The Apollo was the biggest gig I’ve done.

So have you turned your back on the comedy side now or are you going to return one day?

It’s kinda weird not doing stand up because I feel like a civilian now. I got quite jaded by the comedy business  – not comedy but the business – which is why I stepped away from it. I thought ‘What do I really want?’ And my first love was acting. It’s not to say that I’d never go back to stand up but there’s so many things that I’m interested in exploring. I’m not quite ready to go back to the clubs just yet but I do think of material and jokes and think, ‘When I do go back this is the sort of thing I’m going to do.’ So, there’s obviously a part of me thinking, ‘It ain’t over yet!’

So tell us about Curfew then, how was it filming alongside all those big names?

You quickly get used to seeing these guys around because we were just in the trenches together. It was night shoots and it was cold and there was a lot going on. It was very slow paced because of all the stunts and the amount of technical stuff that had to happen with the SFX so these things take time. You just get to know people. There was only one time I completely made an idiot of myself. Michael Biehn is on the show and I’m a massive fan of Aliens and the Terminators so when I found out he was going to be on the show I was like ‘WHAT?’. When I went to speak to him I kinda went just creepy and weird. [Laughs] I said, ‘It’s really special to me that you’re here’ or something like that and he was looking at me obviously thinking ‘OK, where’s security?’ Weirdly, he’s the only one where I got starstruck. I was like, ‘Oh My God, it’s Hicks!’

You turned into a fangirl! Does that ever happen if you meet a fan of yours?

Never in my life! I’ve never had an overwhelmed fan come up to me, most people approach me and I think they’ve recognised me but they’ll just ask me where the nearest Tesco is. [Laughs]

It’ll happen once Curfew airs! Can you tell us a little bit about your character Jenny Donahue?

Yes, Jenny is married to Adrian Lester’s character, Simon. They’re a very sort of run-of-the-mill family, Jenny’s a stay at home mum and looks after her teenage kids and runs the house. She’s totally fine with this totalitarian government and the curfew and everything, she almost wants it because it makes her feel safe as she’s quite a fearful person. So when her husband tells her that they have to enter the race because of something that her son had done she doesn’t want to do it at all. She’s about protecting her family and looking after the people she loves, that’s her motivating factor in all things she does but she’s terrified as well. So she grows quite a lot through the course of the show because of everything that she has to go through.

It must have been a fascinating character to play then because of the journey that she goes on?

Yeah it’s fun to get your teeth into something meaty. Early on in my career I was playing nurse no.3 with one line or kicking down a door as police officers so it’s really nice to be able to get inside a character, find out what motivates her and create a whole world for her. How she feels about things and her family and all that sort of stuff.

Was there anyone particularly on set that you made a pal of then?

The guy I got on with the best was called Elijah Rowan who plays my daughter’s boyfriend! We had really good banter on set. You never know who you’re going to connect with but we just got on really well. Aimee Ffion Edwards, we get on great, she is a really cool chick. Adrian Lester is a great bloke, too, such a lovely person to be around.

Obviously this is the first season of Curfew, can you tell us if there’ll be another to look forward to yet?

They have neither confirmed or denied! We’ll probably find out after episode one goes out.

Have you any other projects coming up that we should know about?

I’m writing a book. It’s a novel, I’m working with Harper Collins, and I’m hopefully coming to the end of the process. They say everyone’s got a book in them but they don’t realise how hard it is to give birth to these things! It’s been a sort of two year labour but I’m hoping it will be out later this year or early next year. It’s a chick-lit comedy, based on my personal experiences of dating, which I’ve talked about in my stand up, there’s real anecdotes in there so it’s kinda my way of doing an autobiography when I know I’m nowhere near famous enough to write one!

What would you say to your younger self or anyone else who wants to get into acting?

It’s harder than you think it’s going to be. The worst thing that can happen is that it doesn’t work out. The bottom line is always just go for it. I talk about this on Sunday nights on my instagram feed, having a conversation about a different topic each week and the audience has grown. I want to empower other creatives to be able to go for it as well. What I’ve noticed is that there’s a lot of negative or mundane conversation about creativity but I want to talk about what’s magic about what we do.

Curfew is an 8-part Sky Original Production, from Tiger Aspect Productions in association with Moonage Pictures, will be available exclusively on Sky One and TV streaming service NOW TV.

Tune in to Sky One at 9pm tonight (Friday 22nd February) to see the first episode.