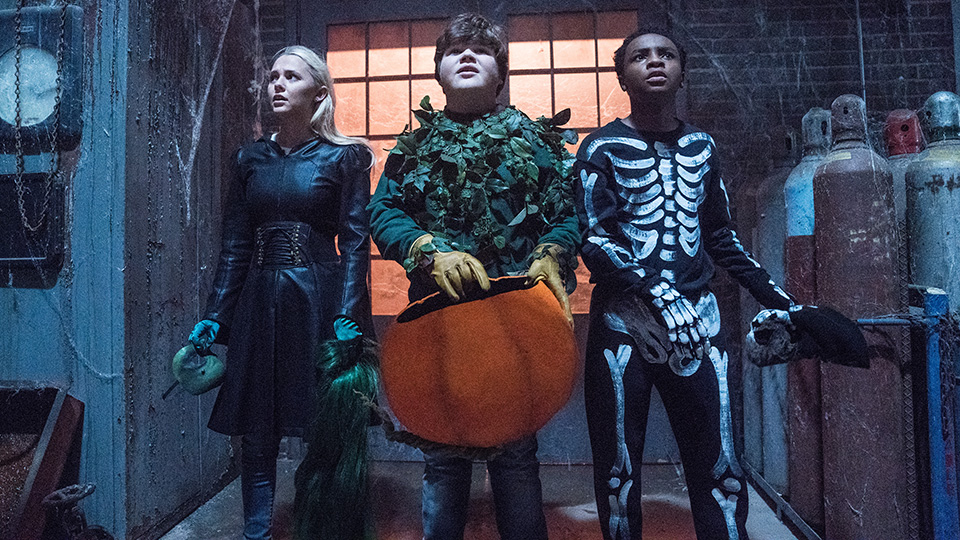 With a new director, new writer, and all new cast at its disposal, Goosebumps 2: Haunted Halloween comes up somewhat short of its 2015 predecessor. Based yet again on the on the long-running series of short horror novels for kids by prolific author R.L. Stine, the film sadly doesn’t have enough scares or laughs, and nowhere near enough Jack Black to make it work.

Madison Iseman plays Sarah, a high school senior who has been lumbered with the responsibility of babysitting her younger brother Sonny (Jeremy Ray Taylor) and his friend Sam (Caleel Harris). The two boys have started their own junk collecting business, the Junk Bros. and their first job is at a dilapidated house where they find a locked book and a key. Upon opening the book, they discover Slappy, the ventriloquist dummy from the first film.

The boys take Slappy home, and soon learn that the creepy giggling puppet is alive, and has a dastardly plan to bring Halloween to life. Soon all manner of ghoulish fun is unleashed on their small town, and only Sarah, Sonny, and Sam can stop it. Unfortunately, Goosebumps 2: Haunted Halloween is not nearly as ghoulish or fun as it should be.

It’s bright and silly, and harmless enough for kids, but I suspect even the most easily entertained child will soon be bored by the overwhelming dullness of this sequel. As for the poor adults who will have to sit through this, it will almost certainly elicit tiresome speeches about how horror movies for kids were so much better in their day. They wouldn’t be wrong.

There’s no real thrills or perils to be had, and apart from a few giggles thanks to the likes of Wendi McLendon-Covey and Ken Jeong, it’s not exactly a laugh riot either. The special effects have an adorable Scooby-Doo quality about them, and the attack of the gummy bears sequence is quite amusing. But that’s about it.

Slappy (voiced here by Mick Wingert rather than Jack Black as per the original film) should be a thing of nightmares for kids, but is nothing of the sort. I know they don’t want to traumatise kids these days, but there’s some basic cinematic technique when it comes to films with creepy puppets, and they just haven’t bothered to utilise any of it.

The biggest problem for the film however is Jack Black’s minimal involvement. It was such an inspired idea in the first film to cast him as R.L. Stine, and his performance was a blast of fun. When he turns up in the sequel for a brief cameo in the final act, he is the best thing in the film. It gives Goosebumps 2: Haunted Halloween the kick of wit and arch silliness it so desperately needed.

The blu-ray release comes with a fair to middling selection of bonus content. There are a couple of deleted scenes, and a gag-reel almost entirely comprised of Ken Jeong making himself and rest of the cast laugh. There is a ten-minute behind-the-scenes featurette, with all the main cast and crew talking us through the development and production of the film.

Meet the Monsters is another behind-the-scenes piece, focusing on all the various monsters and creatures designed for the film. Next up is Science with Slappy, which is an annoying series of short science experiments that are obviously aimed at getting kids interested in science. Which is cool. But as an adult, I found it very annoying.

Though it pales in comparison to the next thing on this disc, which is Slappy-Oke sing-alongs. Let me assure you, it is as gratingly hellish as it sounds. The disc rounds things off with a spoof advert for the Junk Bros. with Jeremy Ray Taylor and Caleel Harris. Last and most certainly least, is Slappy’s Audition. It might be quite funny, I honestly can’t say. At this point I have really gone beyond my Slappy quota for one evening.