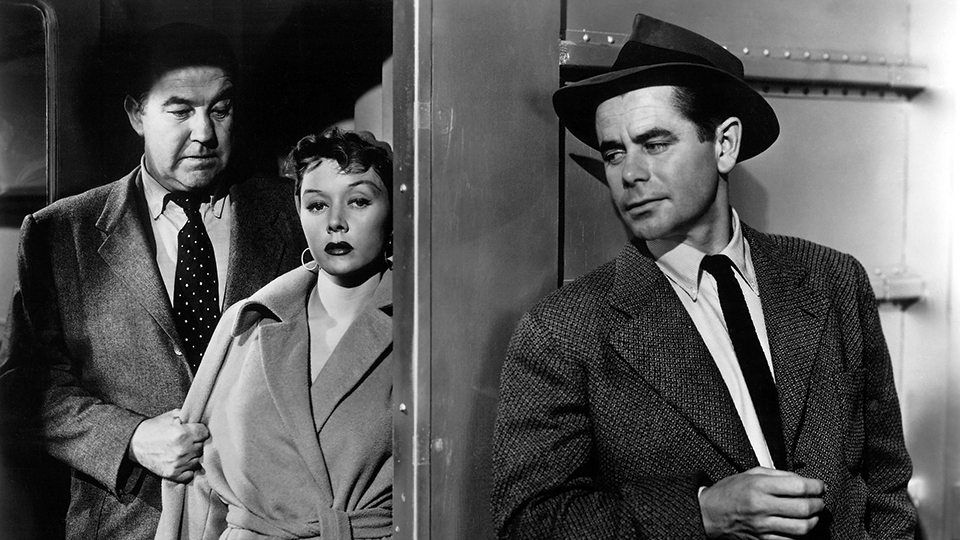 Eureka Entertainment to release Human Desire, a hard-edged and chilling film-noir from legendary filmmaker Fritz Lang, starring Glenn Ford and Gloria Grahame, as a worldwide premiere on Blu-ray in a definitive Dual Format edition as part of The Masters of Cinema Series from 11th February 2019.

A startlingly dark, late film noir masterwork by director Fritz Lang, Human Desire reunites Lang with his hero Glenn Ford and femme fatale Gloria Grahame from the previous year’s The Big Heat and the screenwriter of Lang’s 1952 noir Clash by Night, Alfred Hayes. Like those two classics, Human Desire finds Lang casting a pitiless eye on all of the human weaknesses that define film noir: deception, infidelity, passion, and murder.

Adapted from the same Émile Zola novel previously filmed by Jean Renoir in La Bête humaine (1938), Lang’s gripping thriller has Ford as train engineer Jeff, just home from the Korean War. He’s instantly attracted to passenger Vicki (Grahame), not yet realising that she’s the abused wife of Jeff’s alcoholic railroad yard superior Carl (Broderick Crawford) — or that Vicki was just entangled in a jealousy-fuelled murder committed by Carl. As Jeff and Vicki embark on a steamy affair, she tells him about the crime, and Carl’s blackmail hold on her. If only Carl could be taken out of the picture…

The only thing that’s not pitch black in this noir are the ethical shades of grey inhabited by all its characters. Yet its placid small town setting also offers a unique perspective on the genre, with Lang uncovering sinister secrets on these quiet streets that could rival any big city immorality. The Masters of Cinema is proud to present one of this brilliant filmmaker’s most underrated films for the first time ever on Blu-ray.

Human Desire, a hard-edged and chilling film-noir from legendary filmmaker Fritz Lang, is OUT NOW on Dual Format and can be purchased here https://amzn.to/2R6tKPl.

To celebrate the release of Human Desire we’ve got 3 copies on Dual Format to give away. Enter below for a chance to win…