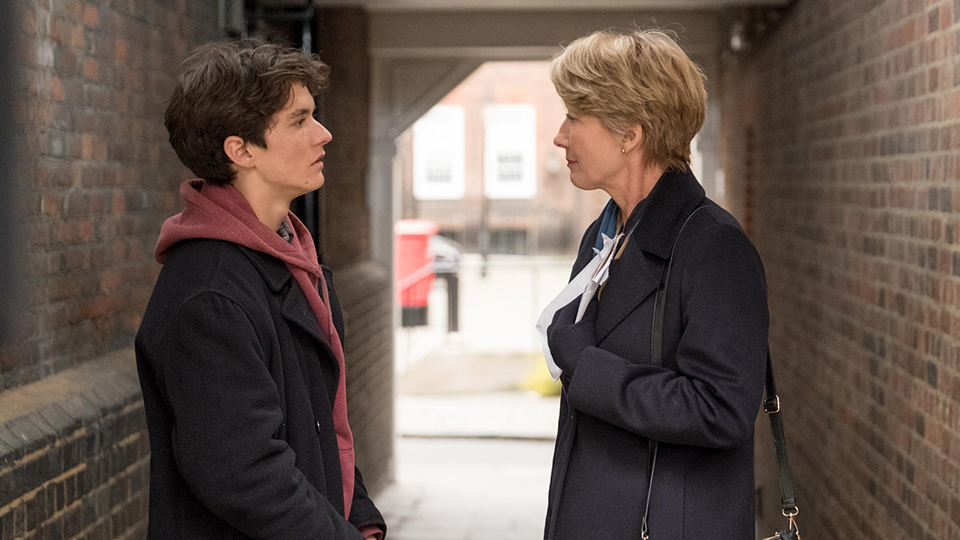 Fiona Maye (Emma Thompson), a renowned judge in the Family Division of the High Court, is pulled onto a case where she must make a ruling on the medical treatment of Adam (Fionn Whitehead), a young man refusing a blood transfusion on religious grounds. Knowing that the transfusion will keep him alive but that ruling for him to have it will alienate him from his family, Fiona goes to the hospital to speak to Adam before making a decision over whether he will live or die. Once the two meet, an unexpected bond forms that has lasting consequences.

The Children Act is based on the novel by Ian McEwan, who also wrote the screenplay, and it’s a fascinating exploration of the moral issue of allowing religion to overrule medical decisions. Having come off a particularly tough case about conjoined twins, Fiona is already feeling the pressure and judgement from the media before she makes a ruling on Adam’s situation. Completely consumed by her heavy workload, Fiona has unwillingly neglected her marriage to Jack (Stanley Tucci) who blindsides her by asking her permission to have an affair as he doesn’t feel sexually satisfied in their relationship.

All of these pressures pile on top of Fiona as she tries to determine Adam’s case and she’s not wholly convinced that he’s not bowing to the pressure of his deeply religious Jehovah’s Witness parents. The first meeting between Fiona and Adam is powerful. She sees him lying in his hospital bed and they unexpectedly sing together. Fiona leaves and makes her decision, unaware of what that will mean for Adam moving forward. What follows from there is an exploration of how Fiona’s decision impacts on Adam’s life and indeed how it has a knock-on effect for her own life.

Emma Thompson is absolutely magnificent as Fiona. There’s a reason why she’s considered to be one of our finest actresses and she’s masterful here. She manages to expose the harder side of Fiona and also reveal the vulnerability that lies under it. Her scenes with Stanley Tucci are powerful but it’s when she’s on screen opposite Fionn Whitehead that provide the film’s best moments. Whitehead’s character undergoes a transformation and the actor really gets under the skin of Adam. His performance is emotive and moving.

The special features on the Blu-ray release are limited with only a handful of interviews with the main cast and creatives on offer.

The Children Act is a fantastic drama and one that takes you to places you probably won’t expect. It’s very emotional and deeply moving, and dare we say you should keep the tissues handy. This is British drama at its finest and it’s Thompson’s best movie in a long time. It’ll also ensure that Fionn Whitehead continues to ascent to stardom as well as cementing Ian McEwan as one of our most cherished writers.