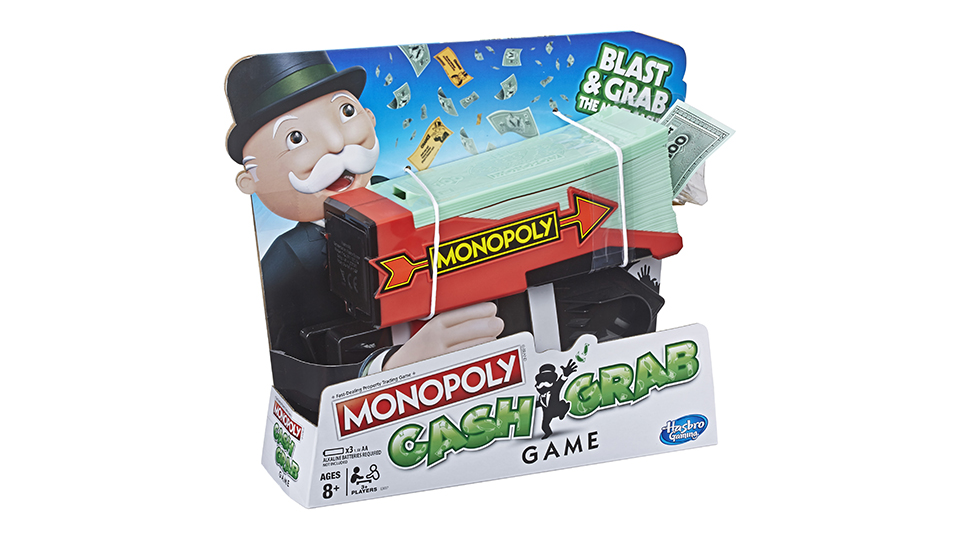 Monopoly is an iconic board game that has been around since 1935. During that time the game has endured, being passed down from generation to generation and in more recent times, Hasbro Gaming has released lots of variations incorporating classic films and TV shows into the mix such as Game of Thrones, Stranger Things and Friends. Trying something a little different, Hasbro Gaming have released Monopoly Cash Grab, which takes some of the essence of the original game and creates something new.

Monopoly Cash Grab does away with the usual Monopoly board. Instead you get a money gun that attaches to a spinner. At the start of the game you load up the gun with bank notes and Chance cards, then place it on the spinner and spin it to determine who plays first. Whoever the spinner points at must then pick up the gun, hold it in the air and press and release the trigger to start the game. The gun fires out money and chance cards, which the players have to grab as many of as they can.

The objective is to collect as much money as you can before the gun is empty and the game comes to an end. I was sceptical as to how long the game would last as the stack of money you get doesn’t look like that much. That’s where the Chance cards come in and extend the duration of the game. You can play a Chance card at any time during the game except when the spinner is in play. Offering a range of activities, the Chance cards can force players to swap money stacks, return someone’s money to the gun and fine everyone to make them pay you money. There are a few different types of Chance cards but essentially, they help keep the money flowing.

There’s really nothing more to the game than that really. There are a few issues with the game though. Firstly the person operating the gun is also able to grab cash but that proves quite difficult when you have one hand already occupied. Secondly if you have aggressive players, you may find that the money gets damaged, creased and even destroyed. This means you can’t use it in the gun any more but you can buy additional money stacks should you need to.

I played Monopoly Cash Grab a few times with differing numbers of players. It’s definitely more fun with more players. It advises that 3 players are the minimum but I’d suggest you want at least 4 to keep the game fast moving and challenging. It also makes it more chaotic, which adds to the fun!

Monopoly Cash Grab is an interesting spin on the classic game and it is fun. The games tend to last around 30-minutes, depending on how many Chance cards you decide to play, and it’s fairly fast moving. The simple premise makes me wonder how likely you are to keep returning to it once you’ve played it through a few times. I can see it being fun to play at a party, especially after a few drinks (for the adults of course) but the long-term appeal is probably pretty limited.