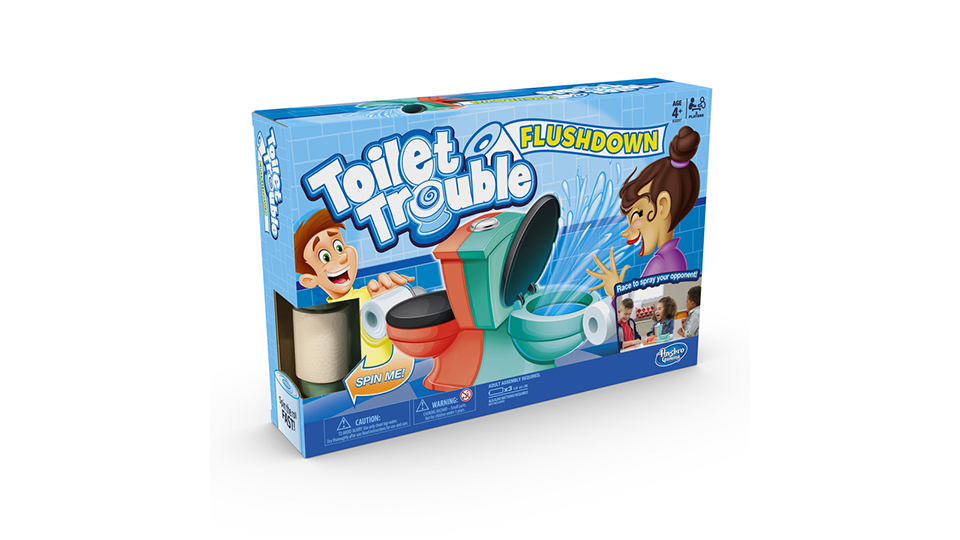 What is it about toilets that keeps kids, and to be honest most of us adults, so amused? A basic human need we all have, is somehow hysterically funny so much so that we have games based around toilets now. 2016’s Toilet Trouble was a hit so it’s no surprise that two years later a sequel of sorts has arrived. Taking the basic premise of Toilet Trouble, Toilet Trouble Flushdown pits two players against each other in a race against time.

Like Toilet Trouble before it, Toilet Trouble Flushdown has a very simple objective – don’t get squirted in the face by your toilet. Yes that’s right, you need to avoid a small but surprisingly powerful jet of water from hitting you in the face. Toilet Trouble Flushdown features two toilets enabling two players to sit opposite one another. Once you go through the basic set-up – attaching the lids, filling the bowls and flushing the toilets (complete with realistic flushing noises) – it’s time to take on a challenger. The aim of the game is to spin the toilet roll positioned in front of your toilet, as fast as possible. The faster you spin, the closer your toilet lid gets to closing. Once it closes, the other player receives a jet of water to the face and you’re declared the winner.

The game really is that simple. There’s nothing more to it and it does exactly what it says on the tin. I have to admit that the rounds I played, I found absolutely hysterical. It’s oddly worrying that you can get so competitive about closing the lid of a plastic toilet and the irrational fear of getting squirted in the face with water increases with every replay. With my chosen opponent, we got locked into a series of best of 3 games and after a few rounds, we both found our hands were aching from attacking the toilet roll in a bid to spin it the quickest.

While Toilet Trouble Flushdown is undoubtedly aimed at kids, there’s enough entertainment value for adults too. Where the game may not translate quite so well between the ages is when it comes to replay value. The novelty wears off fairly quick for adults but for kids it’s the kind of game they’ll keep going back to. Its short length makes it perfect to kill a bit of time and keep the kids quiet while you get on with something else.

Toilet Trouble Flushdown is a lot of fun and you’ll laugh plenty while playing it. My main concern is around the replay value, especially given that a round lasts less than a minute. Kids will find the game hysterical and getting hit in the face with water will likely be treated as a prize rather than a punishment. Hasbro Gaming have adapted a very simple concept and given it new life, and Toilet Trouble Flushdown is sure to find its way into plenty of homes.