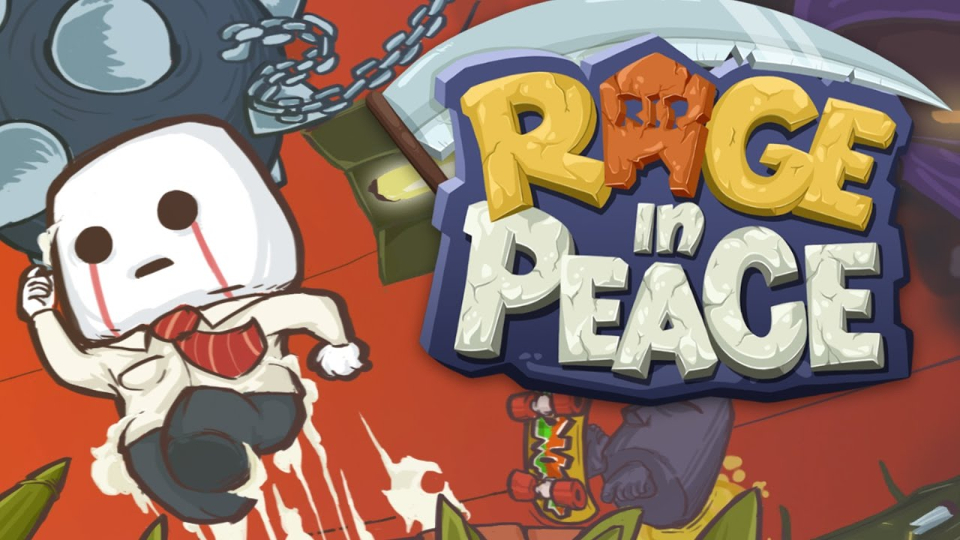 What would you do if, whilst in the lift on your way into the office, the Grim Reaper approached you and told you that you were going to die today? In the case of young Timmy Malinu his first thought is ‘will it be the way I’ve always dreamed, at home, in bed, in my pyjamas?’ An odd reaction but herein lies the purpose of the game; get Timmy home so that he can die in his pyjamas rather than by being beheaded by pretty much everything in the universe. This is 2D side-scrolling at its most illogical and infuriating. Perhaps fitting for a game called ‘Rage in Peace’.

In terms of graphical style the game is more akin to The Binding of Isaac than anything like Super Mario Bros and it certainly has its charm. It is well rendered and has sufficient depth. The character of Timmy is disturbing to say the least. He looks like an emo version of the doll from the front of a Korn album and is constantly crying diluted blood tears. Admittedly if I lived in a world where a puddle in my office would suddenly turn to ice and stab me, inexplicably knocking off my head, I think I might be inclined to be a bit teary. The soundtrack is excellent and is always perfect for the level, there is an eclectic and wholly unexpected blend of musical styles which was one of the standout features of the game. They can often overshadow the actual gameplay though as we will come on to, that isn’t saying much.

Watch the Rage in Peace release trailer below:

I understand the point of this game but I found it genuinely infuriating. Had I not had to write this review I would have turned it off within 10 minutes. It is the gameplay and more broadly the concept that I have the most issue with. This is not a game of skill, it is a game of memory. You walk down a corridor and get killed by something you could never predict. This is not like the old school side-scrollers that made sense, no, in this world there can be nothing at all to harm you until a ghost leaps out of a computer and knocks off your head. Then it’s back to the checkpoint to do it all again only this time remembering that there is a ghost in that particular screen. The next time you’ll get a little further until a skateboarding statue from Easter Island runs over your feet which again, inexplicably decapitates you. Then it’s back to the checkpoint again. This goes on and on and on and on. I love a good side scrolling game. I adore the most challenging titles in this genre. Castlevania was infuriatingly hard, but it was glorious because you could improve your ability to play the game and, though the levels increased in difficulty, you got better. This is not the case in Rage in Peace. This is inane trial and error ad infinitum.

This brings me on to one of the most irritating aspects of the game. I know it’s small, I know it’s petty. I know it doesn’t matter. BUT. The fact that no matter where, how and by what I got hit, Timmy’s death was always the same decapitation became as much a source of annoyance as the game itself. I know that the Grim Reaper said he would be decapitated but come on, that strikes me simply as lazy animation which they have tried to cover up by crowbarring in a line to the intro. It’d be like if in Metal Gear Solid, Snake always died by falling to the left no matter where the blow had come from and in the intro Kojima put in a line that said ‘By the way Snake you are wearing top secret armour that will protect you from bullets, we ran out of money so you only have 3 limbs covered though’. This really grated on me fast.

Watch the Rage in Peace story trailer below:

Throughout the game you get little snippets of Timmy’s life which give you a backstory to him and I will admit that this aspect of the game was touching. His journey to this point is one that does make you empathise with the character and want to help him. This aspect was unexpected and totally out of sorts with the rest of the game.

I am sure that there will be people who will love this title. They will want to go through the different gameplay modes, they’ll want to get through each ludicrous stage without dying once. I know that the point of this game is to be infuriating. On that point, it succeeded. However, I go into games looking to be entertained. I want new experiences, I didn’t want a new laptop. Thanks to Rage in Peace I now need one.

Rage in Peace was reviewed using a digital code supplied by the publisher.