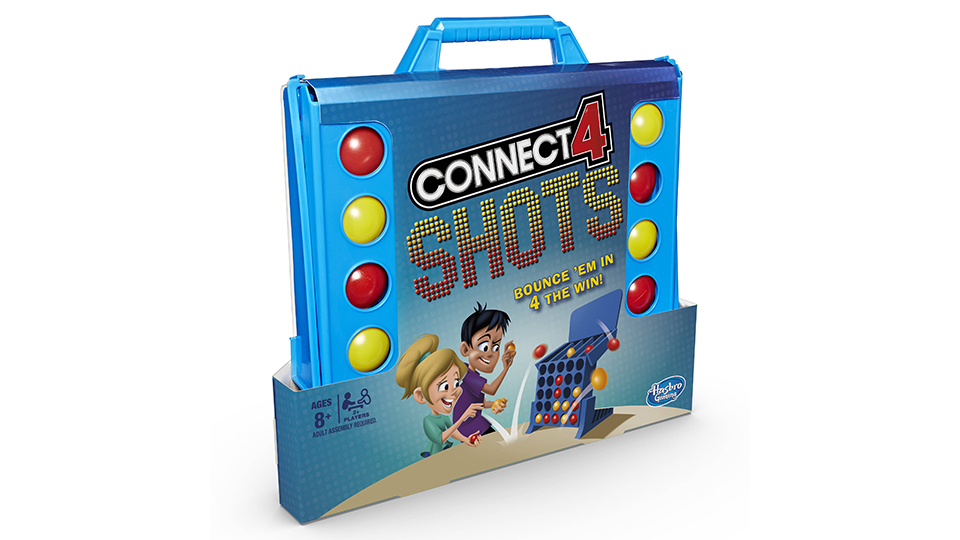 Connect 4 is one of those games that’s managed to transcend generations retaining its popularity among players of all ages. I remember playing some very competitive rounds with the family when I was a kid, and I still like an occasional game now. Well in a bid to keep up with the times and add a new layer to the game, Hasbro Gaming have evolved classic Connect 4 into Connect 4 Shots. Fear not, it’s not an adult drinking game, rather a cross between Connect 4 and Beer Pong, but without the beer.

Connect 4 Shots keeps the blue grid but instead of yellow and red counters, you now get yellow and red balls. The grid is substantially bigger and the back of it folds into a tray at the top, which houses the title card and acts as a barrier in an attempt to keep the fun of the game a little more contained. You can play Connect 4 Shots with 2 people or you can split groups into two teams. The essence of Connect 4 remains – each player has to get their colour into the grid and make a line of four to win. The twist here is that you don’t drop counters in one after the other, instead you bounce your coloured balls into the grid.

Making the game even trickier, both players (or teams) play simultaneously so the game is pretty frantic and it’s harder to strategise. The first few times I played it, I was just happy I managed to get any balls into the grid at all. The rules state that you can replay any balls that bounce past the grid (or in my case into the kitchen, the dog’s water bowl and the mop bucket) but if any land in the tray at the top of full row, they are out of play. Now take my advice here, if you’re going to play Connect 4 Shots try your best to play it in a contained area. Playing it in an open plan kitchen/dining area led to chaos but to be honest it was still a lot of fun.

Once all of the balls have landed in the grid, or on the tray, if no one has managed to get a row of 4 there’s an orange tie-breaker ball. You take it in turns to play it, the person who got rid of all their balls first, and the first person to get it in the grid wins. It’s a neat addition to the game and I felt my competitive streak reach an all-time high when I realised sudden death mode was about to set in.

Connect 4 Shots Is a heck of a lot of fun. It can be played by kids or adults, and is a fantastic party game. Beware that chaos will ensue as the balls bounce everywhere but into the grid but be prepared for plenty of laughs. It also proved to be a great workout and I found myself out of breath after several matches from all the running around hunting for my stray balls. Hasbro Gaming have successful put a new spin on an old classic with Connect 4 Shots and it will be getting played plenty in my house.